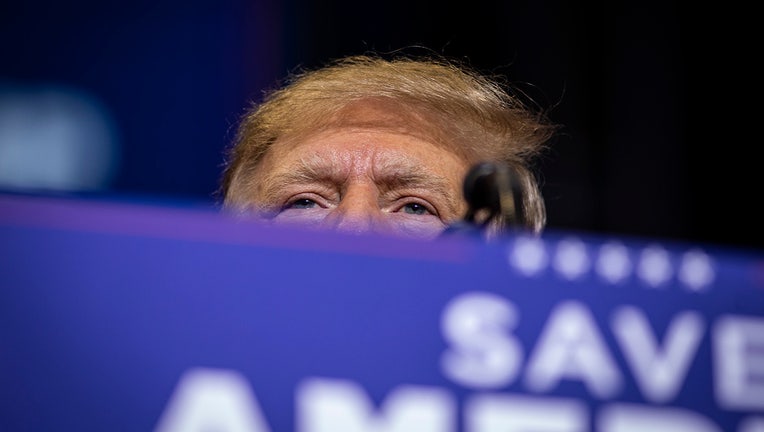 DENVER - Republicans in Colorado rejected two prominent candidates whose political profiles were centered on election falsehoods in a fresh reminder that fealty to former President Donald Trump's lies about mass voter fraud is no guarantee of success with conservative voters.

Tina Peters, the Mesa County clerk who became nationally known after being indicted for her role in a break-in of her own county election system, lost her bid for the GOP nomination for Colorado secretary of state. Instead, Republicans selected Pam Anderson, a critic of Trump’s election lies and a former clerk in suburban Denver who is well-regarded among election professionals. She is now positioned to challenge Democratic Secretary of State Jena Griswold.

"I will continue my fight for restoring the confidence of Colorado voters against lies and the politicians or interest groups that seek to weaponize elections administration for political advantage," Anderson said after her victory.

One of Peters’ top Colorado allies, state Rep. Ron Hanks, lost his bid for the party’s Senate nomination to Joe O’Dea, a businessman who has repeatedly acknowledged that President Joe Biden legitimately won the 2020 election. That was a sharp contrast with Hanks, who attended the Jan. 6 rally in Washington, doesn’t believe Biden is a legitimate president and says he discovered a new, animating purpose fighting election fraud after 2020.

Greg Lopez, a former suburban Denver mayor who was placed on the ballot after promising the state GOP convention that he’d pardon Peters if elected governor, lost the nomination for that post to Heidi Ganahl, a member of the state university board of regents and a more traditional Republican. She'll campaign against Democratic Gov. Jared Polis in November.

In other elections beyond Colorado on Tuesday, Trump's efforts to rewrite the results of the last campaign seemed to lack a punch. In Mississippi, Rep. Michael Guest, a Republican who bucked Trump to vote for an independent Jan. 6 commission, beat back a challenge from an air force pilot. And in Oklahoma, Sen. James Lankford easily defeated a GOP primary challenge from an evangelical pastor who complained he hadn’t echoed Trump’s election lies.

The contests played out at the midpoint of a primary season that has tested the resonance of Trump's elections falsehoods, which have been roundly rejected by elections officials, his own attorney general and the courts, including by judges he appointed. Trump has had some success this year, with candidates who deny the results of the 2020 election having won GOP primaries for the chief elections post in Alabama, Indiana, Nevada and New Mexico. In Pennsylvania, Doug Mastriano, who was at the U.S. Capitol on Jan. 6, won the GOP nomination for governor and, if elected, would be in position to nominate the secretary of state to oversee elections.

But there have been other notable high-profile defeats, especially in Georgia, where Trump recruited challengers to the Republican governor and secretary of state who refused to improperly declare him the winner of the state in 2020. Both easily beat back their challenges.

Trump did not formally endorse Peters or Hanks, though Peters appeared at his Florida resort and counts among her top backers his former national security adviser, Michael Flynn.

At her party south of Denver, Peters indicated she'll continue to disbelieve election results. Donning a T-shirt emblazoned with "#JailJena" in a reference to the Democratic secretary of state, Peters claimed with no evidence there was fraud in Tuesday's election and that "looking at the results, it’s just so obvious it should be flipped."

The primaries were held at a volatile moment in the nation's politics, just days after the Supreme Court revoked the constitutional right of women to obtain an abortion.

After that ruling, abortion took on a greater role in Colorado's Senate race. O’Dea is a rare Republican supporter of most abortion rights. He backs a ban on late term abortions but said the decision earlier should be between "a mother and her God." He will face Democratic Sen. Michael Bennet in November. Bennet won his toughest race in 2010 by slamming his GOP challenger for opposition to abortion rights.

Hanks opposes abortion in all circumstances, including rape, incest or to save the mother’s life. Viewing him as the easier candidate to beat in November, Democrats spent more than $4 million unsuccessfully boosting his candidacy.

A similar strategy worked in Illinois, where state senator and farmer Darren Bailey gained a late-stage endorsement from Trump over the weekend. Democrats also spent more than $16 million to elevate him over Richard Irvin, the first Black mayor of Aurora, the state’s second largest city. Irvin was seen as a far more formidable challenger to Gov. J.B. Pritzker, and was backed heavily by Republican donors.

Speaking at his victory party, Bailey said he was standing up for "regular people" and vowed to outwork Pritzker and win in November.

"Now the elites and the press say that Pritzker’s a shoo-in. They say our fate’s set, that a farmer can’t beat a billionaire," Bailey said. "Friends, the funny thing is, these same people said we couldn’t win the primary."

Beyond Colorado, Illinois, Mississippi and Oklahoma, elections were held in Utah, New York, Nebraska and South Carolina. Tuesday marks the final round of multistate primary nights until August, when closely watched races for governor and the U.S. Senate will unfold in Arizona, Wisconsin, Florida, Missouri and other states.

Not all races were decisive rejections of election denial. In Utah, two Republican critics of Trump unsuccessfully targeted Sen. Mike Lee, accusing the two-term senator of being too preoccupied with winning the former president's favor and helping him try to overturn the 2020 presidential election.

Other than the governor's race primary, Illinois also featured two, rare incumbent vs. incumbent congressional primaries as a result of House districts being redrawn during last year's redistricting. Democratic Rep. Sean Casten defeated Rep. Marie Newman in a Chicago-area district. And GOP Rep. Rodney Davis, one of the last moderates in the Republican caucus, fell to Trump-backed Rep. Mary Miller, who at a rally with the former president this weekend described the Supreme Court decision as "a victory for white life." A spokesman said she meant to say "right to life."

In the smaller towns of Illinois, conservative voters were hankering for a change. Toni Block, 80, of McHenry, about 45 miles northwest of Chicago, voted for Bailey in the gubernatorial primary.

"He’s got all the good things that we need to get back to," Block said. "Not only is he a Trump supporter, he has our values."

In Mississippi, six-term Republican Rep. Steven Palazzo lost his primary after a report from the congressional ethics office last year accused him of misusing campaign funds.

In New York, Democratic Gov. Kathy Hochul, who became the state's chief executive last fall when Andrew Cuomo resigned during a sexual harassment scandal, easily fought off primary challenges from the left and center. She will face Rep. Lee Zeldin, who won the GOP's nomination against a field that included Andrew Giuliani, the son of former New York mayor and Trump confidant Rudolph Giuliani. Trump did not make an endorsement in the race.