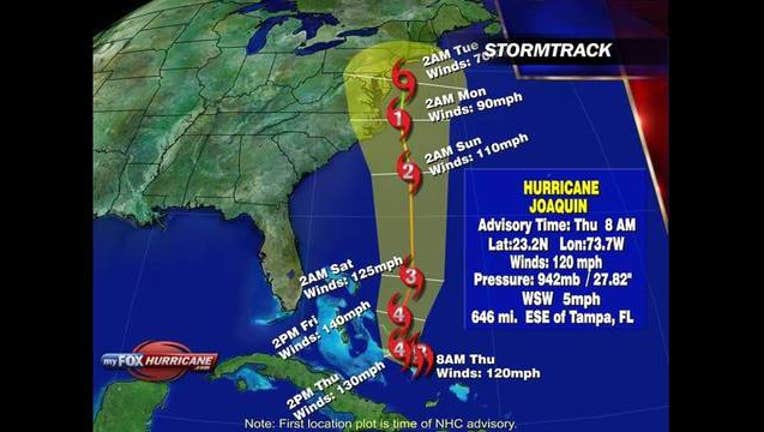 RALEIGH, N.C. (AP) — One person died Thursday as heavy flooding submerged cars and closed streets in South Carolina, and the drenching storms were expected to move up the East Coast, a region already walloped by rain.

Governors up and down the coast warned residents to prepare. The rains could cause power outages and close more roads. The approach of Hurricane Joaquin — a major Category 3 storm set to wallop the Bahamas and move toward the U.S. — could intensify the damage, but rain is forecast across the region regardless of the storm's path.

"Our state has seen the damage that extreme weather can cause time and time again - and I am urging New Yorkers to take precautions for more heavy storms in the coming days," Gov. Andrew Cuomo said Wednesday.

In Spartanburg, South Carolina, the heavy rains flooded and closed streets. Several cars were submerged in flash floods. One man was rescued Thursday morning after his vehicle was swept off the road where a culvert had washed out, Doug Bryson with Spartanburg County Emergency Management told local news outlets. The man managed to cling to a tree and was taken to a hospital for treatment, though there was no immediate word on his condition.

Meanwhile, Hurricane Joaquin was bearing down on the Bahamas, and forecasters said the storm is likely to strengthen as it makes its way toward the U.S.

But no matter which way Joaquin heads, an area of low pressure in the Southeast and a front stalled over the East Coast will pull moisture from the Atlantic Ocean, causing rain over the next few days, said Bruce Terry, lead forecaster for the government's Weather Prediction Center. The National Weather Service predicts as much as 10 inches for some areas.

"The bottom line is: We are expecting very heavy rains all the way from the Carolinas up into New England," he said.

The heaviest rain is expected in wide swaths of North Carolina and Virginia, along with parts of Maryland, Delaware and New Jersey, according to a National Weather Service forecast map.

Virginia Gov. Terry McAuliffe declared a state of emergency Wednesday afternoon, which allows emergency responders to begin to prepare for the storms.

He also issued tips to residents, including that "when roads are flooded, turn around and drive to a safe location.

"It may save your life."

Officials were closely watching the progress of the hurricane, though its path was far from certain. So far, there's been little consensus among computer-prediction models for the hurricane.

The National Hurricane Center in Miami sent a plane aloft Wednesday to gather data about Joaquin that will hopefully "get those models into better agreement," said Rick Knabb, the center's director.

"We're going to be throwing a lot more aircraft resources at this problem over the next few days," he said.

Storms in recent days have already caused misery in southwest Virginia. In Salem on Tuesday, 30 members of a water-rescue team removed 100 people from a low-lying apartment complex and trailer park.

To the west in Elliston, Shannon Sledd waited out the storm in the house she shares with her disabled parents and her two sons. Floodwaters up to 5 feet deep rose up to her front door, but didn't get inside.

"My mom and dad are really nervous," Sledd said. "We might have to get out."

In North Carolina, steady rains have already disrupted communities from the central part of the state to the coast.

Some roads were closed Wednesday in Guilford County, and emergency medical service Director Don Campbell said he feared that more rain expected through the weekend would topple trees and knock out power.

Along the coast, parts of North Topsail Beach eroded from rains and an unusually high tide over the weekend, so officials were watching the hurricane's approach.

"We haven't had time to recover from last weekend," said Carin Faulkner, the assistant town manager.

In New England, downpours Wednesday led to flooding. Western Massachusetts got up to 5 inches in just hours, according to the National Weather Service. Rainfall totals topped 6 inches in Maine and 5 inches in New Hampshire, leading to flash flood warnings. The University of Southern Maine canceled classes at its Portland, Gorham and Lewiston-Auburn campuses.

More than 6,000 power outages were reported in Maine.

College student Krystal Diaz said her commute by bus to downtown Providence, Rhode Island, from nearby Johnston had been especially long because of poor visibility and heavy traffic.

"Buses were going slow," Diaz said. "I was late for one of my classes."