A New Jersey teenager left a newborn baby with strangers who were eating at a restaurant in Jersey City.

JERSEY CITY, N.J. - Live-streamed video captured the aftermath when a teenage girl walked into a restaurant and left a newborn baby with strangers before running off.

On May 19, Alease Scott and her boyfriend, Walter Cocca, were eating inside of the El Patron restaurant in Jersey City’s south district when an unknown teenage girl carrying what appeared to be a newborn baby walked into the establishment and asked the employees for help.

Scott intervened after it seemed no one would be able to assist her and the teenage girl handed the baby to Scott before running out of the restaurant. 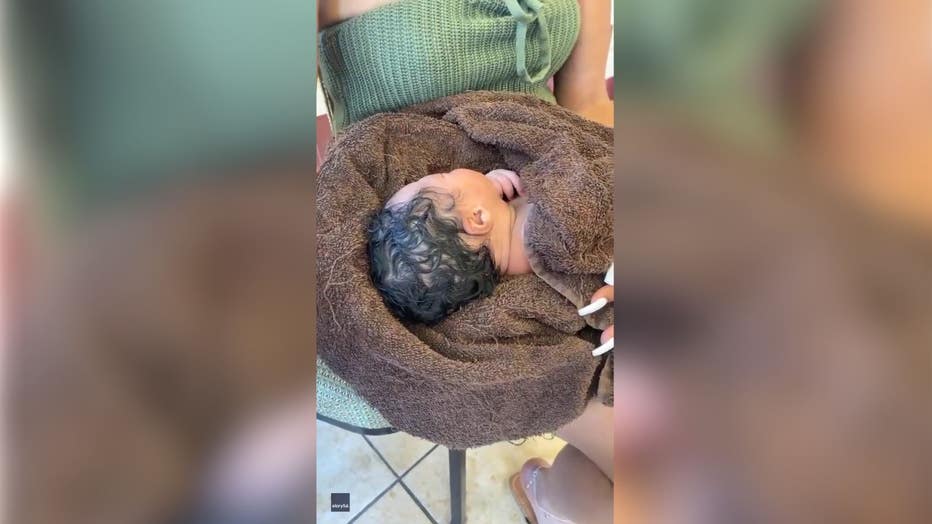 Video, which was live-streamed on Cocca’s Facebook, shows Scott sitting in a chair inside the restaurant holding the child.

"So, I’m at my neighborhood restaurant with my special friend and a lady comes in and hands her a baby," Cocca is heard saying in the video. "Apparently a newborn and runs out."

Scott is shown on video holding the baby in her arms, wrapped in a brown towel. She is also seen stroking the baby’s cheek as it appears to be sleeping soundly.

"The heartbeat is strong though," Scott is heard saying. "But the baby could use some oxygen."

Scott advised employees to call 911 and police arrived shortly after.

Officers were able to locate the teenage girl, who turned out to be the baby girl’s mother. Both the mother and baby were taken to the hospital for further treatment.

During a follow-up video posted to Facebook, Scott and Cocca went on to explain that they believed they were in that restaurant for a reason and fate allowed them to help the teenage mother and her child.

"All glory to God," Cocca said during the live stream. "This is not about us. This is about God putting people in a place to be of service."

"This is not about shaming that young lady," Cocca continued. "The baby was taken to the hospital. They have the mother in custody and the grandparents, the young lady’s parents, are aware of the baby being born."

RELATED: 7-year-old girl has emotional reaction when surprised with pug puppy for birthday

Both Scott and Cocca confirmed during their follow-up video that the baby is doing well.

The 14-year-old is not facing charges, according to the Jersey City public information officer. Local news media reported that the baby girl will be put up for adoption.

Storyful contributed to this video.