The 2022 midterm elections continue on Tuesday in several states, as well as Washington, D.C. Notable races include runoffs for a senate seat in Alabama and a secretary of state nomination in Georgia.

Mayor Muriel Bowser in the nation’s capital is facing voters amid crime rates and homelessness concerns, while primaries in Virginia will set up competitive congressional contests for the fall.

What to watch in Tuesday’s primaries:

Alabama’s Republican primary for U.S. Senate is going to a runoff between Katie Britt and U.S. Rep. Mo Brooks, who overcame losing former President Donald Trump’s endorsement to remain a contender for the GOP nomination.

The candidates are seeking the Alabama seat being vacated by 88-year-old Republican Sen. Richard Shelby, who announced his retirement in February 2021 after serving six terms.

Britt is Shelby’s former chief of staff and the former leader of the Business Council of Alabama, while Brooks is a six-term congressman from north Alabama.

Trump first backed Brooks in the spring of 2021, which stood for nearly a year until Trump rescinded it as the conservative politician declined in the polls. The former president took his time in issuing a second endorsement, later supporting Britt in the race only after she emerged as the top vote-getter in the state’s May 24 primary.

Britt captured nearly 45% of the ballots compared to Brooks’ 29%. Britt had needed to earn more than 50% of the vote to win outright and avoid a runoff.

Another top candidate, Mike Durant, best known as the helicopter pilot who was held captive in Somalia during the 1993 battle chronicled in the book and film "Black Hawk Down," finished in third place and failed to advance to the runoff.

Brooks has been backed by Texas Sen. Ted Cruz and Kentucky Sen. Rand Paul, both of whom campaigned with him.

The winner of the GOP race will face Democrat Will Boyd in November, though Democrats have found limited success in the deep-red state in the last 20 years. 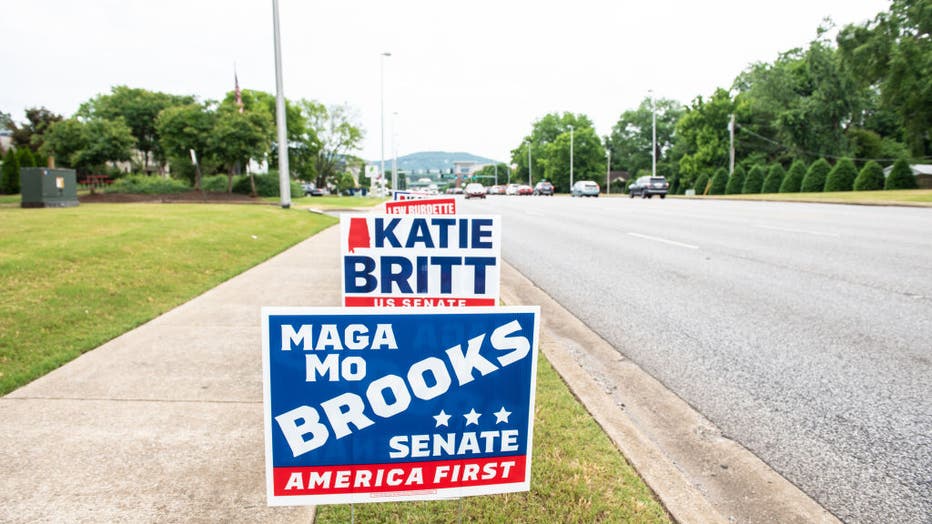 In Georiga, former state Rep. Dee Dawkins-Haigler is joining state Rep. Bee Nguyen in a runoff on Tuesday in the Democratic primary for Georgia secretary of state.

Nguyen won about 44% of the primary vote, short of the majority she needed to win outright. Dawkins-Haigler won nearly 19%, enough to advance to the June 21 runoff. 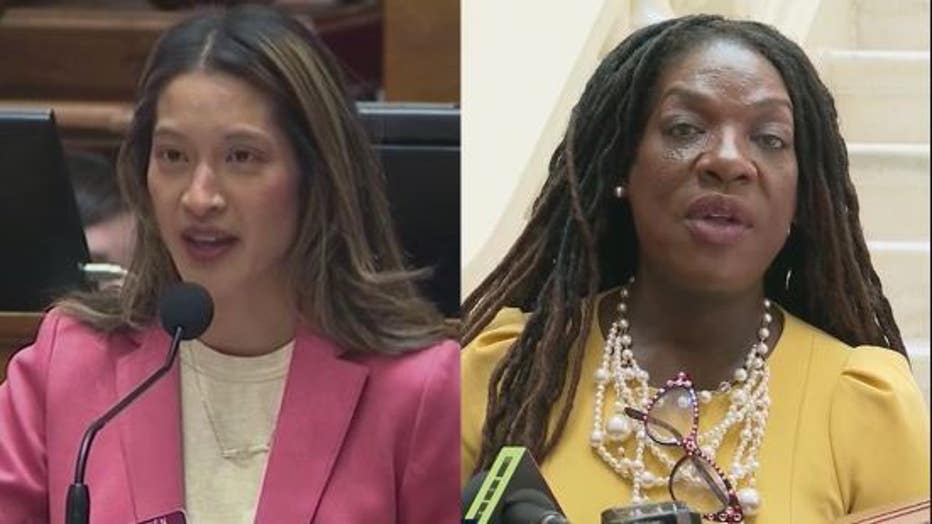 The winner will face Republican incumbent Secretary of State Brad Raffensperger and libertarian Ted Metz in the November general election.

Raffensperger beat back a challenge in his May 24 primary from U.S. Rep. Jody Hice, who was endorsed by Trump. Trump made Raffensperger a top target for rebuffing his efforts to "find" enough votes to overturn Joe Biden’s win in the state’s 2020 presidential election.

In congressional runoffs, Vernon Jones, a Trump-backed candidate and former Democrat, is competing against trucking company owner Mike Collins for the Republican nomination for the 10th Congressional District seat east of Atlanta. Collins was endorsed by Republican Gov. Brian Kemp, who also won his primary over a Trump-backed challenger.

In the 6th District in Atlanta’s northern suburbs, emergency room physician Rich McCormick is trying to hold off Trump-backed lawyer Jake Evans. That race has revolved around accusations by each candidate that the other is insufficiently conservative.

The Republican winners in the 6th and 10th are heavy favorites in the November election over their Democratic opponents.

In Virginia, voters will be picking Republican nominees to take on Democratic U.S. House incumbents in two of the most highly competitive districts in the country.

In the coastal 2nd District, which includes the state’s most populous city, Virginia Beach, four military veterans are competing for the GOP nomination. With a big fundraising lead and the backing of the Congressional Leadership Fund, a super PAC dedicated to electing House Republicans, state Sen. Jen Kiggans is widely seen as the front-runner. The winner will face Democrat Elaine Luria, a retired Naval commander and member of the Jan. 6 committee, in the general election. 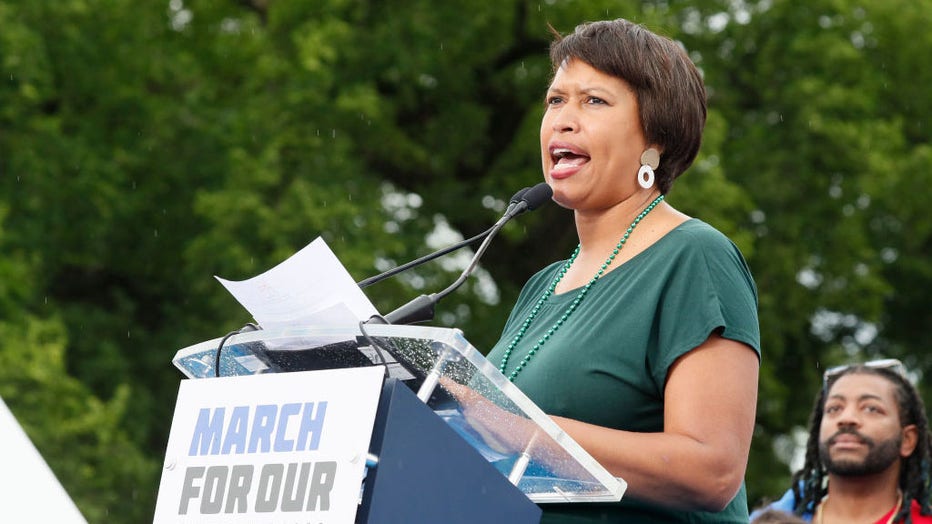 D.C. Mayor Muriel Bowser speaks during March for Our Lives 2022 on June 11, 2022, in Washington, DC. (Photo by Paul Morigi/Getty Images for March For Our Lives)

Bowser, the two-term mayor of Washington, D.C., is trying to fend off challenges from a pair of Council members as the district contends with rising crime rates and homelessness concerns.

Bowser has had a tumultuous second term that saw her repeatedly face off against Trump and walk a public tightrope between her own police department and a vocal coalition of activists led by Black Lives Matter. She is campaigning on the need for proven leadership and her history as one of the faces of Washington’s ongoing quest for statehood.

Her primary challengers are Robert White and Trayon White, who are not related to each other. Both accuse Bowser of favoring developers as spiraling costs of living drive Black families out of the city and of mishandling public safety issues amid rising rates of violent crime, like a Sunday night shooting that left a 15-year-old boy dead and a police officer and at least two other adults wounded.

Robert White has a history of successful insurgent campaigns, having unseated an entrenched incumbent for an at-large Council seat in 2016.

Trayon White openly invokes the spirit of late D.C. Mayor Marion Barry, who remains a controversial but beloved figure among many Washingtonians. White was criticized in 2018 for claiming the Rothschilds, a Jewish banking dynasty and frequent subject of antisemitic conspiracy, were controlling Washington’s weather conditions.

He later said he didn’t realize his comment could be construed as antisemitic.

While there are no statewide or congressional races on the Arkansas ballot during Tuesday’s runoff, several Republican primaries for the state Legislature are taking place.

Some of the races feature incumbent lawmakers fending off challenges for the GOP nomination.

The most heated race is a Republican primary in north Arkansas that pits two of the most outspoken conservatives who have served in the Legislature. Republican Sen. Bob Ballinger faces former Sen. Bryan King in the primary runoff. Ballinger defeated King in a 2018 Republican primary for state Senate.

Republicans hold a majority of both chambers of the state Legislature.