A rare Republican who supports abortion rights found success in Colorado in the first primary elections held since the Supreme Court overturned Roe v. Wade, while New York's first female governor positioned herself to become a major voice in the post-Roe landscape.

In Illinois, Democrats helped boost a Republican gubernatorial candidate loyal to former President Donald Trump in the hopes that he would be the easier candidate to beat in November. And in at least two states, election deniers were defeated, even as pro-Trump lightning rods elsewhere won.

Takeaways from the latest round of primary elections:

Abortion is on the ballot 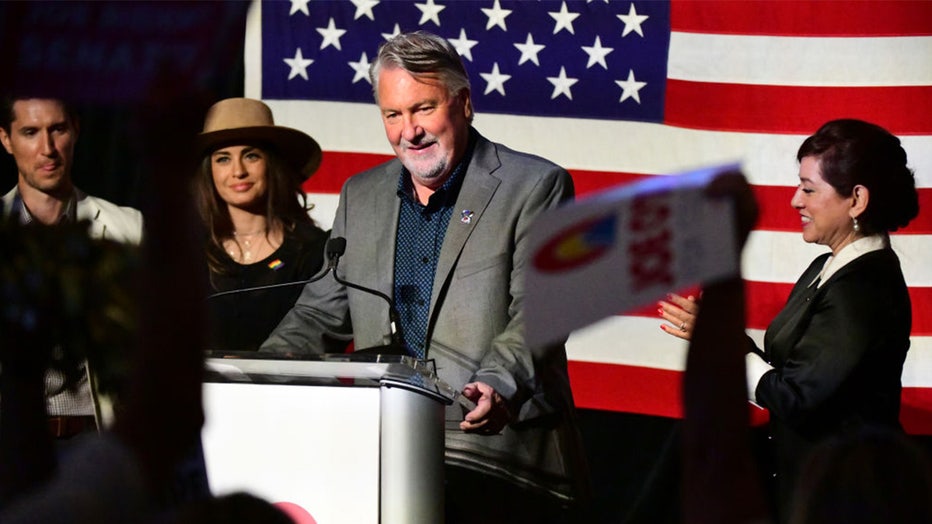 The abortion debate consumed the nation this week, but there was no race where it mattered more than Colorado’s Republican primary for the U.S. Senate, where businessman Joe O'Dea became one of the only abortion-rights-supporting Republicans in the nation to win a statewide primary this year.

O'Dea beat back a stiff challenge from state Rep. Ron Hanks, a Trump loyalist who opposed abortion with no exceptions for rape, incest or the life of the mother.

O'Dea will face Democratic Sen. Michael Bennet in November, and if he wins, he would become just the third Senate Republican — and the only male — to support abortion rights.

He said he backs a ban on late-term abortions and government funding of abortions but that the decision to terminate a pregnancy in the initial months is "between a person and their God."

Democrats had spent at least $2.5 million on ads designed to boost O'Dea's opponent by promoting, among other things, that he was "too conservative" for backing a complete abortion ban.

Democrats hoped that the Roe decision would give them an advantage in several swing states, including Colorado. But, at least for now, O'Dea's victory would seem to complicate the Democrats' plans.

A win for Trump or the Democrats? 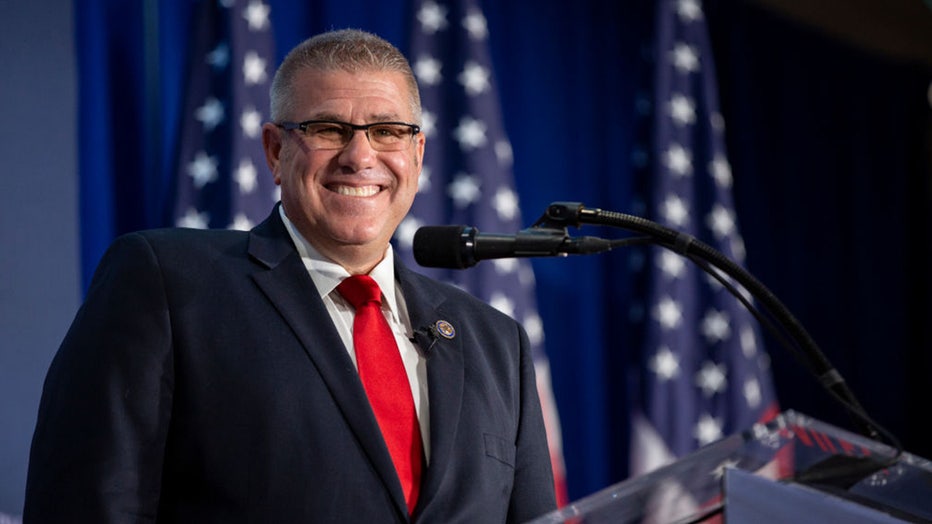 In the final weeks of a campaign, Trump once again attached himself to a Republican who was leading the race. This time, it was farmer Darren Bailey in Illinois, who easily cruised to the GOP nomination in the governor's race.

But while Trump can add Bailey to his endorsement record, Democrats are betting that his victory may be short-lived.

Bailey now goes on to face Democratic Gov. J.B. Pritzker in the November general election, which is just what Pritzker and his allies wanted. Pritzker, the billionaire heir to the Hyatt hotel fortune, and the Democratic Governors Association spent heavily on advertising to help Bailey win the GOP nomination. Among other things, the ads reminded the state's Democratic-leaning electorate that he is "100% pro-life."

It's a risky gamble. While Bailey may look like an easier opponent in the general election, it's feasible that he could ride a red wave — if it materializes — to the Illinois governor's mansion. Pritzker's predecessor in office was a Republican.

Bailey showed off political acumen by besting the early Republican front-runner Richard Irvin, the mayor of Illinois' second-largest city, Aurora. Irvin lost despite being the beneficiary of a staggering $50 million investment from billionaire Ken Griffin. Irvin, who is Black, refused to say whether he voted for Trump and largely avoided talking about abortion, delivering the kind of moderate message that could have cut across ideological lines in a general election.

Instead, Republicans nominated Bailey, a Trump loyalist who reads from Bible verses in campaign videos and proudly touts his anti-abortion policies in a state Trump lost by 17 percentage points in 2020. 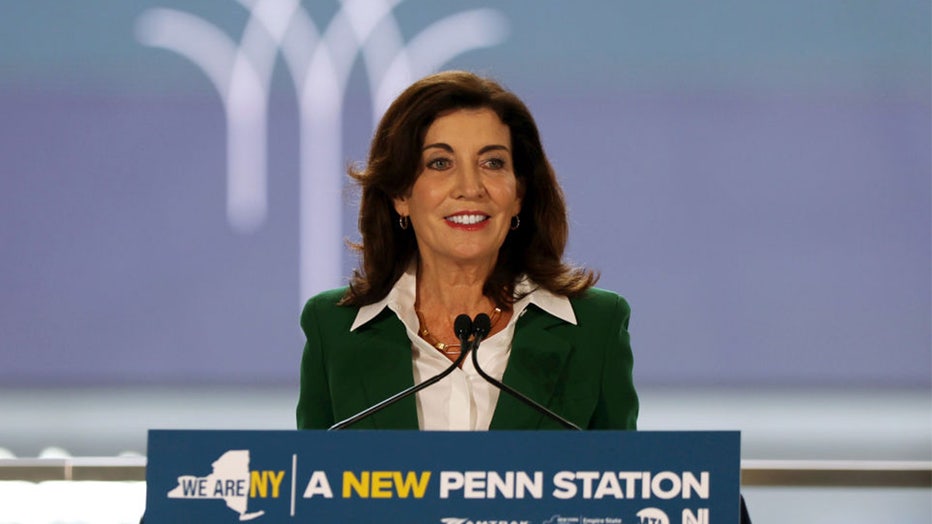 The scandals of the men around her did not derail New York Democratic Gov. Kathy Hochul, who overcame primary challengers on the right and left to win her first election test as the state's chief executive.

Now, Hochul, New York's first female governor, is positioned to emerge as a leading voice in the Democratic Party as it navigates the post-Roe landscape.

The low-profile Hochul stepped into one of the nation's most prominent governorships last fall after Andrew Cuomo resigned in the midst of a sexual harassment scandal. She had promised to restore New Yorkers' faith in their government, only for her handpicked lieutenant governor to be arrested this spring in a federal corruption probe.

Hochul was either "consistently shamefully out of the loop, or shamefully enabling through her inaction," charged one of her primary challengers, New York City’s elected public advocate, Jumaane Williams.

The attack ultimately didn't land in the primary. But don't expect such criticism to disappear as the race for New York governor enters its next phase.

Rep. Lee Zeldin emerged from a crowded Republican field to earn the GOP nomination for governor. He defeated Andrew Giuliani, the son of New York City’s former mayor Rudy Giuliani, among others.

And while Hochul has a serious reelection test ahead, look for her to step into the national spotlight as the abortion debate rages.

The Democratic governor said in recent days that New York would be a "safe harbor" for those seeking abortions.

They celebrated their allegiance to Trump's baseless conspiracy theories on the campaign trail. But on Tuesday night, a handful of these so-called election deniers had nothing to cheer about.

In Colorado, Republican voters did not reward secretary of state candidate Tina Peters for championing Trump's lies about election fraud. She was bested by Pam Anderson, a former county clerk who previously led the state clerks’ association and defends the state's mail-in elections system.

Some officials in both parties worried that Peters would win the primary. That's even after Peters, the Mesa County clerk, was indicted for a security breach spurred by conspiracy theories related to the 2020 presidential election. The state GOP had called on her to suspend her campaign.

Elsewhere in Colorado, Senate candidate Hanks had also promoted lies about the last presidential election. In addition to being an outspoken opponent of abortion rights, he had attended the "Stop the Steal" rally that preceded the attack on the U.S. Capitol on Jan. 6, 2021.

And in Mississippi, Trump loyalist Michael Cassidy lost a runoff election to incumbent Rep. Michael Guest, who had voted to create an independent commission to investigate the Jan. 6 attack. Cassidy said in campaign speeches that Guest had done nothing to stop "the persecution of Jan. 6 political prisoners."

Two Republicans familiar with controversy tested for the first time whether Republican voters deemed them too extreme to go back to Congress. They both prevailed.

First-term Rep. Mary Miller, who campaigned alongside Trump over the weekend, defeated five-term Rep. Rodney Davis, who was considered more moderate. The primary victory all but ensures Miller will return to Congress for another term given the heavy Republican advantage in her 15th Congressional District, which is the most Republican district in the state.

Miller won just days after describing the Supreme Court’s reversal of Roe v. Wade as "a victory for white life." A spokesperson later said she had intended to say the decision was a victory for a "right to life."

Miller is no stranger to provocative statements. Soon after joining the House, Miller quoted Adolf Hitler, saying he was right to say that "whoever has the youth has the future."

And in Colorado, Trump loyalist Lauren Boebert defeated a moderate state representative who had run a primary campaign focused on Boebert’s extremism. It didn’t work.

Boebert’s controversial moves are many. She vowed to carry a handgun on the House floor. She faced calls for her censure last year after being caught on video making Islamophobic comments about Minnesota Rep. Ilhan Omar. And she heckled President Joe Biden in his first State of the Union address.

But after winning her primary, she is almost certain to return to Congress for another two years. Her GOP-leaning 3rd Congressional District in western Colorado became even more Republican after redistricting.

A Roe shift in Nebraska?

Nebraska’s low-profile special election to fill the remainder of former Rep. Jeff Fortenberry’s term was not supposed to be close. Republicans have held the district for nearly 60 years.

The specific cause of the margin wasn’t immediately unclear, although there was evidence of higher turnout in one Democratic-leaning county that could be related to the Roe decision.

Heading into election day, Flood appeared to have a strong edge in the district, which includes Lincoln, parts of suburban Omaha and dozens of smaller, more conservative towns. The district has nearly 68,000 more Republicans than Democrats and hasn’t elected a Democrat to the House since 1964.

What happened? Lancaster County, home to the state capital and the University of Nebraska, offers some clues.

In the end, the swing wasn’t enough to move a heavily-Republican district, but Democrats could look to the results for hope that the Roe decision will be a significant motivator for the Democratic base.

Incidentally, Fortenberry was sentenced to two years of probation on Tuesday for lying to the FBI. Flood and Pansing Brooks are expected to face off again in the November general election.