The first bull run in three years was held in the city of Pamplona, Spain, with the post-pandemic return of the San Fermin festival, on July 7, 2022. Credit: Fabien Jans/Sudouest.fr via Storyful

It was the first run with gorings in the festival so far this year. There are three more daily runs before the festival ends Thursday.

The regional government said a 25-year-old runner from Sunrise, Florida, was gored in the calf in the bullring. The other two gored were Spaniards, one in the ring and one on the street. None was in serious condition. 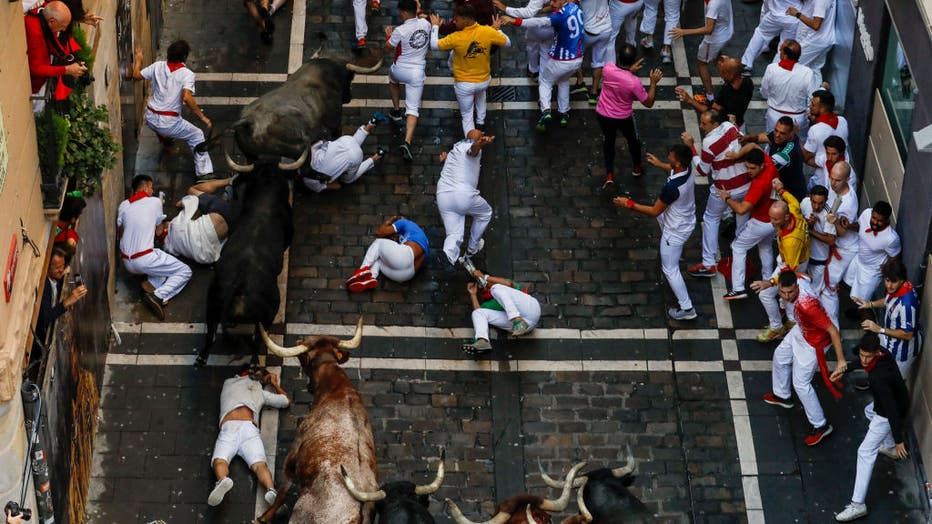 Revellers fall to the ground as they run with Jose Escolar Gil's fighting bulls along Calle Estafeta during the forth day of the San Fermin Running of the Bulls festival on July 09, 2022 in Pamplona, Spain. The iconic Spanish festival has resumed in

Earlier festival organizers had said erroneously that the foreigner gored in the ring was Australian.

Three other runners, all Spaniards, were treated for injuries sustained in falls during the run.

Television images showed one bull repeatedly tossing and butting one runner against the wooden barriers on the edge of the ring and then goring another in the back of the leg.

The spectacle lasted just over three minutes as hundreds of runners, mostly men, ran frantically ahead and alongside six fighting bulls as they charged through the cobblestone streets of this northern city. The run finishes at Pamplona’s bullring, where later in the day the bulls are killed by professional bullfighters. 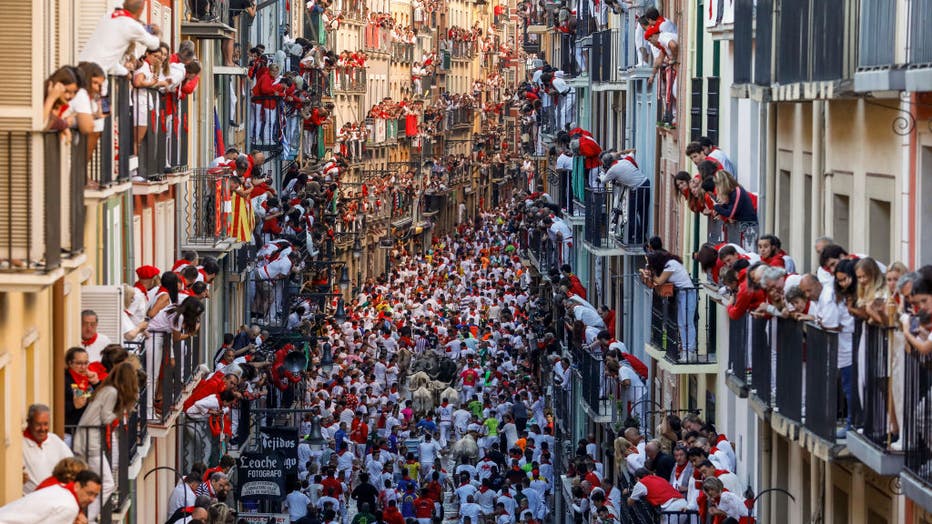 Revellers run with Jose Escolar Gil's fighting bulls along Calle Estafeta during the forth day of the San Fermin Running of the Bulls festival on July 09, 2022 in Pamplona, Spain. The iconic Spanish festival has resumed in earnest this year after bei

Tens of thousands of visitors come to the Pamplona festival, which was featured in Ernest Hemingway’s 1926 novel "The Sun Also Rises." The adrenaline rush of the morning bull run is followed by partying throughout the day and night.

Eight people were gored in 2019, the last festival before a two-year hiatus because of the COVID-19 pandemic. Sixteen people have died in Pamplona’s bull runs since 1910, with the last death in 2009.