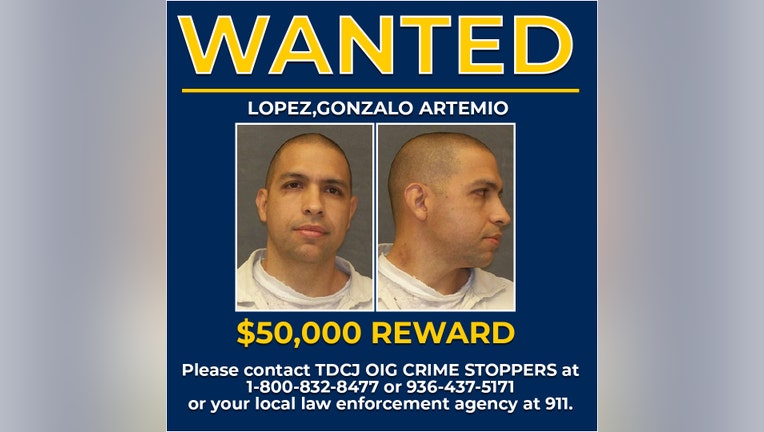 LEON COUNTY, Texas - A manhunt is underway for an inmate who escaped custody in Leon County, Texas by stabbing a corrections officer while being transported.

Gonzalo Lopez, 46, was being transported on a bus with 15 other inmates from Gatesville, headed eastbound on Highway 7 to Huntsville Thursday afternoon. During the ride, Lopez was able to get out of his restraints and allegedly stabbed the officer driving the bus in the hand with an unknown object.

FOX 26 is told the officer struggled with Lopez to keep him from getting his gun.

The bus then crashed into a ditch before Lopez ran off. Another officer on the bus fired some shots at him, but it's unknown if Lopez was hit.

The other inmates remained on the bus and were not injured.

The Leon County Sheriff's Office says several agencies are working together to find Lopez, who was reportedly wearing an all-white TDCJ uniform. He was last seen heading across a cow pasture west of Centerville.

During the search Thursday, a perimeter was set up around Highway 7 in Leon County, but an active search remains underway to find the prisoner.

Download the FOX 26 news app for the latest alerts on this and other breaking news stories.

Authorities are asking the public to avoid the area of Centerville west to Markay to Buffalo as they work to locate Lopez.

SkyFOX was hovering above Highway 7 in Leon County, where a perimeter was set up to find escaped inmate, Gonzalo Lopez, who is serving a life sentence for capital murder but assaulted and stabbed a Texas Department of Criminal Justice corrections officer while being transported.

If he is spotted, authorities say immediately call 911 and do not approach him as he is considered dangerous.

A reward is being offered for information that leads to the capture of escaped Texas inmate Gonzalo Lopez in Leon County.

"I would highly encourage anybody in the public to lock their vehicles locked their doors. We do not know if he has obtained any kind of weapon," said Robert Hurst with TDCJ. "Last we saw him, he did not appear to have a weapon in his possession. But who knows what he might have been able to get between the time that he escaped and now."

"He is a dangerous person," said Robert Hurst, a spokesperson from Texas Department of Criminal Justice. "We have every reason to believe that he’s still back here in Leon County somewhere off highway 7, but who knows."

Authorities set up checkpoints Friday in Centerville to look for Lopez. Police could be seen looking inside cars and trucks for the wanted fugitive.

"We’re locked and loaded," said Kristen Nunley.  "I mean seriously.  That’s who we are. We protect our neighbors. We’re good."

Authorities are using helicopters, horses, and dogs for the massive manhunt. Several agencies are involved looking for Lopez.

"The public doesn’t need to be dealing with this guy," said Hurst. "Let us deal with him."