Advocates from both sides speak out about Georgia's anti-abortion law

Georgia restrictive new abortion law is now in effect after a federal court ruling. It comes weeks after the US Supreme Court's controversial decision to overturn Roe v. Wade.

ATLANTA - A U.S. appeals court in Georgia ruled in favor of state officials, saying the Supreme Court's recent decision on abortions paved the way for Georgia's so-called "Heartbeat Bill," which restricts the procedure.

The U.S. Court of Appeals for the 11th Circuit provided the opinion on Wednesday. The Supreme Court's ruling in Dobbs v. Jackson Women’s Health Org., "makes clear that no right to abortion exists under the Constitution, so Georgia may prohibit them."

The 2019 Georgia law bans most abortions when there is a "detectable human heartbeat." Cells that eventually become the heart exhibit cardiac activity in a human embryo as early as six weeks into pregnancy. That is earlier than some women realize they are pregnant. 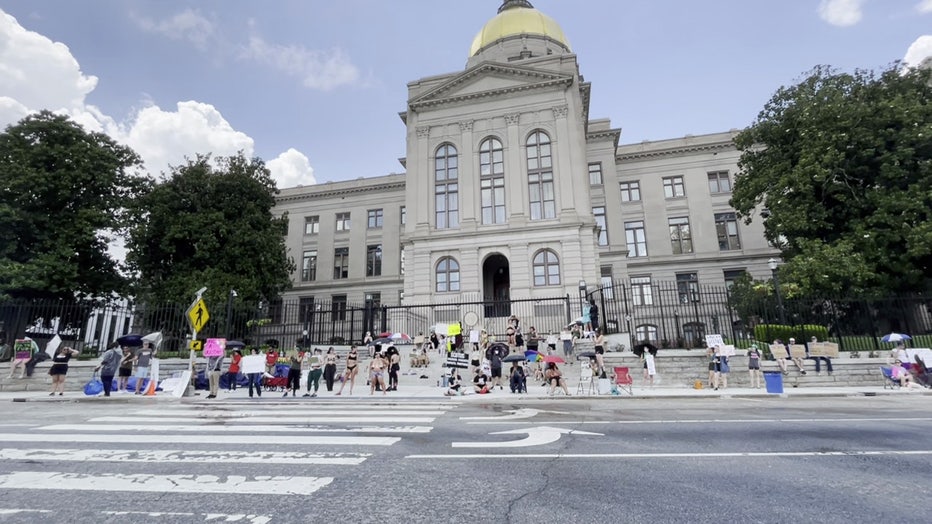 Two groups of protestors in favor of the right to abortion are occupying areas outside state buildings on July 4 in Downtown Atlanta, calling on Attorney General Chris Carr to stop courts from implementing Georgia's abortion restriction.

The law provides exceptions for rape and incest and when the mother’s life is at risk or a serious medical condition renders a fetus unviable.

The law was blocked while SCOTUS ruled on the Mississippi law. That ruling in June effectively rescinded the prescient set by Roe. v. Wade.

Georgia's new restrictive anti-abortion law gives unborn children the same rights as a person. The ramifications that could ripple through all levels of government and could take years to fully define.

Previously, women in Georgia could seek an abortion during the first 20 weeks of pregnancy, but House Bill 481 allows women to get abortions before a heartbeat is detected, which is at about six weeks gestation. That is before most women see a doctor to confirm they're pregnant.

HB 481 makes exceptions in the case of rape and incest — if the woman files a police report first — and to save the life of the mother. It also allows for abortions when a fetus is determined not to be viable because of serious medical issues.

The bill also deals with alimony, child support, and even income-tax deductions for fetuses, declaring that "the full value of a child begins at the point when a detectable human heartbeat exists."