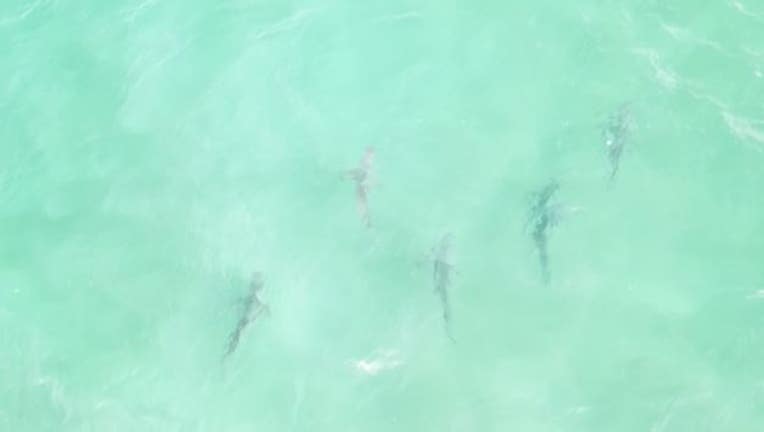 Photographer Duncan Weir recorded the feeding frenzy on Monday from above, where clear waters offered a prime view of the lunchtime feeding frenzy. According to Weir, the school of bunker fish was about 200 yards from the Atlantique Beach shore in Islip, New York.

Experts with OCEARCH say these bait fish near the coast could be tied to the recent string of shark attacks and sightings on New York and New Jersey beaches this summer. At least five shark attacks have been reported on Long Island alone this summer.

"The real increase in shark sightings is because of the return of the bunker," OCEARCH expedition Chris Fischer said.

Bunker, or menhaden, are bait fish and swim in large schools close to the water's surface during the spring, summer and fall, according to the National Oceanic and Atmospheric Administration.

COULD THIS BE THE REASON FOR THE RECENT SHARK SIGHTINGS?

This behavior can be seen in the video captured by Weir, showing the sharks darting into the school and their tails splashing as they go in for the fatal bite.

Another drone operator recently recorded two great white sharks teaming up off the coast of Long Island to target a large school of fish.

GET UPDATES ON THIS STORY AT FOXWEATHER.COM