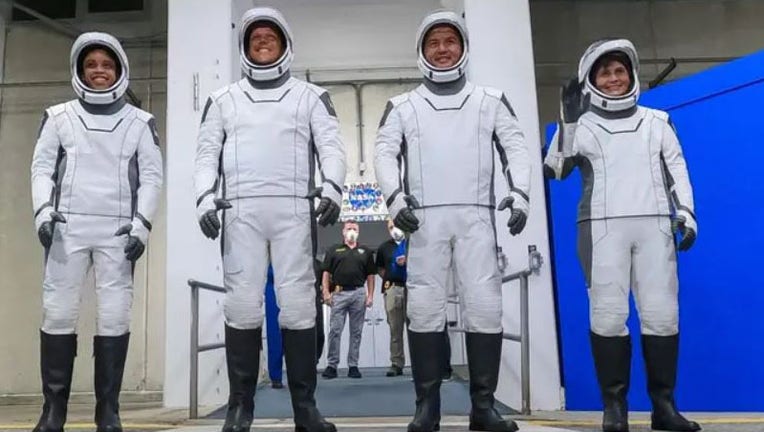 An American and European astronaut crew is closer to launching from Florida's coast after four private space explorers returned to Earth from International Space Station on Monday, clearing the way for another astronaut mission to launch.

The Crew-4 astronauts – three American and one Italian – arrived at Kennedy Space Center in Florida on April 18 and spent extra time with their families enjoying the Cape Canaveral beaches while they awaited their liftoff.

A series of delays with the Axiom-1, the first all-private mission to the space station, due to poor weather conditions for a spacecraft landing in the Atlantic Ocean caused a rippled effect delaying the Crew-4 launch and the Crew-3 return.

The Axiom-1 mission successfully ended Monday afternoon when the private crew splashed down off the coast of Jacksonville. Axiom Space initially booked the paying customers on a 10-day spaceflight, but their trip was almost 16 days in orbit because of the weather delays.

Now, NASA and SpaceX are targeting Wednesday at 3:52 a.m. ET to launch the four astronauts in the new Dragon Freedom capsule atop a Falcon 9 rocket.

The forecast overnight Wednesday should support an on-time liftoff for the Crew-4 mission. Launch weather officers with the Space Force's 45th Weather Squadron predict a 90% chance of favorable weather for launch.

"Just tracking the potential for a few clouds … any time we get some clouds, especially off the water, we can see a sprinkle or two. That's something we'll be looking at as well," Moses said. "But overall, still looking pretty low, weather is looking good." 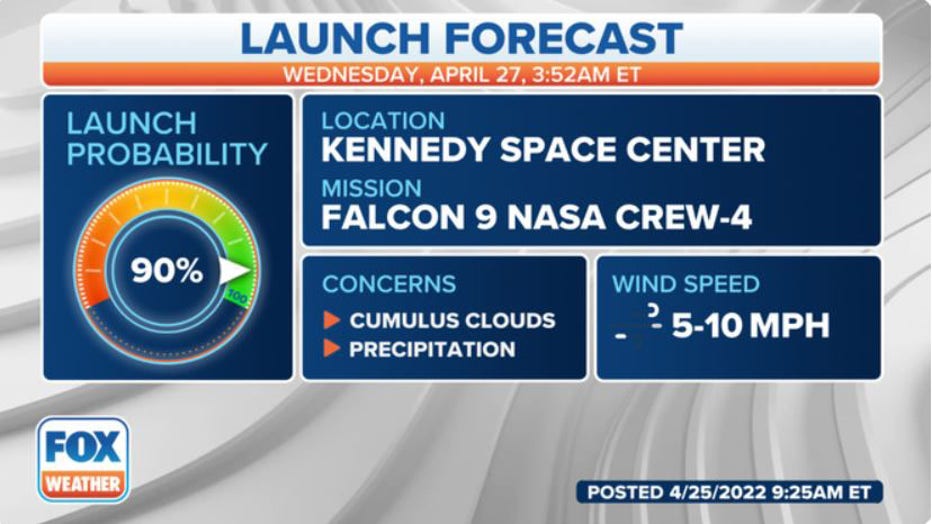 A typical pattern of Florida sea breezes will create some isolated showers Tuesday evening. However, those should dissipate before the 3:52 a.m. launch.

The primary weather concerns will be possible cumulus clouds and rain around the launch site.

If the launch is delayed, Moses said a weather system moving in late Wednesday should clear out quickly for a good launch opportunity Friday morning.

NASA and SpaceX are watching a cold front moving across the Southeast for weather along the launch ascent path in case of a launch abort.

NASA astronauts Kjell Lindgren, Jessica Watkins and Bob Hines and European Space Agency astronaut Samantha Cristoforetti will be launching on a new SpaceX Dragon spacecraft. It's tradition for the first astronauts to fly in a new spaceship, to name it. The Crew-4 astronauts have dubbed the new vehicle Freedom.

Hines, the mission pilot, said flying in a new vehicle is very rare because of the reusability of SpaceX's rockets and spacecraft.

"We have gotten to watch this vehicle from its infancy all the way to, as I say, a somewhat mature baby Dragon now," Hines said on April 18.

The mission will be the first spaceflight for Hines and Watkins.

Cristoforetti will mark the third consecutive European astronaut to fly to the ISS in a year and a half.

"It's the first time that we have such a long, continuous operation and placements on the space station," ESA Director General Josef Aschbacher said. "It's also showing that in Europe, we are really gearing up on the human exploration, and we have quite some ambitious plans to become an even stronger partner to NASA."

After Dragon Freedom docks at the International Space Station, the Crew-4 astronauts will spend about five days in orbit with the Crew-3 astronauts before that group returns to Earth, capping off a six-month mission.

Crew-4 is the fourth long-duration mission under NASA's Commercial Crew Program in partnership with SpaceX and will be the fifth government astronaut launch for SpaceX overall. Elon Musk's company has also completed two private spaceflights with Dragon, the Inspiration 4 mission last September and Axiom-1.

Get the latest updates on this story at FOX Weather.com.