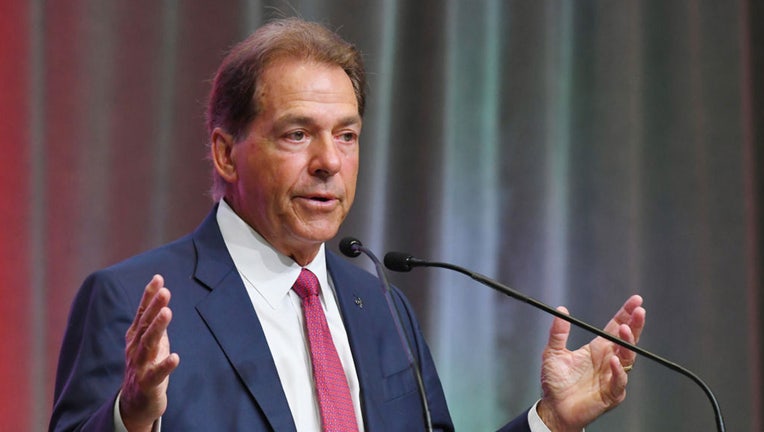 TUSCALOOSA, Ala. - Alabama coach Nick Saban is getting a new eight-year contract worth at least $93.6 million, eclipsing the recent megadeal of Southeastern Conference rival Kirby Smart.

The University of Alabama trustees compensation committee on Tuesday approved a one-year extension through Feb. 28, 2030, for the 70-year-old Saban, who has led the Crimson Tide to six national titles. Saban's deal averages out to $11.7 million per year, topping Smart's $11.25 million pay at defending national champion Georgia.

The announcement comes a month after Smart agreed to a 10-year deal worth more than $110 million. The Bulldogs beat Alabama in the national championship game in January.

Saban's deal includes a salary and talent fee of $9.9 million this year with $400,000 annual raises. Saban can receive an $800,000 completion bonus at the end of February in each of the next four years, plus other bonuses.

"(Wife) Terry and I are very appreciative of the unmatched commitment the university has shown to this football program and our family over the last 15-plus years," Saban said in a statement. "This is our home, and we look forward to finishing our career at Alabama."

His contract ensures his pay will remain at or near the top of the heap among college football coaches.

Saban would get a boost if his deal is less than the average total pay of the three highest paid Southeastern Conference coaches or the average of what the five paid coaches in college football are making. He’d receive the higher of the two averages.

Saban agreed to a three-year extension in June 2021 for $84.8 million over eight years.

Alabama athletic director Greg Byrne is receiving a three-year extension through June 30, 2029 with a 5 percent raise. He'll make $1.49 million this year with raises pushing his salary to $1.91 million for 2028-29.

Byrne also secured a coach seeking his eighth national title — including one at LSU.

"We are incredibly fortunate to have the best football coach in the nation and one of the greatest coaches of all time, regardless of sport, here at Alabama in coach Saban," Byrne said. "Not only have his teams been successful on the field, but they have also achieved greatly in the classroom and community.

"Beyond that, the impact he and Ms. Terry have had on The University, Tuscaloosa and the state of Alabama cannot be overlooked."

The financial terms of the contracts become official upon the formal approval by the University of Alabama System Board of Trustees.