Alex Jones took the stand on day seven of his defamation trial. For years, far-right conspiracy theorist Alex Jones ranted to his millions of followers that the 2012 Sandy Hook Elementary School shooting was a hoax, that children weren’t killed and that parents were crisis actors in an elaborate ruse to force gun control. Under oath and facing a jury that could hit him with $150 million or more in damages for his false claims, Jones said he now realizes that was irresponsible and believes that what happened in the deadliest school shooting in American history was "100% real." "Especially since I've met the parents. It's 100% real," Jones said at his trial.

HARTFORD, Conn. - A month after losing one nearly $50 million verdict, conspiracy theorist Alex Jones is set to go on trial a second time for calling the Sandy Hook Elementary School shooting a hoax and causing several of the victims' families emotional and psychological harm.

A six-member jury with several alternates in Connecticut will begin hearing evidence Tuesday on how much Jones should pay the families since he already has been found liable for damages to them. The trial is expected to last about four weeks.

Last month, a Texas jury ordered Jones to pay $49.3 million to the parents of 6-year-old Jesse Lewis, one of 26 students and teachers killed in the 2012 shooting in Newtown, Connecticut. Jones' lawyer has said an appeal is planned.

The Connecticut case has the potential for a larger award because it involves three lawsuits — which have been consolidated — that were filed by 15 plaintiffs, including the relatives of nine of the victims and a former FBI agent who responded to the school shooting.

Jones, who runs his web show and Infowars brand in Austin, Texas, also faces a third trial over the hoax conspiracy in another pending lawsuit by Sandy Hook parents in Texas.

Here is a look at the upcoming trial in Waterbury, Connecticut, about 18 miles (29 kilometers) northeast of Newtown. Infowars' parent company, Free Speech Systems, which has filed for bankruptcy protection, is also a defendant.

Why are the Sandy Hook families suing Alex Jones?

The families and former FBI agent William Aldenberg say they have been confronted and harassed in person by Jones' followers because of the hoax conspiracy. They also say they have endured death threats and been subjected to abusive comments on social media.

Some of the plaintiffs say strangers have videotaped them and their surviving children. And some families have moved out of Newtown to avoid threats and harassment.

"I can’t even describe the last nine and a half years, the living hell that I and others have had to endure because of the recklessness and negligence of Alex Jones," Neil Heslin, Jesse Lewis' father, testified during the Texas trial.

The Connecticut lawsuit alleges defamation, intentional infliction of emotional distress and violations of the state Unfair Trade Practices Act. The families claim when Jones talked about Sandy Hook, he boosted his audience and raked in more profits from selling supplements, clothing and other items.

The families have not asked for any specific amount of damages, some of which may be limited by state laws. There are no damage limits, however, under the Unfair Trade Practices Act.

In all the Connecticut and Texas cases, Jones and his lawyers repeatedly failed to turn over records as required to the families' attorneys. In response, judges handed down one of the harshest sanctions in the civil legal world — they found Jones liable for damages by default without trials. 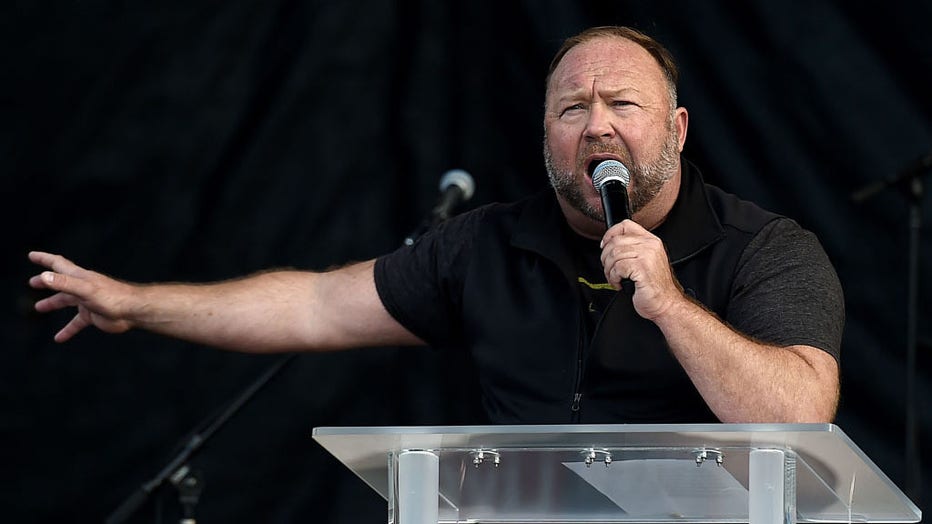 FILE - US far-right radio show Alex Jones speaks to supporters of US President Donald Trump as they demonstrate in Washington, DC, on Dec. 12, 2020, to protest the 2020 election. (Photo by OLIVIER DOULIERY/AFP via Getty Images)

What does Alex Jones say?

In a reversal from what he said on his show for years following the shooting, Jones now says he believes the massacre was real. But he continues to say his comments about the shooting being a hoax involving crisis actors to encourage gun control efforts were protected by free speech rights.

During a deposition in the case in April, a defiant Jones insisted he wasn't responsible for the suffering that Sandy Hook parents say they have endured because of his words.

He also has said the judges' default rulings against him — finding him liable without trials — were unfair and suggested they were part of a conspiracy to put him out of business and silence him.

"If questioning public events and free speech is banned because it might hurt somebody’s feelings, we are not in America anymore," he said at the deposition. "They can change the channel. They can come out and say I’m wrong. They have free speech."

At the Texas trial, however, Jones testified that he now realizes what he said was irresponsible, did hurt people's feelings and he apologized.

What is expected at the trial?

Judge Barbara Bellis, who found Jones liable for damages, will oversee the trial. She is the same judge who oversaw Sandy Hook families' lawsuit against gun maker Remington, which made the Bushmaster rifle used in the school shooting. In February, Remington agreed to settle the lawsuit for $73 million.

The trial is expected to be similar to the one in Texas, with victims' relatives testifying about the pain and anguish the hoax conspiracy caused them and medical professionals answering questions about the relatives' mental health and diagnoses.

Jones also will be testifying, said his lawyer, Norman Pattis.

"He is looking forward to putting this trial behind him; it has been a long and costly distraction," Pattis wrote in an email to The Associated Press.

Evidence about Jones' finances is also expected to be presented to the jury.

Jones testified at the Texas trial that any award over $2 million would "sink us," and he urged his web show viewers to buy his merchandise to help keep him on air and fight the lawsuits.

But an economist testified that Jones and his company were worth up to $270 million. Jones faces another lawsuit in Texas over accusations that he hid millions of dollars in assets after families of Sandy Hook victims began taking him to court.