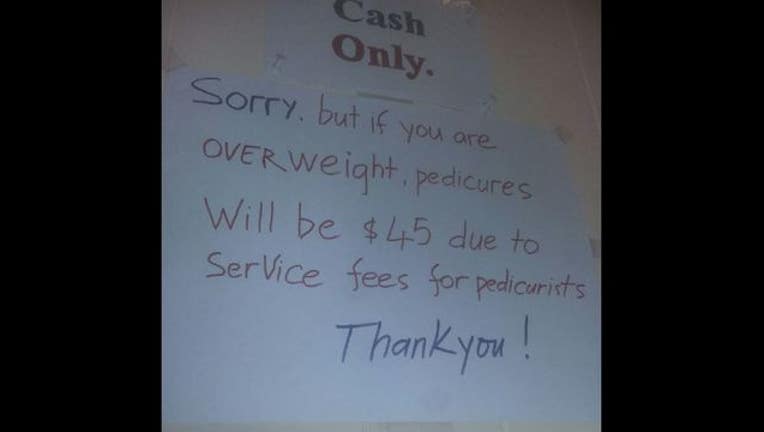 MEMPHIS, Tenn. (KTVU) - Deshania Ferguson posted a photo on her Facebook page of a sign she claimed was on a nail salon wall stating "Sorry, but if you are overweight, pedicures will be $45 due to service fees for pedicurists."

Ferguson posted, "Went to gt (sic) my nails done on Overton Crossing and Frayser Blvd and this is what they have up....so rude." (See her photo above).

The original post has been shared more than 650 times.

Among the Facebook comments one person wrote, "I'm a nail tech and am gobsmacked (sic) with the sign. Just wow."

Ferguson claims the photo was taken at Rose Nails which is located in Frayser - a community in Memphis, Tennessee.

According to WREG a reporter went to the nail salon and the owner denied the sign was ever on a wall at his business. According to the report, he said he has considered one.

The WREG reporter had another photo from another source showing a wider angle of the salon with the same chairs, walls and floor along with the sign. The owner again denied that he put the sign up.

The owner of the salon told the WREG reporter that he decided not to put a sign up. "Instead of putting a sign up he’s decided to just not service someone if they are severely overweight. He said it’s difficult for technicians to give them pedicures and he’s had broken chairs in the past which it hurts his bottom line," according to the WREG report. Read the full report here.