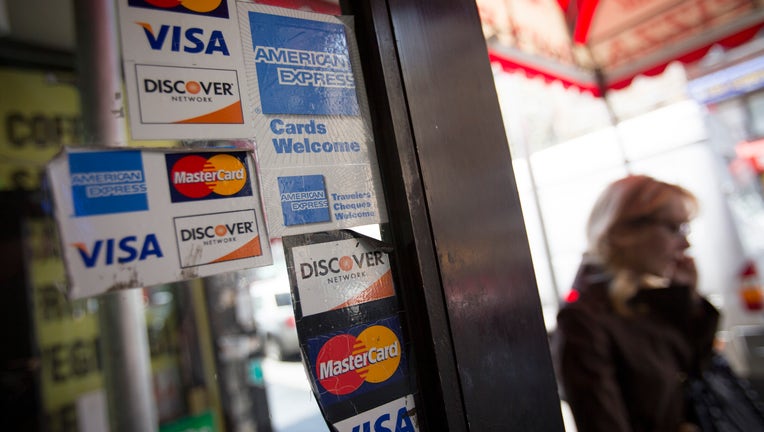 The American Express Co. logo, along with those of Visa Inc., Discover Financial Services and Mastercard Inc., are displayed in a shop window in New York. Photographer: Scott Eells/Bloomberg via Getty Images

About 43% of Americans plan to add debt in the next six months, despite rising interest rates that will make the cost of borrowing more expensive.

Lending Tree, an online loan network that connects borrowers to multiple lenders, surveyed more than 1,000 people and found 61% of them are in debt. But even with the Federal Reserve expected to raise borrowing rates again next week, adding debt is "not necessarily a bad sign," said LendingTree chief credit analyst Matt Schulz

"The truth is that debt can be either a sign of confidence or struggle, and I suspect we’re seeing the effect of both of those in our data," he said. "Many people take on debt because they feel good about their financial situation and aren’t too worried about paying a little interest if it gets them what they want or need. Plenty of others take on debt because they have to. There’s no question that both situations are happening right now."

More than 80% of consumer debt is linked to necessities like health or medical issues or other emergencies, the survey found. But about 25% of Gen Z Americans — people born in the late ‘90s and early 2000s — reported taking on debt to build credit, "though it’s a popular misconception that carrying a credit card balance improves your score."

Despite the massive amount of debt owed by Americans, most are uneasy about adding more. The survey found 60% of people would rather use cash or savings for a purchase — especially millennials and people with poor credit.

Schulz warns that may not be the best strategy.

"The better move is to pay for purchases with a credit card and then use that cash to pay the card off in full every month," Schulz said. "If you can manage to do that, it really is a best-of-both-worlds situation. You get card rewards to help you extend your budget, and you can get them without going into any debt along the way."

RELATED: Inflation zaps US savings rate, a warning sign for some

About 18% of Americans have never carried debt, Schulz said, but it’s a decision that "may end up limiting their potential in the future."

"It may sound good in the short run and be done with the best intentions, but sometimes you have to take on a bit of risk to reach greater success," he said.

Inflation hits 9.1% over past year, highest in 40 years

Consumer prices soared 9.1% compared with a year earlier, the government said, the biggest yearly increase since 1981, and up from an 8.6% jump in May. On a monthly basis, prices rose 1.3% from May to June, another substantial increase, after prices had jumped 1% from April to May.

With inflation at a four-decade high, the Federal Reserve is expected to increase interest rates again soon.

Rising costs have seeped into nearly every corner of the economy. Grocery prices have jumped 12.2% compared with a year ago, the steepest such climb since 1979. Rents have risen 5.8%, the most since 1986. New car prices have increased 11.4% from a year earlier. And airline fares, one of the few items to post a price decline in June, are nevertheless up 34% from a year earlier.

RELATED: Soaring inflation hits 40-year mark, and for many it feels higher

The ongoing price increases underscore the brutal impact that inflation has inflicted on many families, with the costs of necessities, in particular, rising much faster than average incomes. Lower-income and Black and Hispanic Americans have been hit especially hard, because a disproportionate share of their income goes toward such essentials as housing, transportation and food.

The persistence of high inflation has unnerved Federal Reserve Chair Jerome Powell, who has stressed that the central bank wants to see "compelling evidence" inflation is slowing before it would dial back its rate hikes. Such evidence would need to be a "series of declining monthly inflation readings," Powell said at a news conference last month.

RELATED: Tips for 'recession-proofing' your job

Many economists worry that the Fed’s drive to quell inflation will cause it to tighten credit too aggressively even while the economy, by some measures, is slowing. Much higher borrowing costs could trigger a recession, potentially by next year.