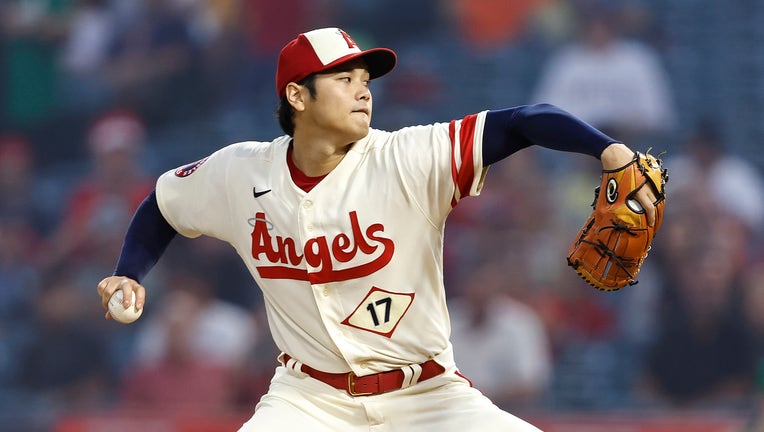 ANAHEIM, CALIFORNIA - SEPTEMBER 29: Shohei Ohtani #17 of the Los Angeles Angels pitches against the Oakland Athletics during the first inning at Angel Stadium of Anaheim on September 29, 2022 in Anaheim, California. (Photo by Michael Owens/Getty Imag

Ohtani held the Oakland Athletics hitless through 7 ⅔ innings with a 4-0 Los Angeles lead at the time. In the top of the 8th, A's outfielder Conner Capel hit a sharp grounder to shortstop Livan Soto but the ball bounced off the 22-year-old infielder's glove, allowing Oakland to break up the no-no.

Dermis Garcia doubled the A's hit total by following up Capel's at-bat with a single to left field.

From the plate, Ohtani had two hits in four at-bats with an RBI in Thursday's 4-2 Angels victory.

Had Ohtani completed the no-no Thursday night, he would have joined Reid Detmers as a second Halo pitcher to complete the feat in 2022. Detmers threw the Angels' 12th no-hitter in franchise history on May 10 against the Tampa Bay Rays.

In addition to putting together an All-Star season at the plate, Ohtani is putting together a Cy Young campaign. The reigning 2021 AL MVP entered Thursday's game with a 14-8 record with a 2.47 ERA and 203 strikeouts.

From the plate, Ohtani took the mound pregame Thursday with a .273 batting average with 34 home runs and 93 RBIs.

With Angels Shohei Ohtani likely taking center stage in the 2022 MLB All-Star Game in Los Angeles, we spoke with fans in Japan for their thoughts on the Angels two-way sensation.