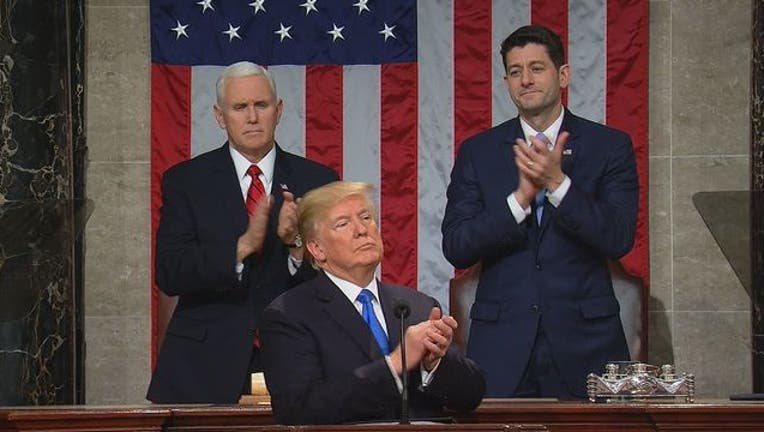 WASHINGTON (AP) — Boastful even within the traditional confines of a State of the Union speech, President Donald Trump inflated the impact of his tax cuts Tuesday night, declared an end to a "war" on energy that did not exist when he took office and displayed a faulty grasp of immigration policy.

A look at some of the statements in his speech and how they compare with the facts:

TRUMP: "We enacted the biggest tax cuts and reform in American history."

THE FACTS: No truer now than in the countless other times he has said the same. The December tax overhaul ranks behind Ronald Reagan's in the early 1980s, post-World War II tax cuts and at least several more.

An analysis by the Committee for a Responsible Federal Budget in the fall put Trump's package as the eighth biggest since 1918. As a percentage of the total economy, Reagan's 1981 cut is the biggest followed by the 1945 rollback of taxes that financed World War II.

Valued at $1.5 trillion over 10 years, the plan is indeed large and expensive. But it's much smaller than originally intended. Back in the spring, it was shaping up as a $5.5 trillion package. Even then it would have only been the third largest since 1940 as a share of gross domestic product.

TRUMP: "After years and years of wage stagnation, we are finally seeing rising wages."

THE FACTS: Actually, they are not rising any faster than they have before. Average hourly pay rose 2.5 percent in 2017, slightly slower than the 2.9 percent increase recorded in 2016 under President Barack Obama.

The last time unemployment was this low, in the late 1990s, average hourly pay was rising at a 4 percent pace.

TRUMP: "The third pillar (of my immigration plan) ends the visa lottery — a program that randomly hands out green cards without any regard to skill, merit or the safety of our people."

THE FACTS: That's a highly misleading characterization. The program is not nearly that random and it does address skills, merit and safety.

The diversity visa program awards up to 50,000 green cards a year to people from underrepresented countries, largely in Africa. It requires applicants to have completed a high school education or have at least two years of experience in the last five years in a selection of fields identified by the Labor Department.

Winners are then randomly selected by computer, from that pool of applicants who met the pre-conditions. Winners must submit to extensive background checks, just like any other immigrant.

TRUMP: "We have ended the war on American energy."

Before the 2016 presidential election, the U.S. for the first time in decades was getting more energy domestically than it imports. Before Obama, George W. Bush was no adversary of the energy industry.

One of Trump's consequential actions as president on this front was to approve the Keystone XL pipeline — a source of foreign oil, from Canada.

TRUMP: "We are now very proudly an exporter of energy to the world."

THE FACTS: There's nothing new in that: The U.S. has long exported all sorts of energy, while importing even more. If Trump meant that the U.S. has become a net exporter of energy, he's rushing things along. The U.S. Energy Information Administration projects that the U.S. will become a net energy exporter in the next decade, primarily because of a boom in oil and gas production that began before Trump's presidency. The Trump White House has predicted that could happen sooner, by 2020. But that's not "now."

TRUMP: "For decades, open borders have allowed drugs and gangs to pour into our most vulnerable communities."

THE FACTS: The borders were far from open before his presidency, however imperfectly they may have been guarded.

The government under Presidents George W. Bush and Barack Obama roughly doubled the ranks of the Border Patrol, and Bush extended fencing to cover nearly one-third of the border during his final years in office. The Obama administration deported more than 2 million immigrants during the eight years he was in office, more than in previous administrations.

Border arrests, a useful if imperfect gauge of illegal crossings, have dropped sharply over the last decade.

TRUMP: "We slashed the business tax rate from 35 percent all the way down to 21 percent, so American companies can compete and win against anyone else anywhere in the world. These changes alone are estimated to increase average family income by more than $4,000. A lot of money."

THE FACTS: Few economists think average incomes will jump by $4,000 simply because companies are paying less in taxes.

The figure cited by Trump comes from his chief economist, Kevin Hassett. Many mainstream economists poked wide holes into this claim, including the author of one of the research papers cited by Hassett. Economists generally say most of the savings from lower corporate taxes would flow to investors, rather than workers. The problem with the $4,000 claim is that Trump is essentially promising $500 billion in income gains across the entire economy from tax cuts that are a small fraction of that total on an annual basis.

TRUMP: "Since we passed tax cuts, roughly 3 million workers have already gotten tax cut bonuses — many of them thousands and thousands of dollars per worker."

THE FACTS: This appears to be true, but may not be as impressive as it sounds. According to a tally of public announcements by Americans for Tax Reform, a conservative group that supported the tax law, about 3 million workers have gotten bonuses, raises or larger payments to their retirement accounts since the tax law was signed.

That's about 2 percent of the more than 154 million Americans with jobs. The Labor Department said before the tax package was signed into law that 38 percent of workers would probably get some form of bonus in 2017.

Few companies have yet granted across-the-board pay raises, which Trump and GOP leaders promised would result from the cut in corporate tax rates included in the overhaul. Many, such as Walmart and BB&T Bank, said they will raise their minimum wages. Walmart made similar announcements in 2015 and 2016.

TRUMP: "Many car companies are now building and expanding plants in the United States, something we haven't seen for decades."

THE FACTS: He's wrong about recent decades. The auto industry has regularly been opening and expanding factories since before Trump became president. Toyota opened its Mississippi factory in 2011. Hyundai's plant in Alabama dates to 2005. In 2010, Tesla fully acquired and updated an old factory to produce its electric vehicles.

Trump also declared that "Chrysler is moving a major plant from Mexico to Michigan." That's not exactly the case, either. Chrysler announced it will move production of heavy-duty pickup trucks from Mexico to Michigan, but the plant is not closing in Mexico. It will start producing other vehicles for global sales and no change in its workforce is anticipated.

TRUMP: "We repealed the core of the disastrous Obamacare — the individual mandate is now gone."

THE FACTS: No, it's not gone. It's going, in 2019. People who go without insurance this year are still subject to fines.

Congress did repeal the unpopular requirement that most Americans carry insurance or risk a tax penalty, but that takes effect next year.

It's a far cry from what Trump and the GOP-led Congress set out to do last year, which was to scrap most of the sweeping Obama-era health law and replace it with a Republican alternative. The GOP blueprint would have left millions more Americans uninsured, making it even more unpopular than "Obamacare."

Other major parts of the overhaul remain in place, including its Medicaid expansion, protections for people with pre-existing conditions, guaranteed "essential" health benefits, and subsidized private health insurance for people with modest incomes.

THE FACTS: That depends on how you define tremendous. The biggest beneficiaries from the tax law are wealthy Americans and corporations.

Most Americans will pay less in taxes this year. The nonpartisan Tax Policy Center estimates that about 80 percent of U.S. households will get a tax cut, with about 15 percent seeing little change and 5 percent paying more.

Middle-class households — defined as those making between roughly $49,000 and $86,000 a year — will see their tax bills drop by about $930, the Tax Policy Center calculates. That will lift their after-tax incomes by 1.6 percent.

The richest 1 percent, meanwhile, will save $51,140, lifting their after-tax incomes by 3.4 percent, or more than twice as much as the middle class.

THE FACTS: That's an exaggeration and goes beyond how even Attorney General Jeff Sessions, the Trump administration's most aggressive anti-gang enforcer, characterizes the scope of the effort.

Sessions said in speeches this week that federal authorities had secured the convictions of nearly 500 human traffickers and 1,200 gang members, "and worked with our international allies to arrest or charge more than 4,000 MS-13 members." On other occasions, the attorney general has specifically said the 4,000 number reflects work done with "our partners in Central America."

That suggests that at least some of the MS-13 members Trump is referring to weren't actually in the U.S when they were arrested, and aren't now in U.S. prisons.

TRUMP: "We have ended the war on beautiful clean coal."

THE FACTS: Coal is not clean. According to the Energy Department, more than 83 percent of all major air pollutants — sulfur dioxide, carbon dioxide, toxic mercury and dangerous soot particles — from power plants are from coal, even though coal makes up only 43 percent of the power generation. Power plants are the No. 1 source of those pollutants.

In 2011, coal burning emitted more than 6 million tons of sulfur dioxide and nitrogen oxides versus 430,000 tons from other energy sources combined.

TRUMP: "Last year, the Congress passed, and I signed, the landmark VA Accountability Act. Since its passage, my administration has already removed more than 1,500 VA employees who failed to give our veterans the care they deserve."

THE FACTS: This statement is inaccurate. It's true that more than 1,500 firings at the VA have occurred so far during the Trump administration. But more than 500 of those firings occurred from Jan. 20, when Trump took office, to late June, when the new accountability law began to take effect. That means roughly one-third of the 1,500 firings cannot be attributed to the new law.

Congress passed the legislation last June making it easier to fire VA employees and shortening the time employees have to appeal disciplinary actions. But the law's impact on improving accountability at the department remains unclear: More VA employees were fired in former President Barack Obama's last budget year, for instance, than in Trump's first.

TRUMP: "Last year, I also pledged that we would work with our allies to extinguish ISIS from the face of the Earth. One year later, I am proud to report that the coalition to defeat ISIS has liberated very close to 100 percent of the territory just recently held by these killers in Iraq and in Syria and in other locations, as well. But there is much more work to be done. We will continue our fight until ISIS is defeated."

THE FACTS: Although it's true that the Islamic State group has lost nearly 100 percent of the territory it held in Syria and Iraq when the U.S. began airstrikes in both countries in 2014, Syria remains wracked by civil war, with much of that country controlled by the government of Russian ally Syrian President Bashar Assad and not by U.S.-allied groups. The Iraqi government has declared itself fully liberated from IS.

The progress cited by Trump did not start with his presidency. The U.S.-led coalition recaptured much land, including several key cities in Iraq, before he took office. And the assault on Mosul, which was the extremists' main stronghold in northern Iraq, was begun during the Obama administration. But in the past year the counter-ISIS campaign has accelerated, based largely on the approach Trump inherited.

He's right that more remains to be done to eliminate IS as an extremist threat, even after it has been defeated militarily. The group is still able to inspire attacks in the West based on its ideology, and it is trying to make inroads in places like Afghanistan and Libya.