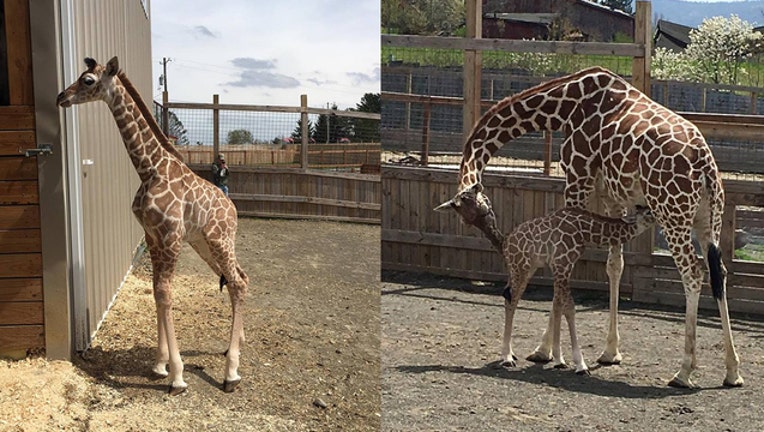 HARPURSVILLE, New York (FOX 13) - April's baby giraffe, Tajiri - also now known to many as Taj - had his first bits of outdoor time at the end of April and beginning of May - and the curious little guy almost can't be any cuter.

Animal Adventure Park shared pictures on Facebook of Taj's first day outside on April 28. The park shared another photo of Taj standing outside the stalls on May 2.

The park is busy getting ready to open for the season. After all of the off-season publicity, Patch told FOX 13 they expect to see an influx of new visitors when they open later this month.

"We hope you see you this summer and help welcome Tajiri to our family,” Swilley added.

Heavy rains in the two weeks before the open weren't slowing the park's crew down. They posted a video of a muddy landscape in between photos of a new Red Kangaroo Joey and a video of bears play-fighting in a pool.

April the giraffe, her pregnancy and the birth of little Tajiri were viral sensations earlier this year after the New York park installed a live webcam in April’s stall, allowing millions of people to follow the last few weeks of her pregnancy and, finally, the baby giraffe’s birth.

For two weeks, the park invited April’s fans to weigh in – at $1 per vote – on what the baby boy’s name should be.  Out of 10 finalists, they chose to allow keeper Allysa Swilley to pick.  She chose the name Tajiri, explaining that it stands for king, hope, and confidence in Swahili.

“Hope is something that Tajiri brought not only the global community but giraffes as well,” Allysa said in announcing the name. “This experience has given giraffes a voice and the species hope. We are also confident that we can move forward into a future where giraffes are no longer under threat.”

The funds raised by the voting will be distributed to giraffe conservation efforts in the wild, Ava’s Little Heroes, the Black Mamba Anti-Poaching Unit and Animal Adventure Park.

“We are proud of the powerful, hope-inspiring name Tajiri for our calf,” said Jordan Patch, owner of Animal Adventure Park. “We know the calf will carry the name well.”

- Giraffe born in front of park-goers at Memphis Zoo