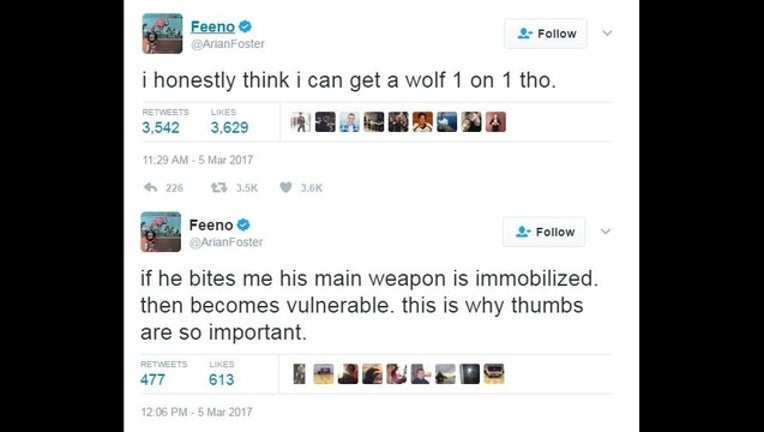 ELY, Minn. (KMSP) - In a battle of man vs. wolf, former NFL running back Arian Foster believes he'd come away the victor. But officials at the International Wolf Center, based in Ely, Minnesota, say not so fast.

In a series of tweets, Foster described how he has advantages, such as size and his opposable thumbs, over a wolf. He says he could go after its neck to take it out.

At 230 pounds, Foster would have the size advantage over a North American grey wolf, which weighs about 65 to 130 pounds, according to the IWC. But a lone wolf can take down a half-ton bison or musk ox - all without opposable thumbs.

IWC officials say wolves' greatest strengths are their upper bodies and crippling bite, which can crack the bones of their prey.

"[Wolves] are strong, intelligent predators that should be respected and left alone in the wild," read the IWC's release. "We hope that Arian never comes in contact with a wild wolf, but if he does, we encourage him to admire its beauty and leave it alone for the safety of both himself, and the wolf. Just a sighting would give Arian a pretty terrific story to tell."