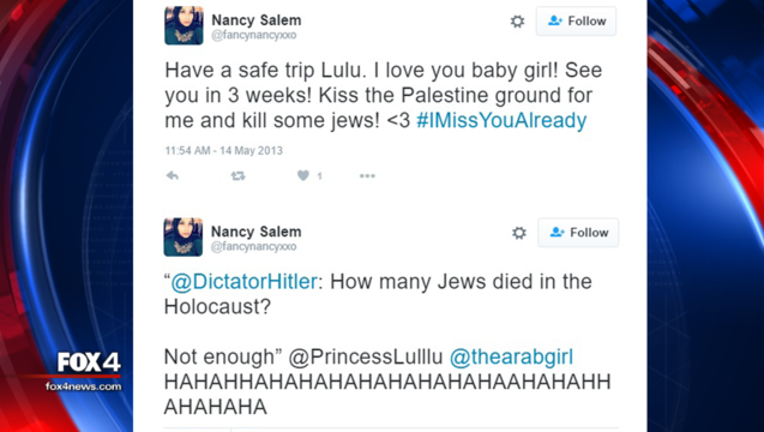 ARLINGTON, Texas - A former pre-school teacher is apologizing after she was fired when past anti-Semitic comments she posted on social media came to light.

Nancy Salem was fired from the Children’s Courtyard Daycare after a report from Canary Mission, a website created to “combat the rise of anti-Semitism on college campuses.”

The website outed her and 23 other current and former UT Arlington students for making racist and violent comments.

In a screen grab of Salem’s Twitter in May 2013, she tweeted “Have a safe trip Lulu. I love you baby girl! See you in 3 weeks! Kiss the Palestine ground for me and kill some jews! <3 #IMissYouAlready.”

Salem declined to comment on camera but released the following statement to FOX 4:

Salem was suspended and then fired after the daycare found out about her past comments. It's unclear which Children's Courtyard Daycare she worked at. Arlington police say she did not work in the South Arlington location.

“The offensive comments certainly don't reflect our views. Our employees are expected to uphold certain standards of personal and professional conduct,” a daycare spokesperson said. “Our senior leadership thoroughly investigated this matter. This person no longer works for our company.”

A UTA spokesperson says Salem was never admitted into the university.

"As one of the most diverse campuses in the nation, inclusion and respect are at the very core of the values of The University of Texas at Arlington. UTA condemns statements of hate while acknowledging the principles of free speech and open expression," the spokesperson said. "We welcome and encourage the sharing of ideas, thoughts and opinions, but we also expect respect and civility from students, faculty and staff."