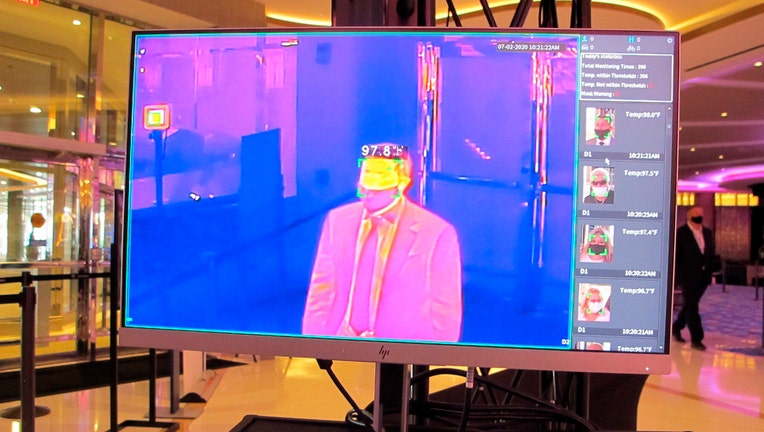 ATLANTIC CITY, N.J. (AP) - Five Atlantic City casinos are not physically checking the temperatures of guests entering the property, workers said as they pushed New Jersey's governor to require the casinos to do so to help prevent the spread of the coronavirus.

In an online press conference Thursday, members of Local 54 of the Unite-Here union said four casinos owned by Caesars Entertainment — Caesars, Harrah's, Bally's, and the Tropicana — are not physically screening casino guests for a fever before letting them onto the property. A fever is one sign of potential infection with the coronavirus.

The Ocean casino has been doing verbal screenings as well.

The workers called on Gov. Phil Murphy to mandate physical temperature checks for anyone entering a casino.

The four Caesars casinos say they use a verbal screening process to question guests.

But the union says they don't even do that at all times. Donna DeCaprio, the union's secretary-treasurer, said the union has documented at least 180 instances of casinos failing to verbally screen guests since most of the casinos reopened in the first week of July.

She also said the union has documented 75 instances of hotel rooms not being thoroughly cleaned daily as called for under protocols formulated and agreed to by the casinos themselves.

"We're not doing a good job even being partially open," said Jason McKnight, a bartender at Harrah's. "The rooms aren't being cleaned on a daily basis the way they are supposed to. This is a lot of people in an enclosed place, and we're not rising to the challenge."

Caesars Entertainment responded in a statement that its procedures were developed "with an expert in the field" and meet all requirements from the state and recommendations from federal health authorities.

"Caesars Entertainment's Atlantic City health and safety plan fully complies with all governmental directives," said Steve Callender, the company's regional president. "In addition to our enhanced cleaning protocols and other requirements that apply to our valued team members, all of our guests must pass a screening process before being allowed into our properties and must wear face masks in compliance with the governor's orders."

A message seeking comment from Murphy's administration was left Thursday.

Nevada requires its hotel guests to undergo temperature checks, but does not require it of casino patrons. Nonetheless, some casinos on and off the Las Vegas strip do conduct temperature checks, using hand-held thermometers or forehead scanners. A bill passed this week by the Nevada legislature requires temperature scans for all casino employees.

Janey Negron, a bartender at the Tropicana, said the casino has so many entrance points that not all guests are being checked upon entering.

"They do not take your temperature," she said. "They just let you walk on by."

DeCaprio, the union official, said several Atlantic City casino workers have contracted the virus, but none of the cases is believed to have originated from exposure at a casino.

"It appears they did not contract it at one of our properties," she said. "It happened shortly after the casinos reopened," indicating that the exposure happened before the July 2 or 3 reopening dates for most casinos, she said.