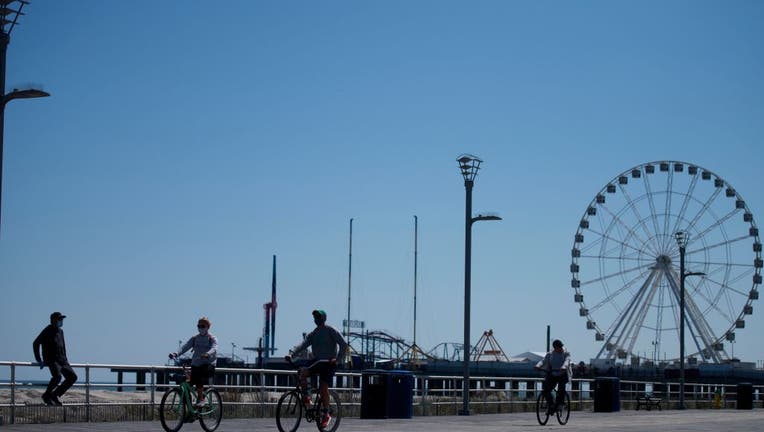 ATLANTIC CITY, NJ - MAY 07: A mean wearing a mask sits on the boardwalk railing as cyclists pedal past during the coronavirus pandemic on May 7, 2020 in Atlantic City, New Jersey. For the past 7 and a half weeks all New Jersey casinos, restaurants, a

ATLANTIC CITY, N.J. (AP) — Many folks could use a drink right about now, and starting Friday they’ll be able to do it while strolling the Atlantic City Boardwalk.

Searching for ways to boost business and tourism amid the coronavirus pandemic in a resort whose casinos remain closed and restaurants still can’t offer indoor dining, the city dropped a longtime prohibition on drinking on the Boardwalk to try to capture the party spirit of places like New Orleans.

Mayor Marty Small issued an executive order on Monday allowing for public consumption of alcohol in a few areas including the Boardwalk, the non-residential areas of Gardner's Basin, and some local streets just off the Boardwalk in an area known as the “Orange Loop” after the streets designated with orange markings in the Monopoly board game.

“It's the Bourbon Street vibe we're going for,” said Pat Fasano, who owns a restaurant on the Boardwalk and another just off it on New York Avenue.

He and other merchants said offering to-go drinks will help businesses that were devastated by virus-related closures since March.

“Having the ability to sell drinks to go is definitely helpful because; Who's in the bars now? No one," he said. "You go from 100 to zero during the pandemic.”

The move stems from a measure New Jersey enacted a few weeks ago allowing towns to temporarily serve alcohol for consumption in designated public areas during the pandemic. Several towns have taken advantage of it.

Atlantic City has long wanted to allow people to take beer and cocktails onto its Boardwalk as part of the long association of the iconic place with strong drink: The introduction of the hit HBO series “Boardwalk Empire," about corruption in the seaside resort during prohibition, ended with hundreds of bottles of bootleg liquor washing up on Atlantic City's shoreline.

The current experiment will end either in November, or when Gov. Phil Murphy ends restrictions on bars, whichever comes sooner. Various measures that would have allowed Atlantic City to permanently allow Boardwalk drinking have come and gone in the state Legislature.

It requires drinks to have been purchased at a licensed establishment; cups must bear the name or logo of that establishment and be no larger than 16 ounces.

Steve Callender, a senior vice president with Eldorado Gaming, which owns Atlantic City's Tropicana casino, is also president of the Casino Association of New Jersey, which supports the measure.

“It's going to be difficult to ramp back up and regain the momentum we had,” he said. “I've been on the Boardwalk my whole life, and I have customers constantly asking me, ‘Why can’t I go out onto the Boardwalk to watch fireworks with a cold beverage?'”