The U.S. and western allies said they will not recognize the "sham" annexation, but Putin vowed to would protect the regions as part of its sovereign territory.

KYIV, Ukraine - Russia pounded Ukrainian cities with missiles, rockets and suicide drones, with one strike reported to have killed 25 people, as it moved Friday to fold more seized Ukrainian territory into Russia itself and under the protection of its nuclear umbrella, opening an internationally condemned dangerous new phase of the seven-month war.

But even as it prepared to celebrate the incorporation into Russia of four occupied Ukrainian regions, defying international law and the prospect of further Western sanctions, the Kremlin was facing another stinging battlefield loss. Russian and Western analysts reported the imminent Ukrainian encirclement of the city of Lyman, that — if retaken — could open the path for Ukraine to push deep into one of the very regions that Russia is annexing.

Salvos of Russian strikes reported in four Ukrainian cities together amounted to the heaviest barrage that Russia has unleashed for weeks. It follows analysts’ warnings that Russian President Vladimir Putin is likely to dip more heavily into his dwindling stocks of precision weapons and step up attacks as part of a strategy to escalate the war to an extent that would shatter Western support for Ukraine.

In the Ukrainian city of Zaporizhzhia, anti-aircraft missiles that Russia has repurposed as ground-attack weapons rained down on people who were waiting in cars to cross into Russian-occupied territory, so they could bring family members back across the front lines, said the deputy head of Ukraine's presidential office, Kyrylo Tymoshenko.

The general prosecutor's office said 25 people were killed and 50 wounded. The strike left deep impact craters and sent shrapnel tearing through the humanitarian convoy's lined-up vehicles, killing their passengers. Nearby buildings were demolished. Trash bags, blankets and, for one victim, a blood-soaked towel, were used to cover bodies. 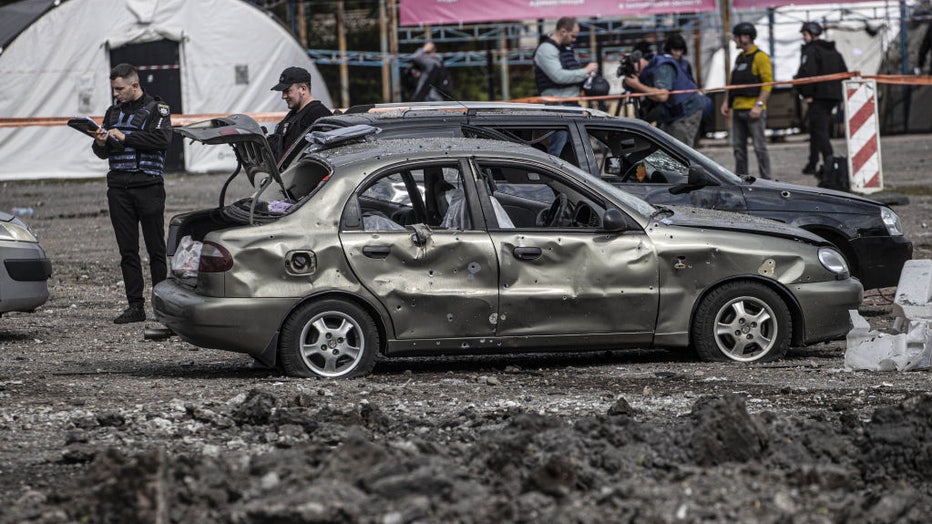 Russian-installed officials in Zaporizhzhia blamed Ukrainian forces for the strike, but provided no evidence.

Russian strikes were also reported in the city of Dnipro. The regional governor, Valentyn Reznichenko, said at least one person was killed and five others were wounded by Russian Iskander missiles that slammed into a transportation company, destroying buses, and that also damaged high-rise buildings.

The attacks come as Moscow prepares Friday to annex four occupied regions, likely including territory that it doesn't actually control. The Kremlin paved the way for the land-grabs with "referendums," sometimes at gunpoint, that Ukraine and its Western backers universally dismissed as rigged shams. Those regions include areas near Zaporizhzhia, but not the city itself, which remains in Ukrainian hands.

Russian President Vladimir Putin was expected to give a major speech at a Kremlin ceremony to fold the Ukranian regions of Luhansk, Donetsk, Kherson and Zaporizhzhia into Russia. Their pro-Moscow administrators would sign annexation treaties in the Kremlin’s ornate St. George’s Hall, Kremlin spokesman Dmitry Peskov said.

Putin also issued decrees recognizing the supposed independence of the Kherson and Zaporizhzhia regions, steps he previously took in February for Luhansk and Donetsk and earlier for Crimea.

"The enemy rages and seeks revenge for our steadfastness and his failures," he posted on his Telegram channel. "You will definitely answer. For every lost Ukrainian life!"

The U.S. and its allies have promised to pile even more sanctions on Russia and to offer billions of dollars in extra support for Ukraine as the Kremlin duplicates the annexation playbook it followed when it incorporated Ukraine’s Crimean Peninsula in 2014.

With Ukraine vowing to take back all occupied territory and Russia pledging to defend its gains, and threatening nuclear-weapon use to do so, the two nations are on an increasingly escalatory collision course.

That was underscored by the fighting for the city of Lyman, some 160 kilometers (100 miles) southeast of Kharkiv, Ukraine’s second-largest city.

A key node for Russian military operations in the contested Donbas region, it is sought-after prize for a Ukrainian counteroffensive that has had spectacular success since its launch in late August. Retaking Lyman could allow Kyiv to push into deeper into Russian-occupied Luhansk, which would be a stinging blow for Moscow after its stage-managed "referendum" there.

The Washington-based Institute for the Study of War said the city's fall to Ukrainian forces "is imminent," unless Russia can ward off the collapse with speedy reinforcements, which appeared "highly unlikely."

Ukraine is also keeping close watch of its Russia-allied neighbor to the north, Belarus, which the Kremlin used as a staging ground for its ultimately defeated initial attempt to Kyiv in the opening stage of the invasion.

The ongoing development of airfields, barracks and warehouses at two Belorussian military bases suggests that Russia may again try to use Belarus as a launch pad to open another front in the war, said Oleksii Hromov, a senior commander in the Ukrainian armed forces’ General Staff.

Heightening the tensions are Russia’s partial military mobilization and allegations of sabotage of two Russian pipelines on the Baltic Sea floor that were designed to feed natural gas to Europe.

Ukraine’s Western supporters have described the Kremlin-orchestrated votes on whether to live under Russian rule as bald-faced land grabs based on lies. They say some people were forced to vote at gunpoint, without independent observers on territory from which thousands of residents have fled or been forcibly deported.

In unusually strong language, U.N. Secretary-General Antonio Guterres told reporters Thursday in New York that Russia’s annexation would violate the U.N. Charter and has "no legal value." He described the move as "a dangerous escalation" and said it "must not be accepted."

"Any decision by Russia to go forward will further jeopardize the prospects for peace," Guterres said.