The incident unfolded at around 11:00 a.m. at a senior living community, and according to Mesa Police officials, the baby was left outside for about five minutes, on a day when the Valley is dealing with excessive heat. FOX 10's Marissa Sarbak reports.

MESA, Ariz. - A baby has been taken to a hospital for observation after being found abandoned in Mesa.

Mesa Police say the baby was found on July 22 at a home near McKellips and Recker Roads. The scene is located in a senior living community.

"Approximately five minutes before she opened the door, she heard her doorbell ring. It took her that long to get over to the door and get it open. She was expecting a package or something like that," said Detective Richard Encinas with the Mesa Police Department.

Data from a National Weather Service weather station located near the scene, in an area to the east of Brown and Recker Roads, reveal that temperatures in the area at the time of the incident was 108°F, with a heat index temperature of 112°F. 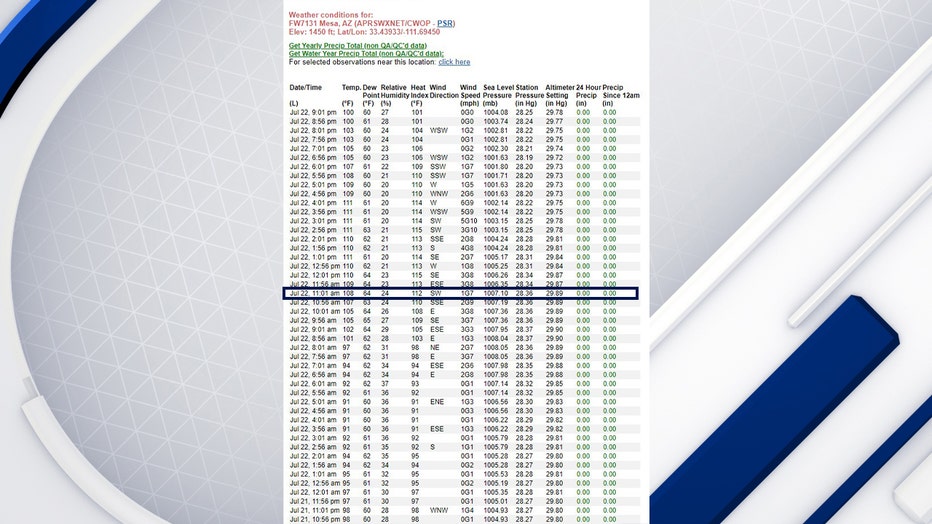 Data from the National Weather Service in regards to temperatures in an area near Recker and McKellips in Mesa on Jul 22, when a child abandonment incident happened.

"Our best guess, based off of what we’ve been told, is the baby’s got to be a day old or younger," said Det. Encinas.

We have learned that many residents in the community leave for the summer.

"Luckily it ended OK for the baby this time, but it could’ve been a much worse situation with the heat out here today. It’s really hot today," said Det. Encinas.

People living in the area did not realize what was happening when police first got to the scene.

"I was going to lunch and went to get in my truck and I saw the cop. I had no idea what for, but I did see another couple police units in that area," said one area resident. "I don’t know what to think. I mean, I never thought something like that would happen here. I mean, who does that?"

"It’s unimaginable. I just can’t even -- somebody’s not thinking clearly," said Pete Evans, who works in the area.

"It's disgusting how people can do that," said Mathew Farnsworth, who also works in the area. "The world is in a bad spot right now."

Police are now searching for whoever left the child behind. Detectives are looking for witnesses, and surveillance video, but officials admit it could be just about anyone, anywhere.

Mesa Police officials are reminding people about Arizona's Safe Haven law, which was enacted in 2001. Under the law, a person can drop off a baby born no more than 72 hours before to a safe haven provider. Providers include on-duty firefighters, fire stations, on-duty EMT and paramedics, and health care institutions. Officials say the person can remain anonymous, but must not leave the baby alone.

"For those people who might be in this situation or have ever contemplated that, we do have that, where no criminal charges will be pressed against that person, as long as they follow those rules of the Safe Haven Law," said Det. Encinas. 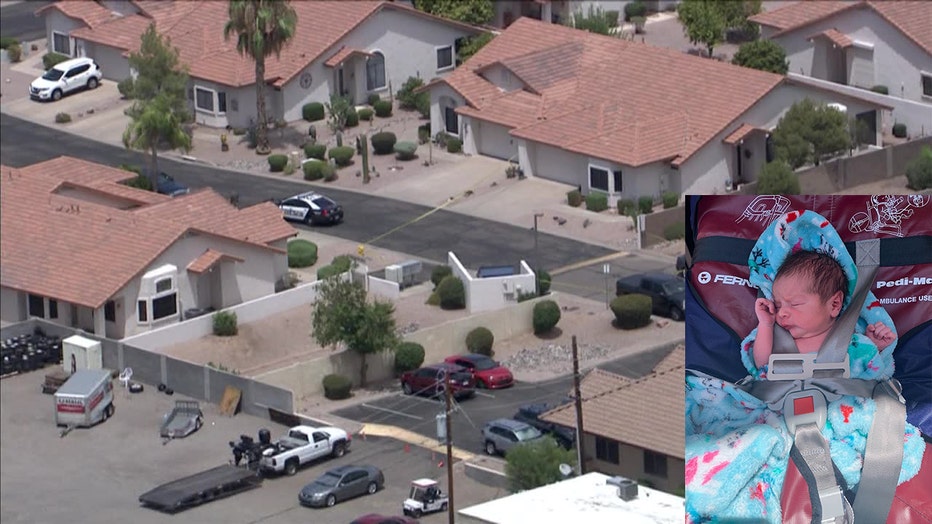