President Biden laid out details of the Student Loan Debt Plan, forgiving $20,000 of debt for Pell Grant recipients and $10,000 for all other student loan borrowers. The payment pause has also been extended one more time through December 31, 2022.

WASHINGTON - The Biden administration is moving forward with an overhaul of several student debt forgiveness programs, aiming to make it easier for borrowers to get relief if they are duped by their colleges or if they put in a decade of work as public servants.

The Education Department on Monday finalized a package of rules that it proposed earlier this year. The new rules take hold in July and are separate from President Joe Biden’s sweeping student debt forgiveness plan, which has been held up in court amid a legal challenge from Republican-led states.

Education Secretary Miguel Cardona called it a "monumental step" that will make it faster and simpler to get debt relief. "The Biden administration is fixing a broken system and putting borrowers first," Cardona told reporters on Monday.

RELATED: Biden cancels $10K in student loan debt per borrower — what to know

Chief among the changes is a revamp of a program known as borrower defense, which offers debt forgiveness to students whose colleges make false advertising claims or otherwise commit fraud. The program aims to help the victims of predatory for-profit colleges, but it has been bogged down by complex rules and political battles, resulting in a mounting backlog of applications.

The new policy clarifies that the Education Department can review claims from individual borrowers or it can grant forgiveness to huge swaths of students from the same college, if it has been found to have committed fraud. The department can pursue such "group discharge" claims on its own or in response to requests from states or nonprofit legal groups. 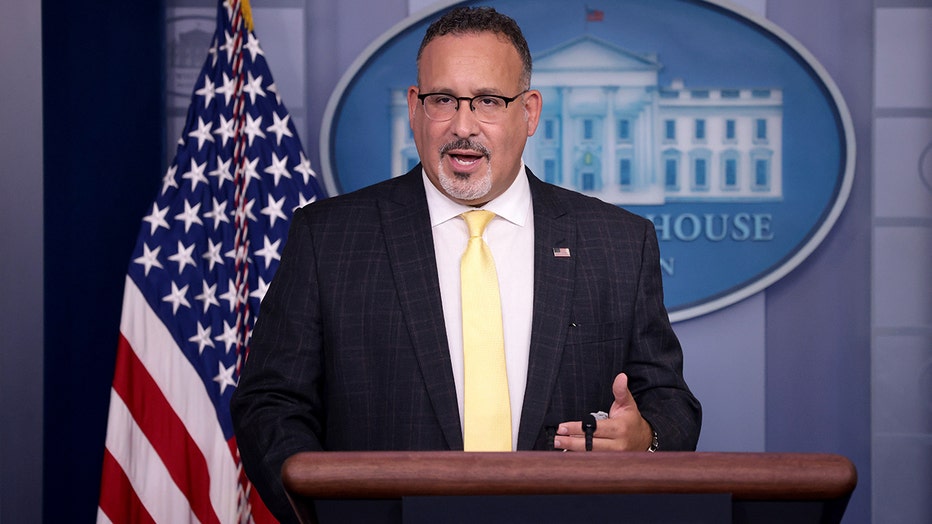 It’s a reversal from Trump-era policies that eliminated group discharges and made it harder for individuals to qualify for relief. The new rule cements the department’s ability to erase debt for thousands of borrowers in a single action, as the Biden administration has already done for those who attended ITT Tech, Corinthian Colleges and other for-profit college chains.

In a major shift, the federal government will also be able to force colleges to cover the cost when their students are granted loan cancellation because of fraud. Those costs have typically been passed to taxpayers, prompting complaints from conservative critics who say the program too freely cancels debt at the public’s expense.

"We’re putting students ahead of special interests," said Cardona, adding that his agency will go after "shady schools" that leave students with heavy debt and "useless" college degrees.

The rules were embraced by student advocates but blasted by an industry group representing for-profit colleges. The group said the rules will deprive schools of due process protections, and it questioned how closely the department reviewed the more than 5,000 public comments responding to its initial proposal.

"The department has cut corners in a rush to ram through a punitive borrower defense rule with serious legal and regulatory flaws that could undermine the American education system," said Jason Altmire, a former Democratic congressman and president and CEO of Career Education Colleges and Universities.

The overhaul also brings big changes to the Public Service Loan Forgiveness program, which was created by Congress as an incentive for government and nonprofit workers but has failed to deliver its promise because of notoriously complex rules.

Under the existing rules, teachers, nurses and other public workers can get the rest of their federal student debt erased after making 120 monthly payments. All payments must be made in full and within 15 days of their due date, otherwise they don't get counted toward the 120 monthly payments.

The new rule erases the 15-day rule, allowing payments to count even if they are made late or in multiple installments. It also allows borrowers to make up to a year of payments in advance in a single sum, rather than making monthly payments.

Borrowers in certain situations will also be able to make progress toward debt forgiveness even if they aren’t making payments. Those who get their student loans paused for cancer treatment, military service or the Peace Corps, for example, will be treated as if they are still making monthly payments during that time.

More flexibility will also be added to a separate program offering debt cancellation to those with disabilities.

That program cancels federal student debt for people who are permanently disabled and unable to generate significant income. But many have been granted that relief later had their debt reinstated because they failed to submit paperwork during a three-year monitoring period.

The new rule will eliminate the monitoring period and make more types of disabilities eligible for cancellation.

Loosening the rules around existing debt forgiveness programs has been a priority for the Biden administration, which has already granted $38 billion in debt cancellation for defrauded students, public students and others. That doesn't include Biden's broad cancellation plan, which is estimated to cost about $400 billion.

A federal appeals court has temporarily blocked Biden's plan, creating uncertainty for millions of borrowers who were told they would get up to $20,000 canceled. The Education Department has said it's still processing applications even while it's barred from erasing the debt. Cardona on Monday said his agency is moving "full steam ahead" with the plan.

The Associated Press education team receives support from the Carnegie Corporation of New York. The AP is solely responsible for all content.