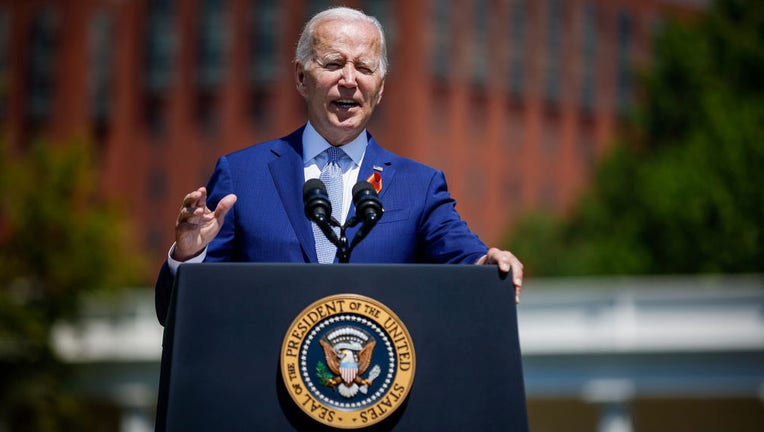 President Joe Biden delivers remarks at an event to celebrate the Bipartisan Safer Communities Act on the South Lawn of the White House on July 11, 2022 in Washington, DC. (Chip Somodevilla/Getty Images)

WASHINGTON - President Joe Biden welcomed a crowd to the White House lawn on Monday to showcase a new law meant to reduce gun violence, saying the measure represents "real progress" after years of inaction. But he also acknowledged that more has to be done in a country "awash in weapons of war" — as the 16-day-old law already has been overshadowed by yet another horrific mass shooting.

But the "celebration" Monday morning came a week after a gunman in Highland Park, Illinois, killed seven people at an Independence Day parade, a stark reminder of the limitations of the new law in addressing the American phenomenon of mass gun violence. And it comes as Democratic governors have taken up the mantle of offering outrage in the face of gun violence.

Biden hosted hundreds of guests on the South Lawn, including a bipartisan group of lawmakers who crafted and supported the legislation, as well as local officials — including Illinois Gov. J.B. Pritzker and Highland Park Mayor Nancy Rotering — as well as the families of victims of both mass shootings and everyday gun violence.

"Because of your work, your advocacy, your courage, lives will be saved today and tomorrow because of this," Biden said.
"We will not save every life from the epidemic of gun violence," he added, "But if this law had been in place years ago, even this last year, lives would have been saved."

Still, Biden said, "we’re living in a country awash in weapons of war." He repeated his call on Congress to pass a federal ban on assault weapons and high capacity magazines — or at minimum to require more stringent background checks and training requirements before purchases.

He also said Congress should pass legislation to hold gun-owners accountable if their weapons are improperly stored and are used to commit violence.

"We can’t just stand by," Biden said. "We can’t let it happen any longer. With rights come responsibilities." He added: "If you own a weapon, you have a responsibility to secure it and keep it under lock and key."

Biden on Saturday invited Americans to share with him via text — a new White House communications strategy — their stories of how they've been impacted by gun violence, tweeting that "I’m hosting a celebration of the passage of the Safer Communities Act." He told some of their stories on Monday of people traumatized by shootings and kids left orphaned by gun violence.

The law is the the most impactful firearms violence measure Congress has approved since enacting a now-expired assault weapons ban in 1993. Yet gun control advocates — and even White House officials — say it's premature to declare victory.
"There's simply not much to celebrate here," said Igor Volsky, director of the private group Guns Down America.

"It’s historic, but it’s also the very bare minimum of what Congress should do," Volsky said. "And as we were reminded by the shooting on July 4, and there’s so many other gun deaths that have occurred since then, the crisis of of gun violence is just far more urgent."

"We have a president who really hasn’t met the moment, who has chosen to act as a bystander on this issue," Volsky said. "For some reason the administration absolutely refuses to have a senior official who can drive this issue across government."

The president signed the bipartisan gun bill into law on June 25, calling it "a historic achievement" at the time.
On Monday, Biden said the law's passage should be a call to action for further action to reduce gun violence. "Will we match thoughts and prayers with action," Biden asked. "I say yes. And that’s what we’re doing here today."

White House officials said Biden doesn't see the passage of the bill as the finish line, but rather a foundation that needs to be built on. The Illinois shooting occurred nine days after the bill signing.

"I recently signed the first major bipartisan gun reform legislation in almost 30 years into law, which includes actions that will save lives," Biden said after July 4th shooting. "But there is much more work to do, and I’m not going to give up fighting the epidemic of gun violence."

On Friday, Biden responded to the assassination of former Japanese Prime Minister Shinzo Abe by taking note of how the shooting had shocked people in Japan. The country has a strikingly low incidence of gun violence compared to the U.S., which has experienced thousands of gun deaths already this year.

Most of the new law's $13 billion in spending would be used for bolstering mental health programs and for schools, which have been targeted by shooters in Newtown, Connecticut; Parkland, Florida; and many other gun massacres. It was the product of weeks of closed-door negotiations by a bipartisan group of senators who emerged with a compromise.

It does not include far tougher restrictions that Democrats and Biden have long championed, such as a ban on assault-type weapons and background checks for all gun transactions. Biden on Monday was expected to reiterate his call for those tougher measures, but prospects are slim for any further congressional action.