Biden speaks at Port of Los Angeles amid high US inflation

LOS ANGELES - In President Joe Biden’s estimation, the U.S. is in a strong position to overcome the worst inflation in more than 40 years. But so far, inflation just keeps getting the better of the U.S. economy and of the Biden administration.

The president's policies, his deals with the private sector, regulatory actions and public jawboning have failed so far to stop prices from marching upward.

Biden on Friday pledged to keep fighting against inflation while touring the Port of Los Angeles, America's busiest port and a place that the White House said last October would be key for reducing price pressures.

"My administration is going to continue to do everything we can to lower the prices to the American people," the president said after a decidedly bleak new report on consumer prices.

The Labor Department reported Friday that consumer prices climbed 8.6% in May from a year ago. That’s the worst reading since December 1981 and a troubling sign for the economy as rate hikes by the Federal Reserve have yet to tamp down inflation as gasoline costs are surging upward. Rising prices are imperiling the U.S. economy as well as Democratic control of the House and Senate, putting Biden on the defensive.

AAA separately reported that average U.S. gas prices reached a record $4.99 a gallon, an increase that has overwhelmed the president's previous efforts to reduce overall inflation. The pain at the pump is hurting Biden’s public approval ahead of the midterm elections.

The Port of Los Angeles moved to round-the-clock operations last October under an agreement that the White House helped to shepherd. The goal was to clear backlogs of ships waiting to dock and containers waiting to flow into the country, a logjam that was pumping up prices as the world began to recover from the coronavirus pandemic.

The port is now moving out a record 200,000 containers on a rolling 30-day average. But the forces driving inflation have largely shifted to rising energy and food costs in the aftermath of Russia's invasion of Ukraine. There has also been a broader increase in prices that go beyond supply chain issues. Housing, airfare and medical services expenses rose significantly in May.

Gene Seroka, executive director of the Port of Los Angeles, said there were many levers that caused performance to improve in terms of getting goods to consumers and businesses faster. But he specifically credited the "convening powers of the federal government to bring people to the table" and the Biden administration's focus on the supply chain.

"We’ve reduced those ships that have been waiting to get into the port by 75% this year," Seroka said. "These guys are really working because we've got strong consumer demand still."

The Biden administration is seeking to further reduce shipping prices with a bipartisan bill that the House could pass as soon as next week. The bill would give the Federal Maritime Commission tools to make ocean-based trade more efficient and price competitive, improving the flow of exports and imports.

"What I have found here in California is that they want us to do whatever we could possibly do to address the inflation problem — and this is clearly one significant part of the problem," said Rep. John Garamendi, D-Calif., a sponsor of the bill.

Rep. Dusty Johnson, R-S.D., said he saw a need for the additional tools in part after a cheese processor in his state had two million pounds of lactose rot because no carriers would take the product even though 60% of shipping containers were going back to Asia empty.

"This is not a silver bullet with regard to inflation," said Johnson, who sponsored the bill. But he noted that, as the provisions get implemented, "this will absolutely have an impact on inflation." 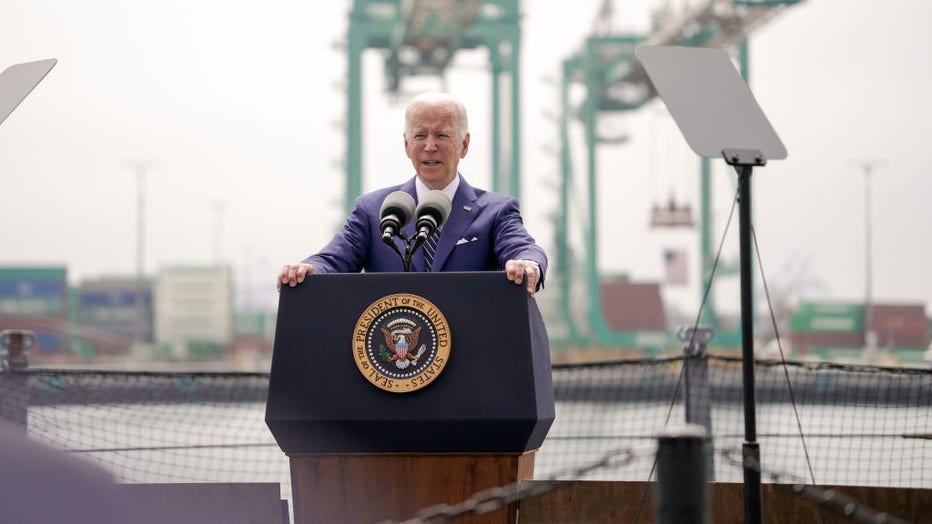 US President Joe Biden speaks at the Port of Los Angeles in Los Angeles, California, US, on Friday, June 10, 2022. Photographer: Kyle Grillot/Bloomberg via Getty Images

Strong consumer demand has been a mixed blessing for Biden. It reflects the robust job growth and solid household balance sheets that followed the $1.9 trillion coronavirus relief package passed last year. But demand has consistently outpaced supply, causing prices to rise to levels that are forcing the Federal Reserve to try to slow growth and possibly risk a recession.

The White House contends that the U.S. can tackle inflation without stumbling into a downturn because the economy is so strong with its 3.6% unemployment rate that it can withstand a slowdown.

Biden is also trying to frame inflation as a global challenge, having been triggered first by the pandemic and then by Russia's invasion of Ukraine. The president is attempting to rebut criticism by Republican lawmakers that inflation was the result of his government aid being too generous and his restrictions on U.S. oil production too onerous.

Biden has attempted to slow inflation by improving port operations and twice releasing oil from the U.S. strategic reserve, in addition to other regulatory initiatives and a domestic agenda that includes budget deficit reduction and would need congressional approval.

The visit to the port occurs as Biden has been hosting the Summit of the Americas in Los Angeles. On Friday, he will also announce a declaration on migration and hold a working luncheon with the heads of government and state attending the conference for nations in the Western Hemisphere.

And mindful of the campaign season, Biden on Friday will attend two fundraising receptions for the Democratic National Committee.