Boris Johnson officially announced plans to resign as prime minister of the United Kingdom after more than 50 members of his cabinet quit when it was revealed Johnson knew about accusations of sexual misconduct against a high-ranking party member. He says he hopes to remain in a caretaker position as his Conservative Party elects a new prime minister, a process that may take roughly two months.

LONDON - He was the mayor who basked in the glory of hosting the 2012 London Olympics, and the man who led the Conservatives to a thumping election victory on the back of his promise to "get Brexit done."

But Boris Johnson's time as prime minister was marred by his handling of the coronavirus pandemic and a steady stream of ethics allegations, from alcohol-fueled government parties that broke lockdown rules to how he handled a sexual misconduct scandal involving a senior party lawmaker.

Here is a timeline of events relating to Johnson's political career:

2001-2008: Serves as a member of Parliament in the House of Commons representing the constituency of Henley. 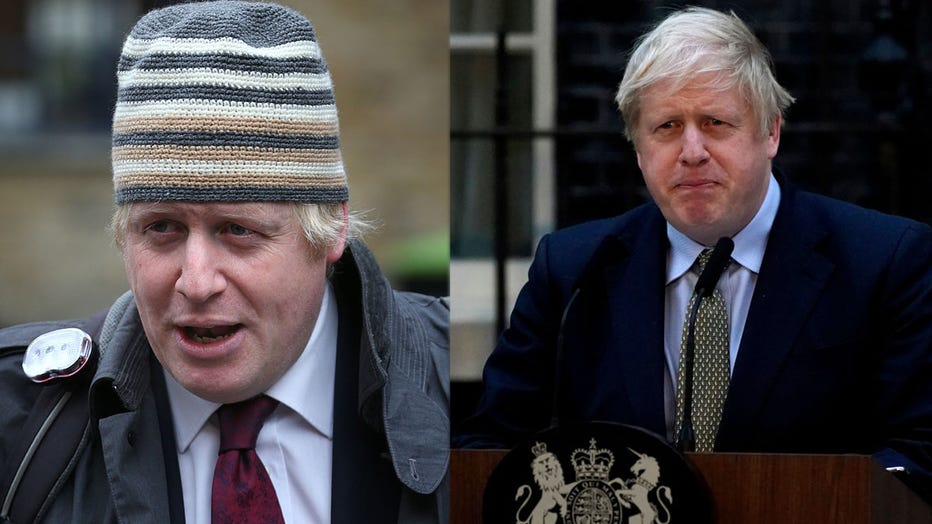 2016: Co-leader of the campaign to take Britain out of the European Union, in opposition to then-Prime Minister David Cameron, a fellow Conservative. Cameron resigns after voters approve Brexit in a national referendum on June 23, 2016.

2016-2018: Serves as Foreign Secretary under Cameron's successor, Prime Minister Theresa May. Johnson resigns in July 2018 in opposition to May’s strategy for a "soft" Brexit that would maintain close ties with the EU.

June 7, 2019: Theresa May resigns as Conservative Party leader over her failure to persuade Parliament to back the Brexit agreement she negotiated with the EU. The party is split between those who back May and hard-liners, led by Johnson, who are willing to risk a no-deal Brexit in order to wring concessions from the EU.

July 23, 2019: Johnson is elected Conservative Party leader in a vote by party members. He takes office as prime minister the next day, inheriting a minority government that relies on votes from Northern Ireland’s Democratic Unionist Party to pass legislation. Johnson insists Britain will leave the EU on Oct. 31, with or without a deal.

Aug. 28, 2019: Johnson announces he will shut down Parliament until mid-October, giving opponents less time to thwart a no-deal Brexit.

Sept. 3, 2019: Twenty-one rebel Conservative Party lawmakers support legislation requiring the government to seek an extension of Brexit negotiations if it can’t negotiate an agreement with the EU. The measure passes and the rebels are expelled from the party.

Sept. 5, 2019: Johnson asserts he would rather be "dead in a ditch" than ask the EU for another extension. 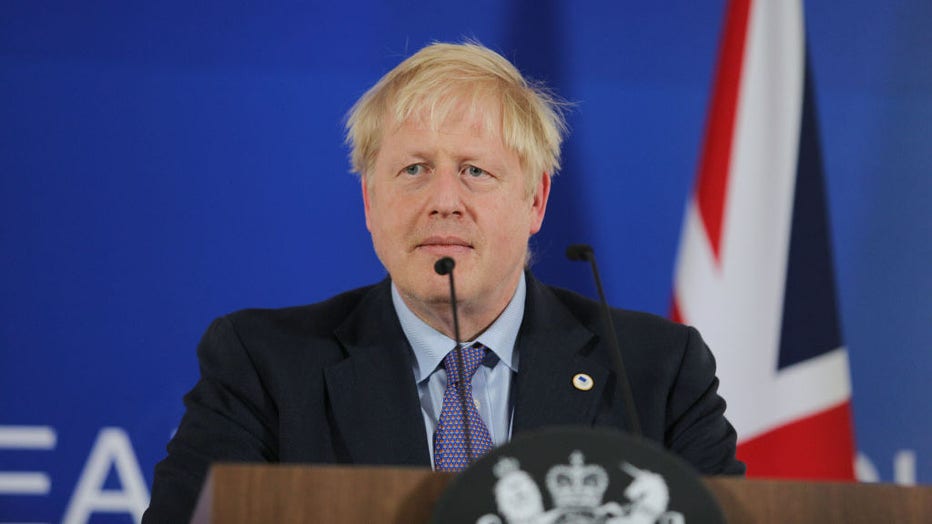 Boris Johnson, Prime Minister of the United Kingdom, speaks during a press conference in the Justus Lipsius building during the European Council Special Summit EU Leaders Meeting in Brussels, Belgium on Oct. 17, 2019. (Photo by Nicolas Economou/NurPh

Nov. 6, 2019: Parliament is dissolved and early elections are set for mid-December as Johnson seeks a mandate for his Brexit strategy.

Dec. 12, 2019: Johnson wins an 80-seat majority in the general election, giving him the backing to push through Brexit legislation. The victory makes Johnson the most electorally successful Conservative leader since Margaret Thatcher.

April 5, 2020: Johnson hospitalized and later moved to intensive care with COVID-19. He is released from the hospital on April 12, thanking the nurses who sat with him through the night to make sure he kept breathing.

Nov. 3-4, 2021: Johnson's government orders Conservative lawmakers to support a change in ethics rules to delay the suspension of Owen Paterson, a Johnson supporter who had been censured for breaching lobbying rules. The measure passes. A day later, facing an angry backlash from lawmakers of all parties, Johnson reverses course and allows lawmakers to vote on Paterson’s suspension. Paterson resigns.

Nov. 30, 2021: Allegations surface that government officials attended parties in government offices during November and December 2020 in violation of COVID-19 lockdown rules. The scandal grows to reports of more than a dozen parties. Johnson denies the allegations, but opposition leaders criticize the government for breaking the law as people across the country made sacrifices to combat the pandemic.

U.K. Prime Minister Boris Johnson apologized in parliament on Jan. 12, 2022, over a gathering held in the garden at Downing Street in May 2020 during a lockdown. Credit: Parliament TV via Storyful

April 9: Johnson meets Ukrainian President Volodymyr Zelenskyy in Kyiv, pledging a new package of military and economic support. The move helps bolster Johnson and his supporters, who argue the government should not focus on domestic political squabbles.

Johnson visited the war-torn country in a show of solidarity and pledged more support.

April 12: Johnson is fined 50 pounds ($63) for attending one of the lockdown parties. Opposition parties characterize him as the first U.K. prime minister in history shown to have broken the law while in office. Johnson apologizes but insists he didn’t know he was breaking the rules.

May 22: Findings of the "Partygate" investigation are published, detailing 16 gatherings at Johnson's home and office and other government offices between May 2020 and April 2021. The report details excessive drinking among some of Johnson's staff, at a time when millions of people were unable to see friends and family.

May 26: The government reverses course on its tax decision on oil and gas companies and announces plans for a 25% windfall profits levy.

June 6: Johnson narrowly wins a vote of no confidence, with Conservative lawmakers voting 211 to 148 to back him. But the scale of the revolt — some 41% voted against him — shakes his grip on power.

June 29: Parliament's cross-party Privileges Committee issues a call for evidence for a probe into whether Johnson misled Parliament over lockdown parties.

June 30: Chris Pincher resigns as Conservative deputy chief whip amid allegations he assaulted two guests at a private members’ club in London. Previous sexual misconduct allegations emerge about Pincher. Questions swirl about whether Johnson knew about the claims when Pincher was given the job.

July 5: Johnson apologizes for his handling of the Pincher scandal and says he had forgotten about being told of the allegations. Two of Johnson's most senior Cabinet ministers, Treasury chief Rishi Sunak and Health Secretary Sajid Javid, quit the government.