Police have identified more than 30 alleged members a group called Patriot Front who were found packed in the back of a U-Haul truck near an LGBTQ event in Coeur d’Alene, Idaho, Saturday. Authorities said the men had come from at least 11 different states, allegedly to riot at the North Idaho Pride Alliance’s Pride in the Park event, before a tipster reported seeing what looked like "a little army" filing into the vehicle at a hotel parking lot.

"To the white supremacists who ran through downtown today: When we march, we don't hide our faces. Your hate is as cowardly as it is disgusting, and it goes against all that Boston stands for," Wu wrote on Twitter.

The Patriot Front members had planned a surprise march for Saturday, according to the New York Post.

They flew colonial flags as well as banners from Benito Mussolini’s National Fascist Party. A skirmish quickly erupted between a Black man and multiple white supremacists. 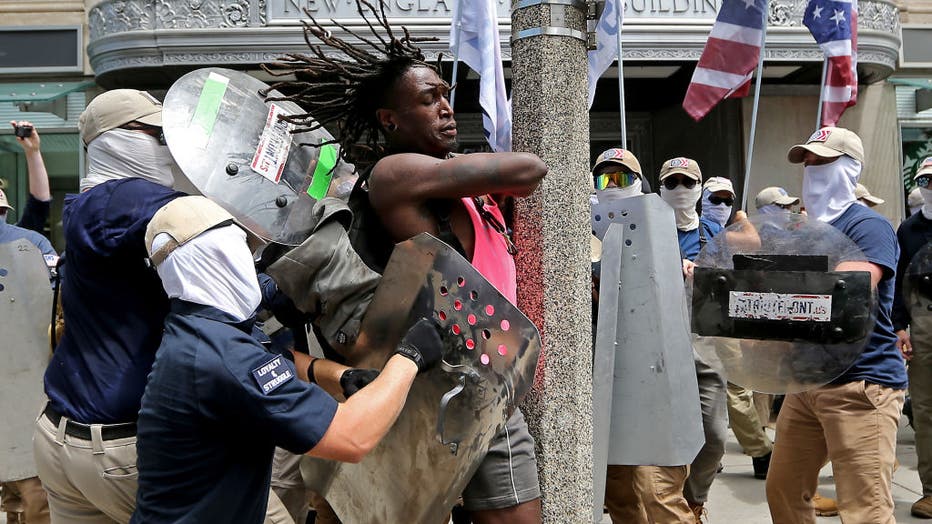 A fight breaks out as the white supremacist group, The Patriot Front marches thru the city of Boston on July 2, 2022 in , BOSTON, MA. (Staff Photo By Stuart Cahill/MediaNews Group/Boston Herald)

"Gross. Pretty sure the masks aren’t being worn for public health concerns," Louijeune wrote on Twitter.

"It is incumbent upon all of us to acknowledge, call out, and disavow the growing extremism and creeping hate in our country wherever we see it," Flynn wrote in a separate press release. "We must always stand with the Jewish community and our communities of color, educate our children about the horrors of the past so that history does not repeat itself, and make clear to all neo-Nazi and white supremacist groups that they are not welcome and will never represent our values."

Who are the Patriot Front?

The Anti-Defamation League describes Patriot Front as a Texas-based "white supremacist group whose members maintain that their ancestors conquered America and bequeathed it to them, and no one else."

Patriot Front is known for its online presence and for holding "flash demonstrations," unannounced rallies in which members march in khakis and blue or white shirts, often wearing masks, according to the ADL. Photos show that the suspects were wearing similar outfits when they were arrested.

Last month, the group of 31 men allegedly in the white supremacist group Patriot Front were arrested for conspiracy to riot at a gay pride event in Idaho.

According to Kootenai County prosecutors, Coeur d'Alene police officers believed that the 31 men, suspected of being part of a nationwide white supremacist group, intended to incite physical confrontation and cause disorder at the North Idaho Pride Alliance’s Pride in the Park event. Court documents obtained by FOX 13 say that the group had been strategizing this altercation for quite some time, with military-style drills and an outline of the operation.

On June 11, a concerned citizen called police saying a group of men, who looked "like a little army," were loading themselves into the cargo area of a U-Haul truck. The caller reported members of the group wearing similar clothing, masks, and even carrying riot shields. According to court documents, the identity of the caller will remain anonymous throughout the investigation, due to the group allegedly being part of Patriot Front, a white nationalist and neo-fascist hate group known for being violent.

Local law enforcement staffed extra personnel that day due to credible intelligence indicating there would be groups coming into town intending to seek out oppositional contact with other crowds gathered in downtown Coeur d'Alene. When the U-Haul carrying the group was stopped by authorities, multiple officers, troopers and SWAT officers responded as a safety concern, since there were more than 20 people in the truck.

FOX 13 Seattle contributed to this story. It was reported from Los Angeles.