KHIMKI, Russia - American basketball star Brittney Griner was back in court on Tuesday for her trial for cannabis possession amid U.S. diplomatic efforts to secure her release.

During the hearing, prosecutors called a state narcotics expert who analyzed cannabis found in Griner’s luggage. Her defense fielded a specialist who challenged the analysis, charging that it was flawed and didn’t conform to official rules.

Griner was escorted into court in handcuffs and placed inside a cage in the trial in Khimki, a town on the northern edge of Moscow. While in the cage she held up personal photos.

The trial adjourned until Thursday, when closing statements are scheduled.

If convicted, the Women’s National Basketball Association (WNBA) star and two-time Olympic gold medalist could face 10 years in prison. As her trial has progressed, the Biden administration has faced growing public pressure to get her released.

In an extraordinary move, U.S. Secretary of State Antony Blinken last week spoke to his Russian counterpart, Sergey Lavrov, urging him to accept a deal under which Griner and Paul Whelan, an American imprisoned in Russia on an espionage conviction, would go free.

The Lavrov-Blinken call marked the highest-level known contact between Washington and Moscow since Russia sent troops into Ukraine more than five months ago, the direct outreach at odds with U.S. efforts to isolate the Kremlin.

People familiar with the proposal say it envisions trading Griner and Whelan for the notorious arms trader Viktor Bout. It underlines the public pressure that the White House has faced to get Griner released. 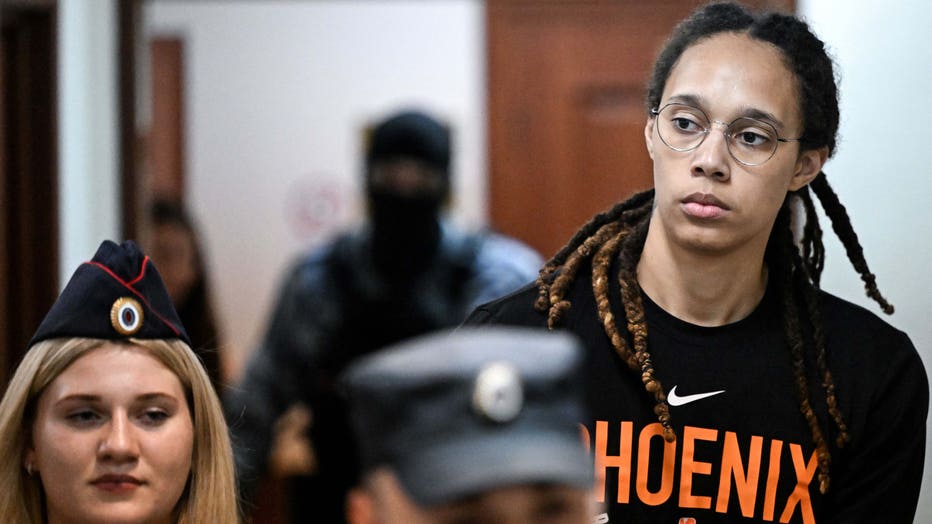 US WNBA basketball superstar Brittney Griner arrives to a hearing at the Khimki Court, outside Moscow on July 27, 2022. - Griner, a two-time Olympic gold medallist and WNBA champion, was detained at Moscow airport in February on charges of carrying i (Photo by KIRILL KUDRYAVTSEV/AFP via Getty Images)

White House Press Secretary Karine Jean-Pierre told reporters Monday that Russia has made a "bad faith" response to the U.S. government’s offer, a counteroffer that American officials don’t regard as serious. She declined to elaborate.

Griner has acknowledged there were vape canisters containing cannabis oil in her luggage when she was arrested at a Moscow airport in February. But she insisted that she had no criminal intent and that the canisters ended up in her luggage because she was packing hastily. Griner played for a Russian women’s basketball team in the WNBA off-season.

To bolster her case, her defense lawyers have presented testimony from doctors that she was prescribed cannabis as a treatment for pain. Medical marijuana treatment is not legal in Russia.

"There are a lot of factors that will [be] taken by the court into account," Griner’s attorney Maria Blagovolina told reporters after Tuesday’s hearing, adding that Griner "admitted that she did bring something, but we need to know what she did bring."

While judges have leeway to consider mitigating factors under Russian law, acquittals are rare and account for less than 1% of cases in Russian criminal prosecutions.

A conviction, however, could potentially pave the way for Griner’s exchange as Russian officials said it could only happen after the judicial process is completed.

Tom Firestone, a Washington attorney who formerly served as legal adviser at the U.S. Embassy in Moscow, said Griner could be handed a tough sentence as a way for Russians "to maximize their leverage in negotiations." He told The Associated Press that Russia "may want to let this play out a little bit longer and try to extract more concessions."

Russian officials have scoffed at U.S. statements about the case, saying they show a disrespect for Russian law. They remained poker-faced, urging Washington to discuss the issue through "quiet diplomacy without releases of speculative information."

"Any exchange of information on the subject should be discreet without any ‘loudspeaker diplomacy,’" he told reporters. "Public exchange of positions will not yield any result."

Eric Tucker in Washington and Vladimir Isachenkov in Moscow contributed to this report.

WNBA star Brittney Griner tried to call her wife nearly a dozen times through the American embassy in Russia on the couple’s fourth anniversary on June 18, but they never connected since the phone line at the embassy was not staffed, Cherelle Griner said.