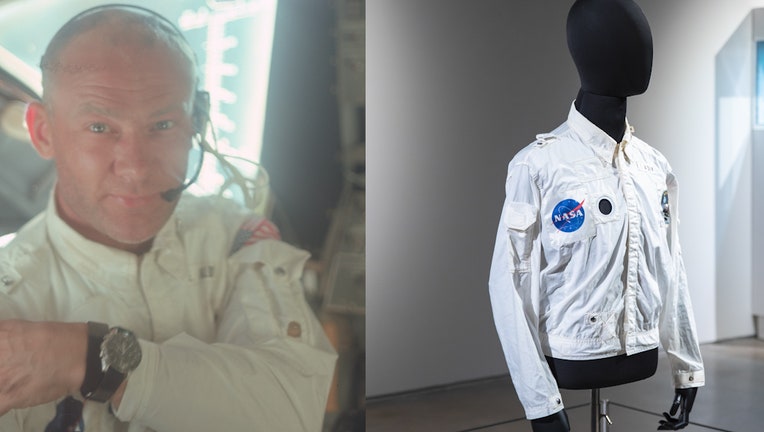 Buzz Aldrin and the jacket he wore on the Apollo 11 mission. (Credit: NASA)

NEW YORK - It may be one small item for man, but it’s a giant leap for space enthusiasts as Buzz Aldrin’s moon landing jacket and other artifacts will go up for auction.

Other artifacts from the Apollo 11 mission will include the broken circuit breaker switch that many believe would have ended the lives of the crew by stranding them in space. Aldrin’s felt-tip pin — used to ignite the engine in place of the broken switch, which possibly saved the crew — will also be up for auction, along with the missions’ activation checklist.

Items from Aldrin’s Gemini XII mission will also be a part of the auction, including the "Go Army Beat Navy" banner that he unveiled during the mission.

"This collection is a summation of my career as an astronaut, from my studies at West Point, to my first EVA during Gemini XII, to humankind’s first lunar landing on Apollo 11 where we planted the American flag, and a bit beyond," Aldrin said in a news release.

Several artifacts from Buzz Aldrin are up for auction.  (Sotheby's)

"After deep consideration, the time felt right to share these items with the world, which for many are
symbols of a historical moment, but for me have always remained personal mementos of a life dedicated to science and exploration," he continued.

The jacket is expected to go for $2 million at the auction, according to Sotheby’s. Aldrin wore the jacket on his historic mission to the moon and back. Considered a rare artifact, the jacket is the only flown garment from the Apollo 11 mission available for private ownership. Jackets belonging to Command Module Pilot Michael Collins and Mission Commander Neil Armstrong, who accompanied Aldrin, are housed at the Smithsonian along with their A7L pressure suits.

Aldrin’s jacket contains reinforced holes in the upper torso for medical connections to pass. It also contains Aldrin’s name printed above the Apollo 11 emblem along with the U.S. flag on the left shoulder.

Before the auction, the items will be available for public viewing at the Sotheby’s galleries on York Avenue in New York from July 21 to July 25.

Hundreds of millions tuned in to radios or watched the grainy black-and-white images on TV as Apollo 11′s Armstrong and Aldrin set foot on the moon on July 20, 1969, in one of humanity’s most glorious technological achievements. Police around the world reported crime came to a near halt that midsummer Sunday night.

Collins, who orbited the moon alone in the mother ship while Armstrong proclaimed for the ages, "That’s one small step for man, one giant leap for mankind," was struck by the banding together of Earth’s inhabitants.

Armstrong, who expertly steered the lunar module Eagle to a smooth landing with just seconds of fuel left, died in 2012 at 82. Collins died in April 2021.

This story was reported from Los Angeles. The Associated Press contributed.