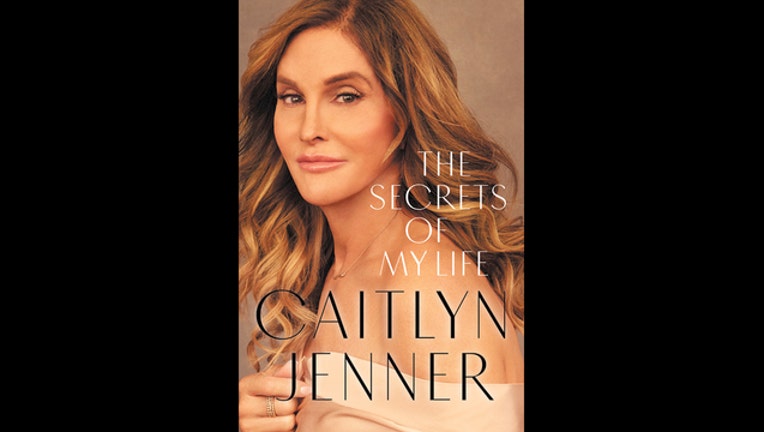 The cover of "The Secrets of My Life," a memoir by Caitlyn Jenner. (Grand Central Publishing)

NEW YORK (AP) - Caitlyn Jenner opened up Monday about her frank new memoir detailing her now 2-year-old transition and the bumps along the way, including her three failed marriages, thoughts of suicide while she was relentlessly pursued by paparazzi, and, finally, freedom to be her true self.

And, yes, contrary to the thoughts of many in the trans community, she uses her former name, Bruce, in the book, "The Secrets of My Life," out this week. And, yes, she describes her liberating, below-the-belt gender reassignment surgery - "The Final Surgery" as she calls it - on the very last page, insisting it's the last word for her about that.

And yes, she takes on, briefly, her conservative political views when it comes to President Donald Trump and issues like less government, but not so on issues important to the LGBTQ community as a whole, such as same-sex marriage.

Why go to any of these places to begin with months after her formal coming out interview with Diana Sawyer on ABC, watched by 17.1 million viewers, then on the cover of Vanity Fair, and finally her now-canceled reality show on E! Entertainment, "I Am Cait," where she went on the road with fellow members of the trans community.

"I needed to pour my heart out on everything," the 67-year-old Jenner told The Associated Press of the book. "What I was trying to accomplish is, one, get it all out for myself, so there was no other secrets left, but two, it was the way I dealt with my stuff."

The book, co-written by Buzz Bissinger (he wrote the Vanity Fair story), has already brought on bitter, hurt tears from Jenner's third wife, Kris Jenner, whose closet Caitlyn once regularly raided as she stole moments to cross dress while struggling with her gender identity. They are moments, Caitlyn said, that Kris was well aware of before "I made love to her" after the two met in 1990.

"To be honest with you I haven't even talked to her about it," Jenner said of Kris' reaction to the book.

There were many dark times for the Olympic gold-medal winning decathlete as he went about hiding his gender struggles, including a false start in transitioning in the 1980s.

Jenner took hormones, then balked at that time, but her enlarged breasts did not disappear after the treatments stopped, requiring liposuction as she continued living as a man.

There was one moment in particular, years later, that took Jenner to the ultimate dark place, suicide. The celebrity news site TMZ distributed a photo of a disheveled Jenner emerging from a doctor's office after a procedure to have her trachea shaved so she could appear more like a woman. This was before Diane Sawyer and her formal coming out, and it felt like a painful, forced outing.

"It got to the point where I thought, you know what, I know the easy way out," Jenner said. "I got a gun in the house. ... But then the next day I thought, wouldn't that be the stupidest thing you've ever done, to silence your voice? You have the opportunity here to really make a difference, to live your life honestly."

Jenner has spent much of the last two years learning from the trans community from a vantage point of white, wealthy privilege that she fully acknowledges in the book, and trying to make amends with her huge family, including six children and four Kardashian stepchildren.

But two family members, Jenner's younger brother who died years ago in a car accident, and Jenner's late father, will never know her secrets.

"He was a good man. We were very close," she said of her dad. "He was very proud of Bruce and the things that I was accomplishing in my life, and especially the Games and everything. ... I think it would have been very difficult for him, just like it would be difficult for me."

Jenner dedicates the book, from Grand Central Publishing, to her father and brother. As for his dad likely not understanding, that's OK, she said.

"Somebody asked me the question the other day, what if Kendall came up to you and said that she was trans and wanted to transition into a guy, and I went, achhhh, my little angel, you know, my cute little girl. That's tough for a parent. I get that," Jenner said of daughter and model Kendall Jenner.

Life these days is good. Better than good, Jenner said, though she looks forward to the day where she isn't thinking about her gender every second of every day.

"I am extraordinarily comfortable with myself," she said. "But I haven't quite got there. ... My life is so simple now. I just get up, be myself, get ready, go out, do my thing. I'm very motivated so, yeah, it's all good.