California to raise its gas tax, already the highest in the nation

Stop us if you've heard this before -- California drivers will once again feel (more) pain at the pump.

LOS ANGELES - California's gas prices hit a new record-high on Tuesday, as the state continues to have the highest average gas prices in the United States, according to AAA.

Gas prices in California hit a new average record of $6.02 a gallon, and they’re set to go even higher on July 1st when California’s gas tax increases again.

The city of San Rafael in Northern California recorded the highest average price in the state, with a gallon of self-serve regular gasoline costing drivers on average $6.27.

The average price of a gallon of self-serve regular gasoline in Orange County rose to a record Tuesday while the Los Angeles County average price moved to within four-tenths of a cent of the record.

The Orange County average price rose 3.6 cents to $6.049, erasing the previous record of $6.029 set March 29, according to figures from the AAA and Oil Price Information Service. It has increased 19 of the past 20 days, rising 33.8 cents, including 1.6 cents Monday.

The Orange County average price is 21.5 cents more than one week ago, 28.7 cents higher than one month ago and $1.921 greater than one year ago.

The Los Angeles County average price is 17.6 cents more than one week ago, 26 cents higher than one month ago and $1.892 greater than one year ago.

In the Bay Area, Marin County has the highest county average. Drivers there pay $6.27 per gallon, according to AAA. San Francisco follows closely behind with an average price of $6.26. The average price is also above $6.20 in Napa, San Mateo and Sonoma counties, the figures from AAA show. 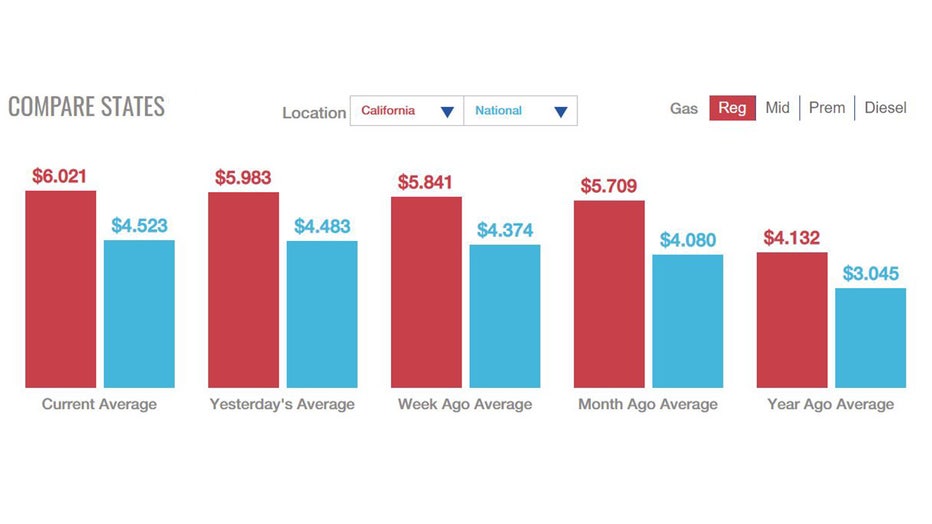 Average price of a gallon of self-serve regular gasoline in California compared to the national average. (Credit: AAA)

The rising pump prices are the result of the high cost of oil, according to Andrew Gross, an AAA national public relations manager. The price of a barrel of July Brent crude on ICE Futures Europe rose for the third time in four sessions, increasing $2.69 to settle at $114.24.

Brent crude is the global oil benchmark, accounting for approximately 80% of the world's crude oil.

Crude oil costs account for slightly more than half of the pump price, according to the U.S. Energy Information Administration. The rest of the price includes the other components of gasoline, production costs, distribution costs, overhead costs for all involved in production, distribution and sales, taxes and carbon offset fees in California paid by the refineries.