A refugee who served a 25-year-sentence at San Quentin Prison is now slated to be deported back to Cambodia, despite the pleas of activists who say he has changed his life for the better and doesn't even have memories of the homeland he fled as a child.

SAN QUENTIN, Calif. - A refugee who served a 25-year-sentence at San Quentin Prison is now slated to be deported back to Cambodia, despite the pleas of activists who say he has changed his life for the better and doesn't even have memories of the homeland he fled as a child.

Phoeun You, 47, could be deported any day.

"I have anxiety and fear," You said Wednesday in a phone call from the Mesa Verde ICE Processing Facility in Bakersfield. "I'm waking into the unknown. All my family is here."

As he is stuck in detention, friends like Borey "Peejay" Ai are now working with the Asian Prisoner Support Committee to fight for You's release.

"I know him personally," Ai said. "He's a longtime friend. I have watched him mentor other people. He has dedicated his life to helping people and being held accountable."

The Asian Prison Support Committee and others are now trying to highlight You's story, putting pressure on Gov. Gavin Newsom to pardon him and the California Department of Corrections to stop ICE transfers.

It's not clear their efforts will work.

Despite California being a sanctuary state, the prison system is not exempt from cooperating with ICE.

In addition, You was convicted of murder, which also makes his case exempt from sanctuary status.

A bill called the VISION Act, which would have made You eligible to return home before being deported to give him time to find a lawyer did not pass the Legislature last year. The bill remains eligible for a vote on the Senate floor this year.

A spokesperson from Newsom's office sent an email that stated pardon applications are confidential. However, in general, the statement said that the governor "regards clemency as an important part of the criminal justice system and all applications receive a thorough and careful review."

CDCR spokeswoman Dana Simas stated in an email that You was released on Jan. 5 and is no longer in prison custody. She declined to state any more than that.

You is one of many refugees and undocumented immigrants who have experienced what advocates call "double punishment:" direct transfer to ICE and eventual deportation immediately after finishing a prison sentence, even if they have permanent residency in the U.S.

In 2020, 1,615 immigrants or refugees in California’s prison system were transferred by ICE.

Even though You's fate seems sealed, his friends and activists want the public to know his full story and show that he is a changed man.

Phoeun You tells his own story

You became a journalist during his confinement in  San Quentin and wrote his own story, now being disseminated by the prisoner support group.

As he tells it, You was born in 1975, shortly before the Cambodian genocide and the take-over of the Khmer Rouge.

When he was 4 years old, his family escaped and found a refugee camp in Thailand.

He and his family resettled in Ogden, Utah. They lived there for about five years and then moved to Long Beach, Calif., to be closer to other Cambodian communities in 1985. 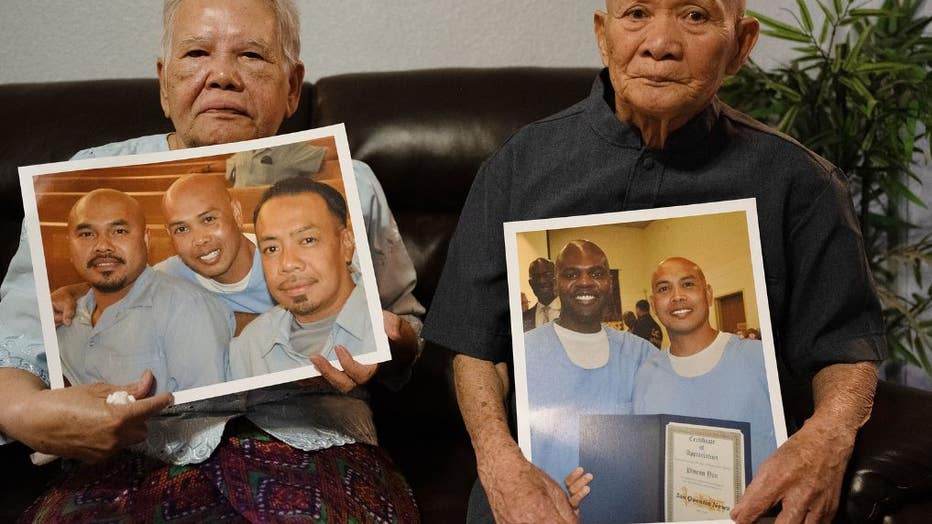 Siblings Paul You, left, and Nikki Bunyou pose for a portrait holding a photo of their brother Phoeun You on April 5, 2022 in Las Vegas, Nevada. You is currently in ICE detention. Photo by Bridget Bennett | Survival Media Agency

He struggled as a kid.

Like many Southeast Asian refugee youth around him, he was bullied at school. He was targeted by other kids, resulting in constant fighting and violence. For a sense of belonging and protection, he said he joined a gang at 13 years old.

He also had nine other siblings and lived in a 15-person household and constantly faced housing and food insecurity.

He said that his family was forced to move out from one home to another due to the high cost of living.

You and his family also struggled with the trauma from surviving war and genocide with no culturally competent resources. He said he began abusing drugs and alcohol.

When he turned 16, his brother was shot eight times in a gang shooting. That was an emotional turning point for him.

He ended up moving to Las Vegas to live with his uncle.

At 18, he graduated from high school and started work as a game operator in a casino.

In 1993, he moved back to California to reconnect with his family.

One day in 1995, You said he stood outside his nephew’s school waiting to pick him up.

A car rushed towards him and about six gang members came out throwing punches.

You said this triggered memories of almost losing his brother to gang violence and his own experience of being bullied as a child.

He and his nephew – both of whom were punched – searched for the rival gang members to confront them.

After hours of driving, You said he opened fire into a crowd. He killed a 17-year-old in March 1995.

You was arrested and convicted of first-degree murder and sentenced to 35 years to life.

In 2007, You was transferred to San Quentin State Prison, where he said he decided to channel his grief into his healing and growth.

He worked as a layout designer and writer for San Quentin News and joined the Society of Professional Journalists.

Being a journalist taught You to contextualize his experience while holding himself accountable to choices he’s made and their consequences.

He and some peers became a founding member of ROOTS, or Restoring Our Original True Selves,, a self-help program that connects prisoners to their history and culture through education and restorative justice programs.

He became an alumnus with the Last Mile, an entrepreneurship program that combines technology and business. He learned how to work with sheet metal.

He became certified as a counselor by Bay Area Women Against Rape.

In 2015, You graduated with an AA degree from Patten University.

Last August, You qualified for a parole hearing because he was incarcerated at a young age, and was recommended for early release by the Board of Parole Hearings.

If he were an American citizen, he would have simply been released after his prison term.

But because he is a Cambodian citizen and convicted of a violent crime, his deportation is likely imminent.

You has accepted this and even though he is scared, also said that he feels like he can face the new chapter in his life because he will at least be free, even if he is far away from his family in California.

Even so, You's supporters aren't giving up. They're still writing the governor and they're still hoping to change the law.

"I'm very hopeful," said Bun from the Asian Law Caucus. "I have to live on hope."