Carlos Santana collapses on stage during show at Pine Knob

Santana was 40 minutes into his set at the time of his collapse, according to witness Lori Pinson, a meteorologist at FOX 2. He was then treated onstage by EMS personnel. People who attended the concert said that he waved when he was taken off-stage.

The crowd was told on the loudspeaker that the concert was canceled and was asked to pray for him because of a serious medical issue.

Santana was a couple minutes into a new song titled "Joy" when the incident happened, Pinson said. 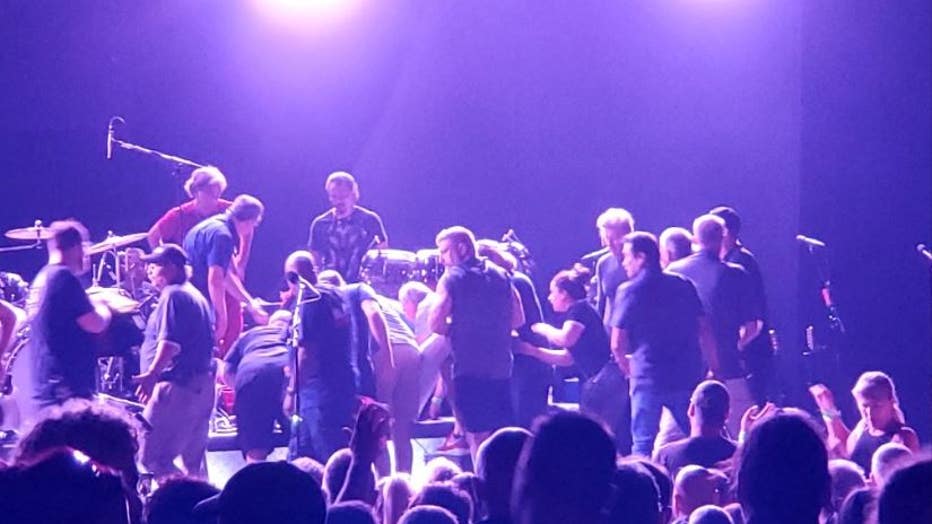 "Suddenly the music just died down. I didn't see him collapse on stage, but everyone had him off to the side," she said. "Suddenly a chair appeared where there was not one before. The medics began to rush up on stage.

Concerned concert-goers are lingering at their seats hoping for a glimpse of the singer and guitarist, or hoping for an update on his condition.

Witness and former Detroit Free Press journalist Jo-Ann Barnas tweeted about the state of shock for those in the audience.

"They just told us to leave the venue, but so many are still here, stunned, looking at a near empty stage at Pine Knob, Clarkston Mi," she wrote. "Santana was about 1 minute into a song he had collaborated with Chris Stapleton. Carlos was calling for healing and joy."

Santana, 74, had played a number of hits and appeared to be in good spirits during the show at the outdoor theater.

"He played all the originals everyone loves like 'Black Magic Woman,'" Pinson said. "He was making several statements on the state of the world, all positive. He was telling us about a new song that he had collaborated with Chris Stapleton saying he wanted to write a song that heals the world, titled Joy."

Stay with FOX 2 for more information as it becomes available.