WASHINGTON - Former President Donald Trump fought security officials for control of the presidential SUV as he struggled to get to the Capitol during the Jan. 6, 2021, insurrection, a key former White House aide told House investigators Tuesday, even after he had been told that some of his supporters were armed.

Trump had said that the protesters were "not here to hurt me," recalled Cassidy Hutchinson, testifying before the House panel investigating the insurrection. Told by security officials that it wasn’t safe to go to the Capitol after he addressed his supporters, Trump lunged toward the steering wheel of the armored vehicle, she said.

The 25-year-old former aide said she was told of the altercation in the SUV — dubbed "The Beast" — immediately afterward by White House security officials, and that Bobby Engel, the head of the detail, was in the room and didn’t dispute the account. Engel had grabbed Trump’s arm to prevent him from gaining control of the armored vehicle, she was told, and Trump then used his free hand to lunge at Engel.

Cassidy Hutchinson relates what she was told about how the president supposedly tried to grab the wheel of the limo, the lunged at his security detail.

Hutchinson, then a special assistant to White House chief of staff Mark Meadows, described chaos inside and outside the White House that day as hundreds of Trump’s supporters marched toward the Capitol, shouting the president’s false claims of widespread fraud in the 2020 election. Aides inside the executive mansion — several of whom had been warned of violence beforehand — became increasingly alarmed as rioters at the Capitol overran police, broke through windows and doors and interrupted the certification of Joe Biden’s victory.

Trump was less concerned, even as he heard there were cries in the crowd to "hang Mike Pence!" Hutchinson recalled that Meadows told aides that Trump "thinks Mike deserves it." The president tweeted during the attack that Pence didn’t have the courage to object to Biden’s win as he presided over the joint session of Congress.

As for the rioters, Meadows said, Trump "doesn’t think they’re doing anything wrong."

Hutchinson told the panel the former president had been informed early in the day that some of the protesters in the crowd outside the White House had weapons, but he told officials to remove metal detectors to "let my people in" and march to the Capitol.

Hutchinson’s explosive testimony – featured in a surprise hearing announced just 24 hours earlier -- came at the latest of the sessions the House committee investigating the Capitol insurrection is conducting to inform the public about what happened as Trump's supporters broke into the Capitol and sent lawmakers running from the House and Senate.

"As an American I was disgusted," Hutchinson told the committee, reacting to Trump’s tweet about Pence. "It was unpatriotic, it was un-American, and you were watching the Capitol building get defaced over a lie."

"I still struggle to work through the emotions of that," she said.

Former President Donald Trump was furious on Jan. 6 that armed supporters were not being allowed into the White House Ellipse for his speech leading up to the Capitol riot. The Jan. 6 House Committee investigating the Capitol riot called Cassidy Hutchinson, a former aide to chief of staff Mark Meadows, who testified that Trump ordered the magnetometers removed so that his supporters would be allowed in and suggested that they then should march to the Capitol from there.

Members of the panel praised Hutchinson’s bravery for testifying and said that some witnesses had been intimidated not to cooperate.

"I want all Americans to know that what Ms. Hutchinson has done today is not easy," said Wyoming Rep. Liz Cheney, a Republican who led questioning at the hearing.

Trump denied much of what Hutchinson said on his social media platform, Truth Social, including that he tried to grab the steering wheel of the presidential SUV or that he said Mike Pence deserved to be hung. "I hardly know who this person, Cassidy Hutchinson, is," Trump wrote, calling her a "total phony" and "bad news."

Hutchinson depicted a president flailing in anger and prone to violent outbursts as the window to overturn his election loss closed. Some aides sought to rein in his impulses. Some did not.

RELATED: January 6 hearings: What to know, where to watch Thursday’s Jan. 6 committee hearing

At one point, Hutchinson said, White House Counsel Pat Cipollone barreled down the hallway and confronted Meadows about the fact that rioters had breached the Capitol. Meadows, staring at his phone, told the White House lawyer that Trump didn’t want to do anything. An exasperated Cipollone said that blood would be on Meadows’ hands if nothing was done, she said.

Earlier, Cipollone had worried out loud that "we're going to get charged with every crime imaginable" if Trump went to the Capitol as the mob of his supporters was breaking in. But there were conversations about him "going into the House chamber at one point," Hutchinson said.

'There was ketchup dripping down the wall'

Former White House aide Cassidy Hutchinson testifies about an alleged tantrum by the president in which he threw his lunch at the wall, a display she said was not uncommon.

Hutchinson quoted Trump as directing his staff, in profane terms, to take away the metal-detecting magnetometers that he thought would slow down supporters who were gathering for his speech that morning on the Ellipse, in back of the White House. In a clip of an earlier closed-door interview with the committee, she recalled the president saying words to the effect of: ""I don’t f-in' care that they have weapons."

Before the crowd left for the Capitol, Hutchinson said she received an angry call from House Republican leader Kevin McCarthy, who had just heard the president say he was coming. "Don’t come up here," McCarthy told her, before hanging up.

In the days before the attack, Hutchinson said she was "scared, and nervous for what could happen" after conversations with Trump lawyer Rudy Giuliani, Meadows and others.

Meadows told Hutchinson that "things might get real, real bad," she said. Giuliani told her it was going to be "a great day" and "we’re going to the Capitol."

Hutchinson separately described a December 2020 conversation with John Ratcliffe, then the Trump administration’s director of national intelligence and a former Republican official. She said that Ratcliffe "didn’t want much to do" with the post-election period and was worried that the events could be harmful to Trump’s legacy and to democracy.

As a White House insider, Hutchinson told stories of a raging president who was unable to acknowledge his defeat. At the beginning of December, she said, she heard noise inside the White House around the time an Associated Press article was published in which Attorney General William Barr said the Justice Department had not found evidence of voter fraud that could have affected the election outcome.

New video of the Capitol Riot, including alleged crimes by the Proud Boys and others, shown at the congressional hearing on June 9. This version includes some censored profanity.

She said she entered a room and noticed ketchup dripping down a wall and broken porcelain. The president, it turned out, had thrown his lunch at the wall in disgust over the article and she was urged to steer clear of him.

He denied that, too, on Tuesday.

Hutchinson had already provided a trove of information to congressional investigators and had sat for four interviews with the panel behind closed doors, detailing meetings in the runup to the insurrection where challenges to the election were debated and discussed, including with several Republican lawmakers.

The panel has held five hearings so far, mostly laying out Trump's post-election pressure on various government institutions in the weeks leading up to the Jan. 6 joint session of Congress. 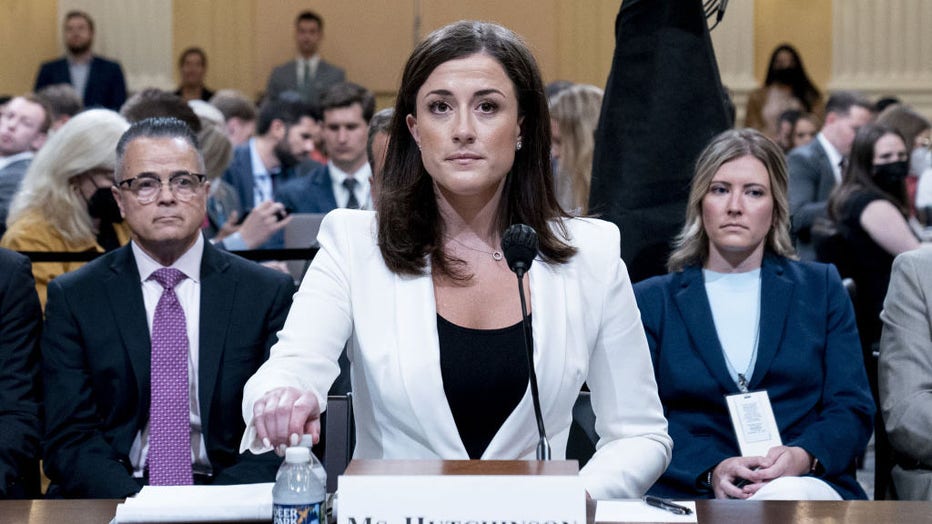 Cassidy Hutchinson, former aide to then White House chief of staff Mark Meadows, arrives for a hearing of the Select Committee to Investigate the January 6th Attack on the US Capitol in Washington, D.C., US, on Tuesday, June 28, 2022. Photographer: A

The committee has used the hearings to detail that pressure from Trump and his allies on Pence, on the states that were certifying Biden's win, and on the Justice Department. The panel has used live interviews, video testimony of its private witness interviews and footage of the attack to detail what it has learned.

Lawmakers said last week that two July hearings would focus on domestic extremists who breached the Capitol that day and on what Trump was doing as the violence unfolded.