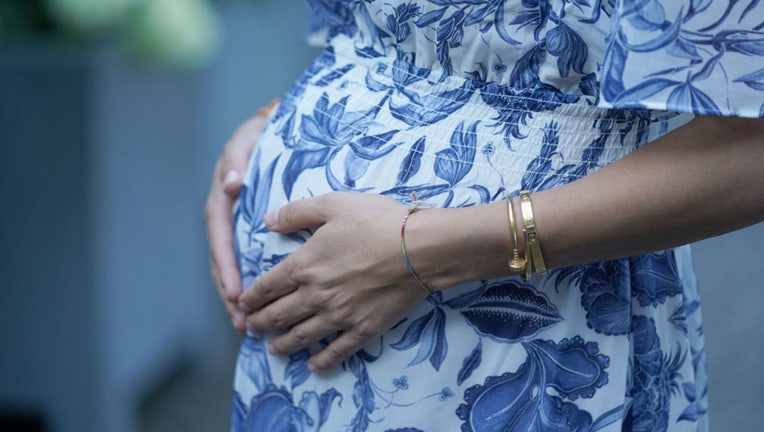 FILE - A pregnant woman holds her hands on her stomach. (Marcus Brandt/picture alliance via Getty Images)

Four in five pregnancy-related deaths could have been prevented, according to a new report released by the U.S. Centers for Disease Control and Prevention.

The CDC’s report observed data collected by the Maternal Mortality Review Information Application (MMRIA, or "Maria") across 36 U.S. states between 2017 and 2019.

MMRIA is a database set up for health care systems to report on maternal mortality, the CDC website states.

"The report paints a much clearer picture of pregnancy-related deaths in this country," said Wanda Barfield, M.D., M.P.H., director of CDC’s Division of Reproductive Health at the National Center for Chronic Disease Prevention and Health Promotion. "The majority of pregnancy-related deaths were preventable, highlighting the need for quality improvement initiatives in states, hospitals, and communities that ensure all people who are pregnant or postpartum get the right care at the right time."

Of the data that provided information on timing for pregnancy-related deaths, 22% of deaths occurred during pregnancy, 25% occurred on the day of delivery or within seven days after, and 53% occurred between seven days to one year after pregnancy.

Suicide and homicide were also considered as causes of death but data on either or both were not provided for every reported case.

Race and ethnicity play a part

American Indians or Alaska Natives (AI/AN) were disproportionately impacted, according to a second report published by the CDC.

Of the data collected by those who identified as AI/AN, mental health conditions and hemorrhage were the most common causes of death, accounting for 50% of deaths with a known underlying cause.

Most pregnancy-related deaths of AI/AN people (93%) were determined to be preventable. About 64% of deaths occurred between seven days to one year after pregnancy, the CDC said.

More than half of the deaths in the CDC’s report happened up to one year after the baby was born.

The CDC stressed it is imperative that health care providers and systems keep track of "whether their patient is pregnant or has been pregnant in the last year to inform diagnosis and treatment decisions."

"Healthcare systems, communities, families, and other support systems need to be aware of the serious pregnancy-related complications that can happen during and after pregnancy. Listen to the concerns of people who are pregnant and have been pregnant during the last year and help them get the care they need," the CDC said.