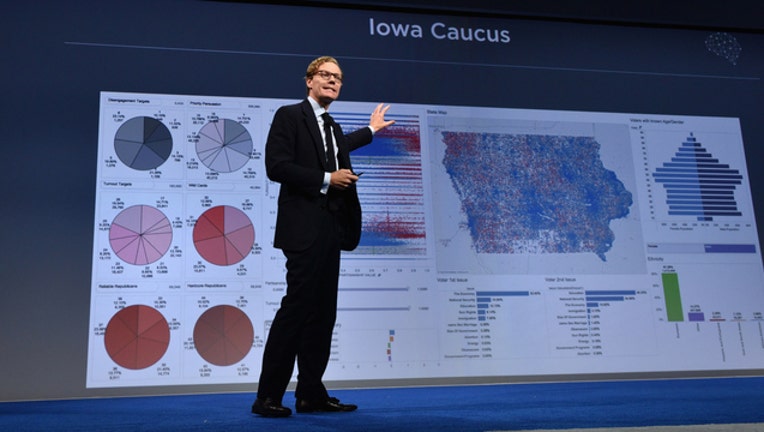 "We did all the research, all the data, all the analytics, all the targeting. We ran all the digital campaign, the television campaign and our data informed all the strategy," Alexander Nix said during a secretly recorded meeting with the undercover Channel 4 News reporter.

"In the view of the Board, Mr. Nix’s recent comments secretly recorded by Channel 4 and other allegations do not represent the values or operations of the firm and his suspension reflects the seriousness with which we view this violation," read the statement.

British officials are investigating Cambridge Analytica for its handling of personal data. The company has denied wrongdoing.

The Channel 4 reporter posed as a wealthy potential client interested in hiring Cambridge Analytica to influence campaigns in Sri Lanka. Nix claimed to have met Trump "many times," but did not provide details.

As part of a sales pitch, Nix said the firm sent emails with a "self-destruct timer" during the Trump campaign to make its role more difficult to trace.

"So you send them and after they've been read, two hours later, they disappear," the broadcaster recorded him saying. "There's no evidence, there's no paper trail, there's nothing."

He also said U.S. officials would not investigate his foreign clients because "they have no jurisdiction."

In another segment from its undercover investigation broadcast Monday, Channel 4 News showed Nix suggesting the company could tarnish political rivals by offering them large amounts of money or tempting them into compromising sexual situations. He suggested incriminating videos could be posted on the internet.

He responded by saying he was the victim of media harassment and has denied misleading British authorities or inappropriate information.

Channel 4 also quoted Mark Turnbull, another senior figure at Cambridge Analytica, as saying the company could create "proxy organizations" to feed negative material about opposition candidates onto the internet and social media.

Turnball said "charities or activist groups" were useful for such a purpose. The unflattering material could be spread through the internet, but without branding or other identifiers that could be traced back Cambridge Analytica.

The company said it has complied with all regulations and is cooperating with British information officials.