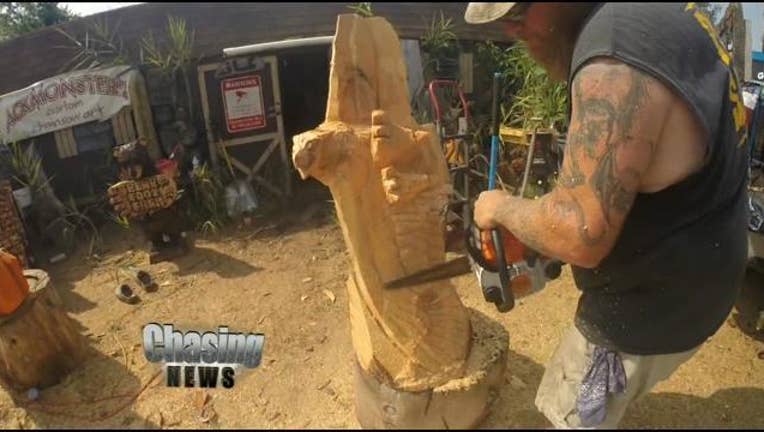 The nationally renowned artist, Brian "Ackmonster" Ackley is not your normal artist.

His canvas?  Huge chunks of wood and logs.

His work is truly phenomena, it’s amazing what this guy can do with a chainsaw.

Now, you would think that people would be wary of stealing from a man whose main tool in life is a chainsaw, but that's exactly what happened last week.

All of Ackmonster's chainsaws were stolen right out of his work shed, which sits only 100 yards from his home.

“They took my sledgehammer and took the lock and smashed it, off came the lock, and in they go,” Ackmonster explained.

A total of ten chainsaws were taken, which come out to be worth around $5k- $7K.

To make it worse, he was just days away from doing a demonstration tour down the East Coast demonstrating his skills.

The silver lining here is that, to Ackmonster's surprise, this story went viral.

The community rallied around him and started donating money and even chainsaws to him so he could continue to work.  He was blown away and totally humbled.

“I’m kind of like the Grinch that my heart was very small and now it’s 3 sizes too big, it kind of restored my faith in humanity, and there are good people out there and they need to be recognized for being good people,” Ackmonster stated.

Bridgeton police said they have no leads as of now, but there seems to be a band of thieves in the area.