Authorities say two people are in custody in connection to last Saturday's mass shooting on South Street that left three people dead and injured nearly a dozen. FOX 29's Kelly Rule has the latest update on the suspects taken into custody.

It's believed that Garner fired down South Street when a fight between three men turned into a shootout. Authorities say shortly before midnight, 34-year-old Gregory Jackson and two other men engaged in a heated conversation that quickly turned violent.

Police say both Jackson and another man involved in the fracas, later identified as Micah Towns, were both armed. Jackson is believed to have fired the first shot that injured Towns, who returned fire and killed Jackson.

Officials said Towns is not currently facing charges because he acted in self-defense. Both men were legally licensed to carry and exchanged 17 rounds, according to investigators.

When Garner began firing down South Street, investigators believe the initial brawl was over and Jackson had been down for about 30 seconds. Philadelphia Assistant DA Joanne Pescatore said Philadelphia police officers confronted Garner, who then pointed the gun in their direction.

One of the officers fired at Garner multiple times, striking him in the hand. According to authorities, Garner dropped a ghost gun with an extended magazine and fled on foot.

Pescatore says Garner ran toward 4th and Bainbridge where police were investigating a separate shooting that occurred earlier in the evening. There, Garner approached officers and informed them that he had been shot. He was transported to Thomas Jefferson University Hospital by police.

Hours later, the Philadelphia Police Department said a second suspect involved in the deadly shooting was taken into custody by U.S. Marshal's in South Philadelphia.

Rashaan Vareen was arrested on the 2300 block of South Hemberger Street around 8 p.m., according to authorities. FOX 29's Kelly Rule reports that law enforcement was tipped off to Vareen's whereabouts.

Vareen faces charges of attempted murder, aggravated assault, conspiracy and related offenses. Law enforcement sources believe that Vareen was a friend of Jackson's and the third person involved in the brawl that turned deadly.

Authorities believe that Vareen picked up Jackson's gun after he was killed and gave it to another man in a blue hooded sweatshirt who then fled the scene. 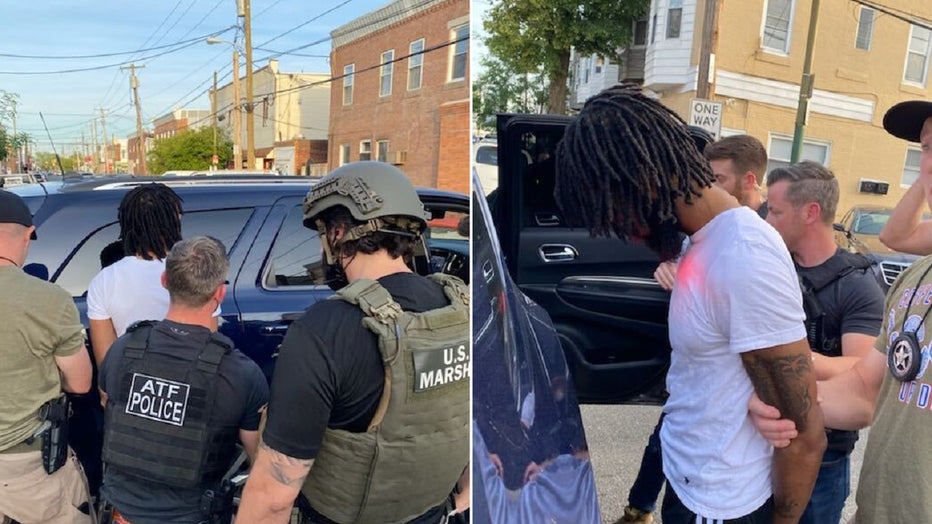 It's believe that Vareen remained by Jackson's side, putting pressure on his wound, before providing police with his name and identifying himself as a friend of Jackson’s.

In all, 14 people suffered gunshot wounds in the incident, and three people died. Officials have identified the other deceased victims as Kristopher Minners, 22, Alexis Quinn, 27. Both are believed to have been innocent bystanders, according to police.

Surveillance footage showed a fight erupt before the shooting that killed three people.

As of Monday night, no murder charges have been filed against anyone authorities believe may have been involved in the incident. Philadelphia Police Commissioner Danielle Outlaw shared a statement moments after Vareen's arrest.

"I’d like to thank our PPD investigators, The ATF, The FBI, and the United States Marshal’s Service for their swift and diligent work in identifying and apprehending two individuals wanted in connection to the horrific shooting incident that occurred Saturday evening on South Street," Outlaw said.

"That being said, there is still more work to do. The PPD will continue to work with all of our law enforcement and community partners to identify and apprehend each and every individual responsible for these heinous crimes."

A law enforcement source told FOX 29's Kelly Rule that that authorities are looking for at least two other shooters, including one who fired a .40 caliber gun. They believe that shooter is responsible for fatally shooting Quinn.