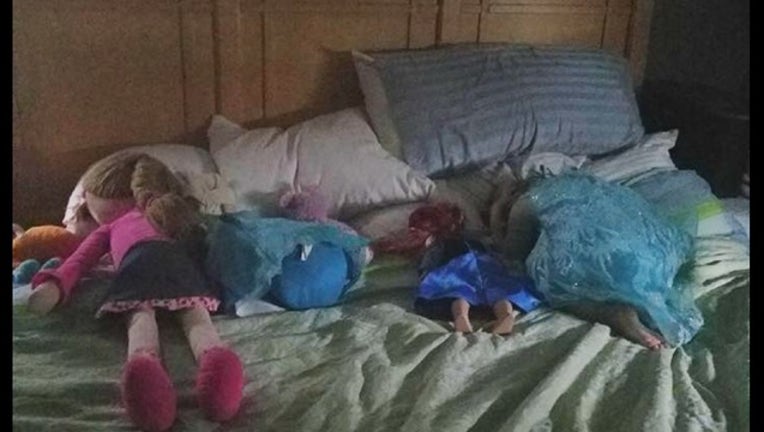 NASHVILLE, Tenn. (KTVU) - "This is not what pretend for a 5 year old should look like!!!" wrote a Tennessee mother who looked on in shock as her daughter practiced an active shooter drill during play-time with her dolls.

Sherry Hollands described the moment as her daughter Tellie brought all of her dollies into a bed, lined them up face down, turned off the lights and locked the door. In a photo the mother posted on Facebook, the little girl is seen on the bed next to her dolls, curled up, with her arms and legs tucked in.

When the mother asked the child what she was doing, the little girl explained that she was practicing her drills and told her, "'You have to be quiet this is what we do at school.'"

Hollands told KTVU it was heartbreaking. "It made me weak in the knees and took my breath a little. At 10 o'clock on a Saturday morning, this is not how a 5-year-old should be playing," Hollands said.

The mother of five posted the image on Saturday, when hundreds of thousands of people across the nation took to the streets for the March for Our Lives rallies demanding action to end gun violence.

Hollands said that because her husband was working, she wasn't able to participate in the protests but expressed her gratitude to those who did.

"For all of you out there, THANK YOU!" Hollands wrote in her post. "March on people. We can't do enough to protect our kids," she said.

The mother said her daughter, who is in pre-kindergarten, had just practiced the shooter drill last week  when her school had gone into lock-down because some teenagers had snuck onto the campus.

Hollands noted that sadly, these types of drills and responses are now the new norm for children.