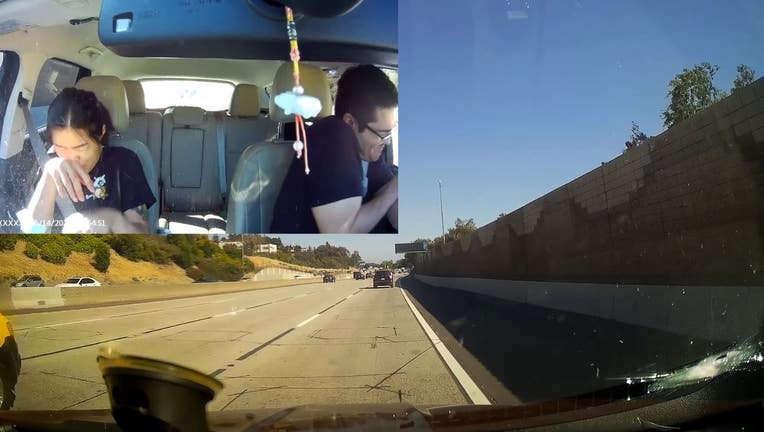 A couple reacts to the moment their car's window is shattered in apparent Bay Area freeway shooting. CHP is investigating.

OAKLAND, Calif. - California Highway Patrol is investigating an apparent freeway shooting that happened in the East Bay last month. What makes this story remarkable is the dashcam video shared by a couple who were victimized in the incident.

Garrett Mason and his fiance, Tina Do, were driving along Interstate 580 from Oakland to Pleasanton to see their chiropractor on June 15.

Mason said somewhere between Grand Avenue and 150th Avenue, before getting on a freeway onramp, a vehicle ran through a four-way stop and cut them off to quickly get on the freeway.

Dashcam video shows the moment a couple became victims of an apparent freeway shooting on a drive from Oakland to Pleasanton along Interstate 580. California Highway Patrol are investigating the incident that happened in mid-June.

"At that point I also noticed a vehicle driving closely behind us, in retrospect they were following the car in front of us," Mason told KTVU.

He said once on the freeway that both vehicles sped up and weaved through traffic.

"This is when I noticed the first vehicle's passenger get outside of their window, facing backwards. Within a couple seconds I heard gunshots and the windshield burst," said Mason.

The dashcam video captured this terrifying moment that has become all too common along Bay Area freeways.

Mason's fiance can be seen with one eye tightly shut after the impact. Mason checks to see if she's okay. He said they pulled over and called 911. Neither was seriously injured.

CHP Officer Andrew Barclay on Thursday, confirmed the incident and said the investigation is ongoing but had no further details.