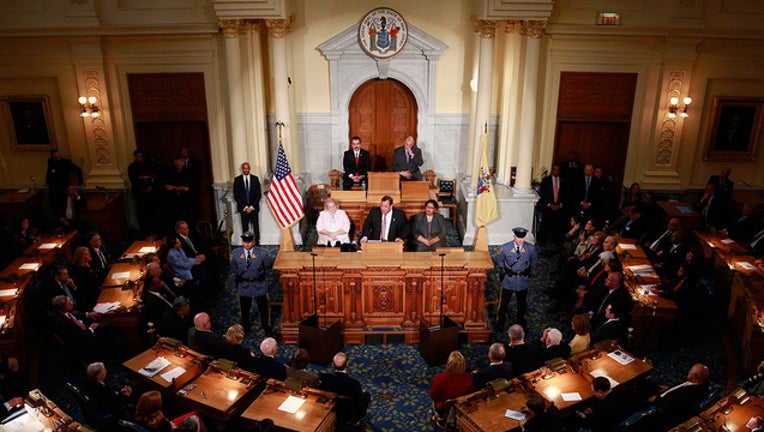 TRENTON, N.J. (AP) - Republican Gov. Chris Christie said he plans in his final year in office to end the stigma of drug addiction and help stem the tide of the drug crisis that is wracking New Jersey and the nation.

The governor shared the story of a drug and alcohol-addicted man who said he had planned to kill himself in 2014. AJ Solomon, of Cherry Hill, said he intended to return home to New Jersey from a treatment center in Arizona and end his life. But he said something unexpected happened in his darkest hour: He paused to pray. Raised Jewish, but not religious, Solomon said it happened on a shuttle bus.

"Either just let me die, or let me get better," Solomon said he prayed at the time. The next day a friend at the treatment center told him that he thought he looked different. "I feel different," Solomon responded.

The 26-year-old Solomon said he has been sober for three years and is set to open a treatment facility next month in southern New Jersey. Christie said Solomon, a former staffer in the governor's office, brought him ideas on ways to improve drug treatment in the state, including easing restrictions on residences used to help addicts recover.

Christie also shared the story of a state worker who attended a candlelight vigil last month that the governor held to raise awareness of drug addiction. Pam Garozzo was there marking her son Carlos' 10 1/2 months of sobriety. Two days later, the 23-year-old man was found dead of an overdose in his mother's car.

"This is the face of the epidemic of addiction that is ravaging the state and our people," Christie said after introducing Pam Garozzo and her husband to a standing ovation.

In New Jersey, about 1,600 people died from drug overdoses in 2015, an increase of about 20 percent over 2014, according to data from the state medical examiner's office. Most of those came from opioids, including heroin and fentanyl.

The National Institute on Drug Abuse estimates that more than 2 million people in the U.S. suffer from substance abuse disorder. Since 1999, the number of unintentional overdose deaths from prescription painkillers has quadrupled, the institute says.

Christie on Tuesday focused in particular on drug addiction's ability to strike not only the poor, but also the well-educated and the wealthy. Solomon is the son of Supreme Court Justice Lee Solomon and Dianne Solomon, a commissioner on the board of public utilities.

"It's been a hard path we've been traveling," Dianne Solomon said. "What you want is to help other families by telling your story."

AJ Solomon struggled with drug addiction while his father was assignment judge of the criminal division - sentencing some people for the same kinds of things his son was doing. He began drinking heavily as a teenager and then started taking prescription painkillers that were prescribed for his father after the judge had a bad bike accident.

He said he felt shame over the addiction, but that gaining his sobriety has shown him what to do with himself.

"I'm really grateful to be a drug addict," AJ Solomon said. "Now I actually have a purpose ... that's a gift."