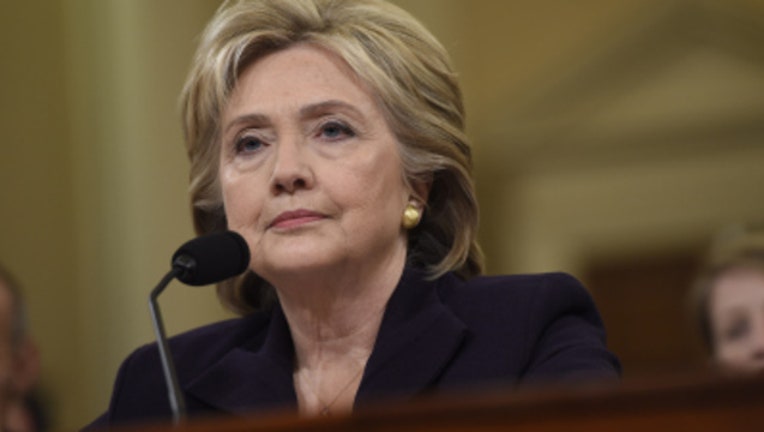 WASHINGTON (AP) — Hillary Rodham Clinton firmly defended her record before, during and after the Benghazi attacks as she came face-to-face Thursday with the Republican-led special investigation of the 2012 violence in Libya, hoping to put to rest the worst episode of her tenure as secretary of state and clear an obstacle to her presidential campaign.

Clinton, the front-runner to win the Democratic nomination, kicked off a long day of questioning with a plea that the United States maintain its global leadership role despite the threat posed to U.S. diplomats. She hailed the efforts of the four Americans who died in the attacks, including the first ambassador in more than three decades, but told the House Benghazi Committee that the deadly events already have been exhaustively scrutinized.

Republicans pressed for answers on her record in the lead-up to the Sept. 11, 2012, attacks on the U.S. diplomatic outpost in Benghazi and a nearby CIA compound, and how engaged she was on the deteriorating security situation in eastern Libya. The atmosphere remained mostly civil until a fiery back-and-forth with Rep. Jim Jordan, R-Ohio, who accused Clinton of deliberately misleading the public by linking the violence to an Internet video insulting the Muslim Prophet Muhammad.

Clinton, stone-faced for much of the hearing, smiled in bemusement as Jordan cut her off from answering. Eventually given the chance to comment, she said only that "some" people had wanted to justify the attack based on that video and that she rejected that justification. The argument went to the origins of the disagreement over Benghazi and how President Barack Obama and his top aides represented the attack in the final weeks of his re-election campaign.

"There were probably a number of different motivations" for the attack, Clinton said, describing a time when competing strands of intelligence were being received and no clear picture had yet emerged. Speaking directly to Jordan, she said: "The insinuations that you are making do a great disservice."

"I'm sorry that it doesn't fit your narrative. I can only tell you what the facts were," Clinton said.

Beyond that exchange, however, there were no gaffes for Clinton and few contentious exchanges. She never raised her voice as she did at a Senate hearing on Benghazi in January 2013, when she delivered the oft-replayed sound bite: "What difference, at this point, does it make?"

Instead, it was the panel's members who engaged among themselves in the nastiest fight as the initial, almost 3½ -hour session ended, with Clinton merely observing. Democrats pressed for the release of the full transcript of a trusted Clinton adviser's private testimony, drawing the Republican chairman, Rep. Trey Gowdy, into an angry debate.

The hearing came at a moment of political strength for Clinton. On Wednesday, a potential rival for the Democratic nomination, Vice President Joe Biden, announced he would not join the race. Clinton also is riding the momentum of a solid debate performance last week. Gowdy says he won't call Clinton to appear a second time.

But Gowdy, a former federal prosecutor from South Carolina, began by laying out a series of questions that he said remained unanswered: Why was the U.S. in Libya, why were security requests denied, why was the military not ready to respond quickly on the 11th anniversary of 9/11 and why did the Obama administration change its story about the nature of the attacks in the weeks afterward?

"These questions linger because previous investigations were not thorough," Gowdy said.

Clinton addressed some of these matters early on. She stressed a need for diplomats to advance U.S. interests in the world, even in dangerous places, and said perfect security can never be achieved. She noted the various attacks on U.S. diplomatic and military installations overseas during the presidencies of her husband, Bill Clinton, in the 1990s and Ronald Reagan a decade earlier.

"In Beirut we lost far more Americans, not once but twice within a year," she said of the 1983 attacks in Lebanon that killed more than 250 Americans and dozens of others. "There was no partisan effort. People rose above politics. A Democratic Congress worked with a Republican administration to say, 'What do we need to learn?'"

Wearing a dark suit, Clinton appeared somber before the panel, holding her chin in her hand while Gowdy interrogated her. She nodded occasionally, such as when the committee's top Democrat, Rep. Elijah Cummings of Maryland, described the entire probe as a partisan campaign replete with implausible conspiracy theories.

The Republican criticism has included contentions by some lawmakers that Clinton personally denied security requests and ordered the U.S. military to "stand down" during the attacks, or that her agency was engaged in an elaborate gun-running scheme in eastern Libya. None of these were substantiated in the independent Accountability Review Board investigation ordered by Clinton after the deadly incident, and seven subsequent congressional investigations.

Gowdy is engaged in his own balancing act, portraying the panel as focused on the facts after comments by fellow Republicans describing the inquiry as an effort designed to hurt Clinton's presidential bid. Democrats have pounced on the remarks, and pointed out that the probe has now cost U.S. taxpayers more than $4.5 million and, after 17 months, has lasted longer than the 1970s Watergate investigation.

The hearing was expected to last the whole day, with breaks. Clinton was certain to face questions about her use of a private email account and server while serving as Obama's chief diplomat, another issue that has beset her campaign.

While Clinton testified, FBI Director James Comey was speaking to lawmakers elsewhere on Capitol Hill, a reminder that she may face more examinations in the months ahead. The FBI has said little thus far about its investigation of the private email server.