Hundreds of millions of years from now, Earth will look unrecognizable as the globe’s largest ocean vanishes, FOX Weather explains.

Hundreds of millions of years from now, Earth will look unrecognizable as the globe’s largest ocean vanishes, and researchers say the continent "Amasia" will form from the collision of North America and Asia.

A study recently published in National Science Review highlights the findings by a team of researchers at Curtin University in Australia.

According to researchers, every year the Pacific Ocean decreases in size by a few centimeters, and with depictions from a supercomputer, they expect a new continent will form in 200 to 300 million years.

"By simulating how the Earth’s tectonic plates are expected to evolve using a supercomputer, we were able to show that in less than 300 million years’ time it is likely to be the Pacific Ocean that will close, allowing for the formation of Amasia, debunking some previous scientific theories," lead author Dr. Chuan Huang, from Curtin University, said in a statement.

The movement of tectonic plates is not a new trend, and Huang said over the last two billion years a supercontinent forms about every 600 million years. 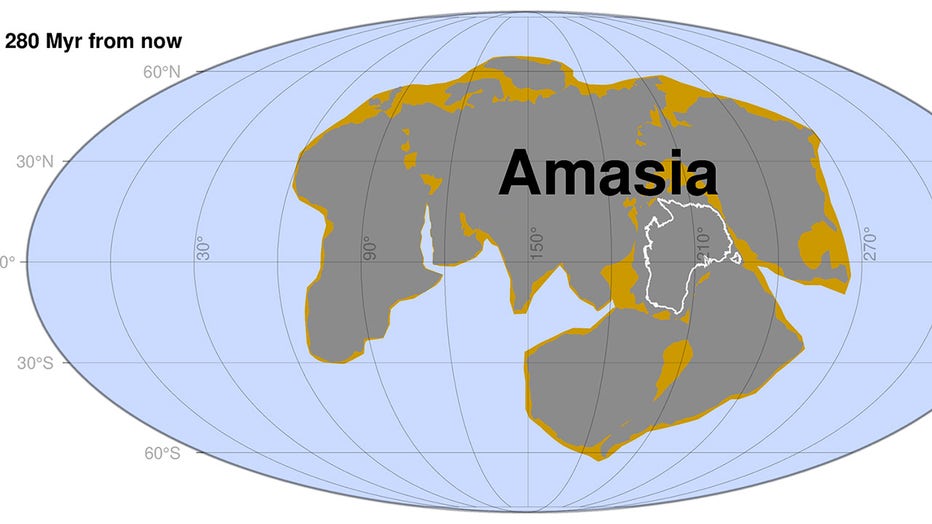 What a future Amasia configuration could look like in 200-300 million years. (Curtin University)

If the latest research is accurate, Earth’s seven continents will slowly merge into one giant landmass, surrounded by what are known as the Atlantic and Indian oceans.

Researchers said a key part of the new supercontinent would be the movement of Australia.

The continent is expected to first collide with Asia, before North America merges with Asia, ending the Pacific Ocean as we know it.

The research team said the Pacific Ocean is what is left of the Panthalassa super ocean and has been shrinking since about the era of dinosaurs.

Panthalassa surrounded the last supercontinent, which experts refer to as Pangaea.

Pangaea is thought to have started breaking apart more than 200 million years ago and led to the land and ocean formations we know today.

With the new continent, climate patterns will change, and a large part of "Amasia" could resemble a desert because of a lack of maritime influence.

"Earth as we know it will be drastically different when Amasia forms. The sea level is expected to be lower, and the vast interior of the supercontinent will be very arid with high daily temperature ranges," co-author Zheng-Xiang Li, from Curtin University, said in a statement.

LINK: GET MORE ON THIS STORY FROM FOXWEATHER.COM