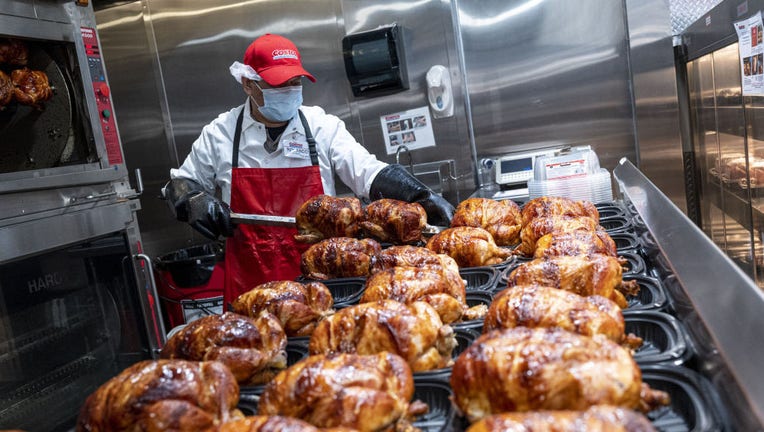 Two Costco shareholders have accused the company of mistreating the birds used to make its popular $4.99 rotisserie chickens in a new lawsuit filed in Washington's Superior Court of King County.

The complaint alleges that Costco "knowingly propagates chickens that are bred to grow so fast that many of them cannot stand under their own weight." It notes that disabled birds are then sent to "dirty, crowded, factory farms run by inexperienced contract growers who Costco recruited and trained" where they "slowly die from hunger, thirst, injury and illness."

"Costco's directors and officers cause and are aware of these illegal practices; and have chosen to ignore red flags plainly illuminating Costco's illegal behavior," the suit states. "They do this as a way to save money, hold firm to a key business strategy driving foot traffic in stores, and increase profits, in violation of their fiduciary duties."

According to the suit, the company's practices are illegal in Iowa and Nebraska, two states where Costco keeps chickens.

"Once lauded as an innovative warehouse club, Costco today represents a grim existence for animals who are warehoused in inescapable misery," Legal Impact for Chickens President Alene Anello, who represents the shareholders alongside the Animal Law Offices, PLLC, said in a statement. "Costco’s executives must agree to follow both the law and general decency in order for Costco to resume being seen as an industry leader."

A Costco spokesperson did not immediately return FOX Business' request for comment on Thursday. However, the company previously told FOX Business that it is "committed to maintaining the highest standards of animal welfare, humane processes and ethical conduct throughout the supply chain" following similar scrutiny from Mercy for Animals last year.

In 2021, Costco sold 106 million of its rotisserie chickens.

The rotisserie chicken's $4.99 price tag has remained the same since 2009.