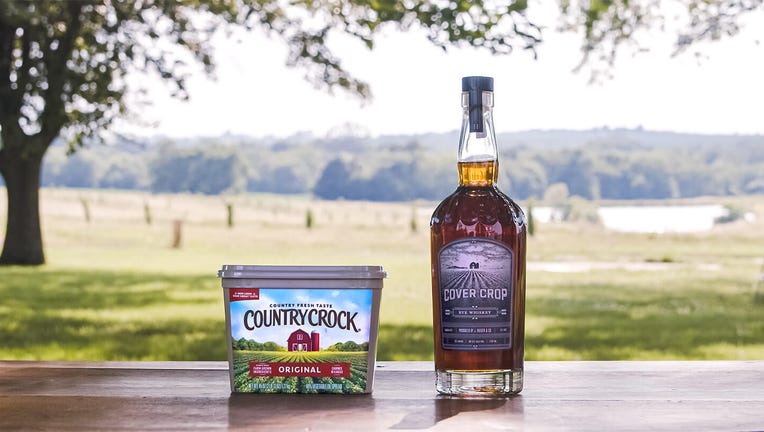 Country Crock, known for its margarine spread, is expanding into the whiskey business in an effort to ensure healthy soil remains available for future generations of farmers.

The brand’s new limited Cover Crop Whiskey is described as "buttery smooth" and blended with "a touch of whiskey distilled with cover crop cereal rye."

Each bottle, which appears to run for about $40 on the spirits marketplace Mash&Grape, features a 46.5% alcohol by volume.

RELATED: Does 'hair of the dog' actually work after drinking alcohol? What experts say about the hangover 'cure'

The connection between butter spread and whiskey

Country Crock’s popular buttery spread, which has been churning out of Johnson County, Kansas, for over 30 years, is plant-based and made from farm-grown ingredients like soybean oil, palm fruit oil, avocado oil and olive oil. But Upfield, the company behind Country Crock, says farmers are dealing with soil fatigue "from planting and harvesting the same crops over and over again."

This issue leads to soil erosion and deteriorating nutrients in the soil, the brand said in a statement.

As a result, Country Crock has zeroed in on something called cover crops, which are plants grown in between harvested crops to improve soil health by returning nutrients, minimizing pests, and increasing water retention.

"This has proven to be a sustainable way to keep the land healthy, and reduce greenhouse gas emissions by returning carbon to the soil as a nutrient," a statement from the brand reads. "Still, many farmers have yet to adopt the use of cover crops, and the general public is hardly even aware of them."

What are greenhouse gases?

The U.S. Environmental Protection Agency defines greenhouse gases as those that trap heat in the atmosphere.

This led Country Crock to team up with ad agency Ogilvy and J. Rieger & Co., a Kansas City-based distillery, to develop the special whiskey and the Cover Crops Project, which aims to provide Kansas-area farmers with financial resources and training to plant cover crops.

Only about 500 bottles of the special batch of rye whiskey were made, according to FoodAndWine.com.