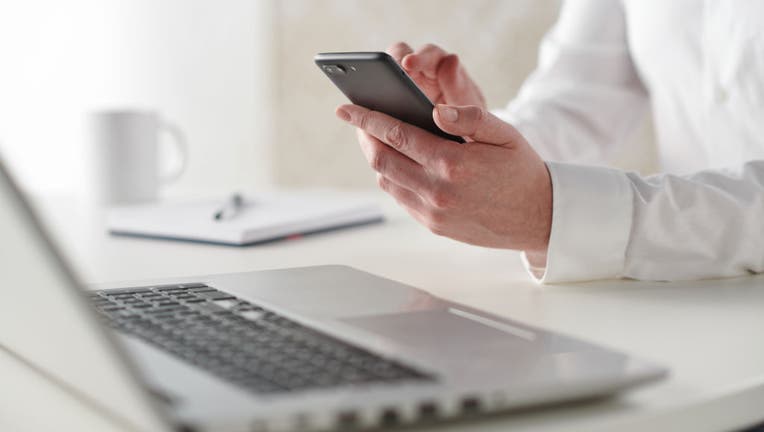 Close up detail of a businessman working at a desk with a smartphone and laptop computer, taken on January 31, 2019. (Photo by Neil Godwin/Future via Getty Images)

The U.S. Customs and Border Patrol is reminding Americans that a fraudulent phone call appearing to be affiliated with the agency that solicits money is persisting across the country.

The agency first warned of the scam earlier this year and told FOX Television Stations this week that the calls are continuing.

"Individuals across the country continue to receive unsolicited calls from scammers posing as U.S. Customs and Border Protection officers or U.S. Border Patrol agents," a public affairs specialist with the CBP said.

The agency said someone on the line might say that "a box of drugs and money being shipped has your name on it and has been intercepted." Others reported calls from individuals claiming to be CBP employees and informing call recipients that there is a warrant for their arrest or requesting information in exchange for Bitcoin.

"Scammers attempt to cloak themselves in legitimacy by providing names and numbers of actual CBP employees and urging their potential victims to search the officer/agent on the internet," the agency warned.

In most cases, the resident is eventually instructed to provide banking information or other personally identifiable information, such as social security numbers or dates of birth.

"CBP does not solicit money over the phone, nor do we accept Bitcoin other digital currency or gift cards," the agency said. "Residents nationwide should remain vigilant of scams/phishing attempts and not provide any information."

If this scam was attempted on you, federal authorities are asking you to report it. The report is shared with more than 3,000 law enforcers to help bring cases against fraud, scams and bad business practices.

Learn more about how to make a report here.