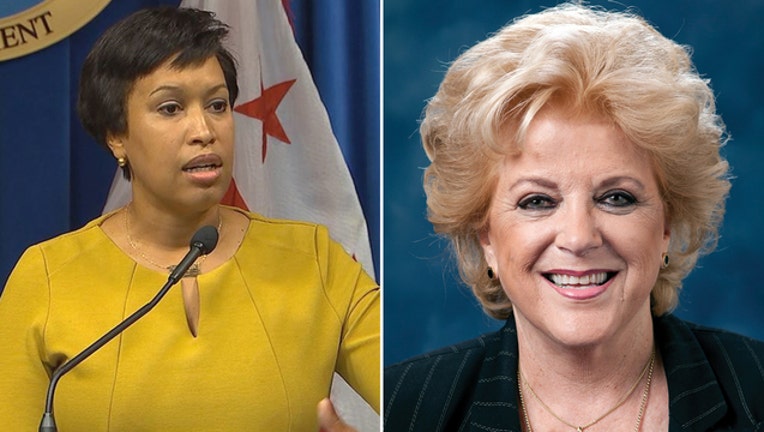 WASHINGTON - DC Mayor Muriel Bowser has made a wager against Las Vegas Mayor Carolyn Goodman over the outcome of the upcoming Stanley Cup Finals, as The Washington Capitals face off against the Vegas Golden Knights Monday.

The Caps were sent off to the finals by over 6,000 fans on Saturday from the Kettler Iceplex in Arlington.

The two city leaders made their announcements on Twitter, saying that the mayor of the winning team would get a basket of treats from local businesses of losing city and have bragging rights, while the losing mayor would wear the winning team's jersey.

With the Cap's popular hashtag #ALLCAPS,  the two mayors took the bet even further to change their text on social media -- Mayor Goodman made her entire Twitter page and Tweets in lowercase, with the hashtag #nocaps.

"happy to announce we have a #stanleycupfinals bet with @mayorbowser in dc. losing city’s mayor will wear winning city’s jersey and send a local treat basket. you may have noticed there are #nocaps in this tweet. we are cap free in @cityoflasvegas. #nocaps #goknightsgo"

To which Bowser replied, "VERY CUTE. LET THE GAMES BEGIN! (THIS MESSAGE IS IN #ALLCAPS)"

Nevada Congresswoman Dina Titus and District of Columbia Delegate Eleanor Holmes Norton also made a bet over the upcoming matchup -- using the wager to bring policy into play.

Titus' office said in a statement Thursday that she and her staff will wear T-shirts advocating D.C. statehood if the Capitals win.

If the Golden Knights win, Norton and her staff will find a way to display their opposition to a plan for the Yucca Mountain nuclear waste dump in Nevada.

Norton says both D.C. and Vegas "know what it is like to have the federal government trample on you."

Norton and Titus also say the loser of their bet will give a basket of local goods to the other.