What to know about listeria

According to the U.S. Centers for Disease Control and Prevention (CDC), Listeriosis is an infection usually caused by eating food contaminated with Listeria monocytogenes.

One person died and 13 have been hospitalized across six states in a listeria outbreak that was linked to contaminated deli meat and cheese, the U.S. Centers for Disease Control and Prevention said Wednesday.

The listeria outbreak has infected at least 16 people in total from April 17, 2021, to Sept. 29, 2022, the CDC said. Three people became sick in Maryland, and one died. Seven people were reported ill in New York, two people in Illinois, two in Massachusetts, one in New Jersey, and one in California, according to the agency.

The CDC said that one person got sick during their pregnancy, which resulted in pregnancy loss.

The sick people ranged in age from 38 to 92, the CDC said. Of the 13 people who shared information about their ethnicity with the agency, 11 are of Eastern European background or speak Russian.

"Public health officials collect information about the age, ethnicity, and other demographics of sick people, and the types of foods they have eaten, to provide clues that can help identify the source of the outbreak," the agency noted.

The CDC stressed that there might be more recent cases, but it usually takes three to four weeks to determine if a sick person is part of an outbreak.

"The true number of sick people in this outbreak is likely higher than the number reported, and the outbreak may not be limited to the states with known illnesses," the CDC said. 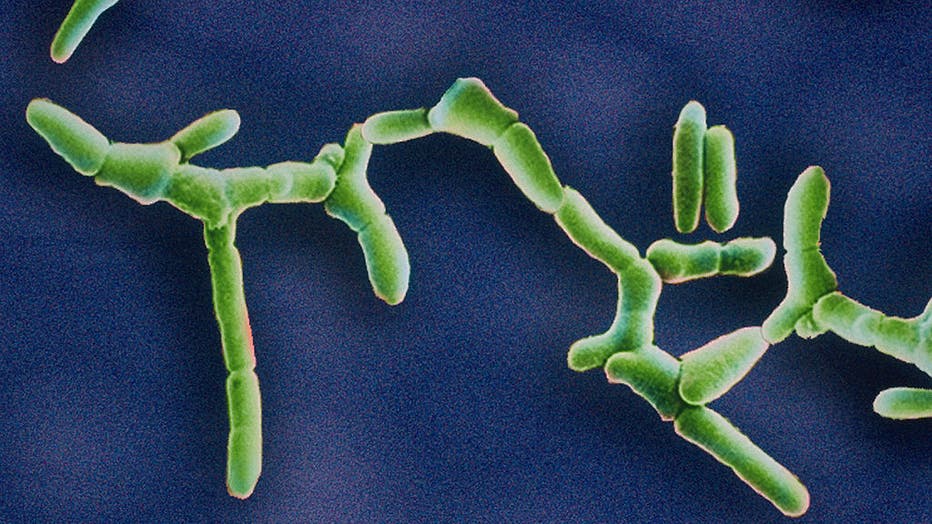 FILE - The bacterium Listeria monocytogenes is pictured under magnification. (Photo By BSIP/UIG Via Getty Images)

State and local public health officials are interviewing people about the foods they ate in the month before they got sick. Of the 12 people interviewed, 11 reported eating meat or cheese from deli counters, the agency said.

Among seven sick people in New York, five bought sliced deli meat or cheese from at least one location of NetCost Market, a grocery store chain that sells international foods. Sick people from other states purchased deli meats or cheeses from other delis, the CDC noted.

"Investigators do not believe that NetCost Market delis are the only source of illnesses because some sick people in the outbreak did not shop at a NetCost Market," the agency stated. "A contaminated food likely introduced the outbreak strain of Listeria into delis in multiple states."

People most at risk for severe illness from listeria infection

The CDC estimates that listeria infection is the third leading cause of death from food poisoning in the United States. An estimated 1,600 people get sick each year, and about 260 die, according to the agency.

Listeria is most likely to sicken pregnant women and their newborns, adults 65 or older, and people with weakened immune systems. Other people can be sickened by a listeria infection, but they rarely become seriously ill, the CDC says.

Those at high risk of severe illness from listeria infection were urged to not eat meat or cheese from any deli counter unless it is reheated to an internal temperature of 165°F or until "steaming hot," the agency said in its announcement.