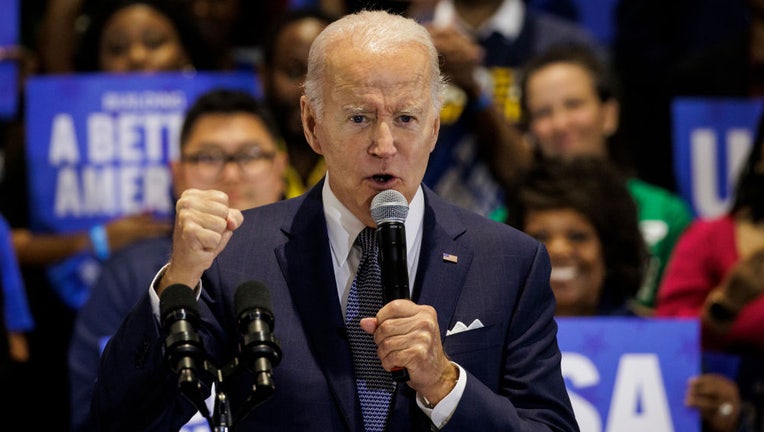 President Joe Biden speaks during a Democratic National Committee event at the headquarters of the National Education Association on September 23, 2022 in Washington, DC. (Samuel Corum/Getty Images)

CINCINNATI - Democratic House candidate Greg Landsman can tick off how his party's control of Congress and the White House has benefited his city.

But Landsman won't say whether President Joe Biden, who signed those measures into law, will help or hurt his campaign to unseat longtime Republican Rep. Steve Chabot. He doesn't think the president will visit the southwest Ohio swing district before the November midterm elections and insists that, in thousands of conversations while campaigning, Biden usually "just doesn't come up."

Officeholders and top candidates often distance themselves from their party’s unpopular president. Some Republicans shunned Donald Trump ahead of the 2018 midterms when Democrats flipped the House, just as many Democrats ran away from Barack Obama as 2010's red wave loomed. George W. Bush and Bill Clinton suffered similar midterm election fates.

But this cycle presents conflicting political incentives that have forced some front-line Democrats into delicate balancing acts. While improving lately, Biden’s approval ratings remain low and inflation is still running near record highs. Yet unemployment is down, wages are up and the White House has notched key congressional wins applauded by many Democrats in close races.

The predicament underscores the lack of a national Democratic playbook on how to run in relation to Biden ahead of the midterms.

"These issues become, especially in places like Cincinnati, Greater Cincinnati, very local very quickly," said Landsman, a City Council member whose hesitancy to mention Biden is a change from his appearance with the president in Cincinnati in May.

Two hundred miles north in Toledo, Democratic Rep. Marcy Kaptur, the longest-serving woman in House history, has been more direct, producing an ad saying she "doesn't work for Joe Biden" mere weeks after greeting the president at the Cleveland airport in July.

Democratic Rep. Tim Ryan, running for Ohio's open Senate seat, appeared with the president at the recent groundbreaking of an Intel computer chip factory outside Columbus. But he suggested then of the possibility of Biden seeking reelection in 2024 that both parties need "new leadership" and "it’s time for a generational move."

When Biden visited Milwaukee on Labor Day, Democratic Gov. Tom Evers, who is up for reelection, appeared with him, but Democratic Lt. Gov. Mandela Barnes, competing against Republican Sen. Ron Johnson, did not. In Maine, Democratic Rep. Jared Goldenhas an ad saying he opposed "trillions of dollars of President Biden’s agenda because I knew it would make inflation worse." Democratic Arizona Sen. Mark Kelly is giving Biden's performance "mixed reviews."

Landsman says he appeared with the president because he supported White House-backed microchip legislation that helped make the new Intel facility a reality. Kaptur says she appeared with Biden because he was announcing $1 billion for Great Lakes improvements and got a firsthand look at the town of Lorain, which has been devastated by steel mills closing.

"There’s some other things I don’t agree with the president on. But that one — getting attention to Lorain, Ohio, which has endured such a battering in the international markets, and the people are still so positive and so constructive," she said, "it was a great moment."

Phil Heimlich, a former Cincinnati City Council member and Republican county commissioner who opposes Trump and has endorsed Landsman, said Democrats’ struggles with Biden are real but pale in comparison to GOP candidates contending with a national party increasingly beholden to his predecessor.

"I think the national stuff still plays a role," Heimlich said, "but that cuts both ways."

"I think people know Pelosi and Biden. Some people are favorable. But I don’t think that’s the majority," said Chabot, who has criticized Landsman for briefly working in Nancy Pelosi's Washington office in 1999, before she was House speaker. He's also tagged tweets about rising prices #Bidenflation.

Majewski said in his first TV ad that "Biden and Kaptur are spending more and more while inflation goes up and up."
Chabot was first elected to Congress in 1994 and has won several hotly contested reelection races. But Ohio's new congressional maps mean his territory encompasses more of Democrat-friendly Cincinnati.

A recent Landsman campaign event included his releasing a 5-year-old wire-haired dachshund named Jerome in a wiener dog race as Oktoberfest celebrations thronged the city's downtown. Chabot, that same weekend, greeted would-be voters at a smaller, Catholic church-sponsored street festival in the nearby town of Reading, where he was born.

"I know a lot of people who are not Democrats and they are definitely going to be voting," Jean Huneck, a 67-year-old who owns a small mechanical engineering business, said of the new, ostensibly bluer district. Huneck is a registered Democrat but supports Chabot and said the GOP needs big November wins to counter Biden.

"I feel like our livelihoods are depending on it," she said.

Kaptur has held her seat since 1983 but faces circumstances opposite from Chabot's. Redistricting swapped parts of her district's largely blue Cleveland suburbs for a conservative, eastern swath of the state that hugs Lake Erie and reaches the Indiana border.

Some of the new territory is dotted with cornfields and bait and tackle shops. An occasional yard sign says "Trump 2024 or Before," a reference to the former president's spurious suggestions he could be reinstated into power.

Majewski is Trump-endorsed, and Kaptur has branded him as a past devotee of QAnon conspiracy theories who passed police barricades during last year's deadly insurrection at the U.S. Capitol. Kaptur says in a TV ad that her opponent is "too dangerous to serve in Congress."

The National Republican Campaign Committee, the party's House campaign arm, promoted a photo of Biden kissing Kaptur's hand upon arriving in Cleveland and a video of her saying that, after a year in office, the president's "report card is outstanding" juxtaposed with headlines about inflation and the president’s sinking approval ratings.

Following an Associated Press report that Majewski misrepresented his military career, the NRCC canceled TV ads it had booked to support his campaign.

Brendan McHugh, a 31-year-old who works in investment real estate in Toledo, said linking Biden and Kaptur isn't a bad thing because "Democrats have been getting some wins recently."

"I've been pleased with the progress that the Biden administration's been making," McHugh said, calling that "a net positive" for Kaptur.

Michael Jones, a 56-year-old attorney who lives in the same Old Orchard neighborhood near the University of Toledo, said that he's a Kaptur supporter and that controlling things like inflation is largely out of Biden's hands. But he added, "There’s a lot of challenging things happening right now."

"People may look at who's at the top right now," Jones said. "And it may impact how an undecided person might vote."